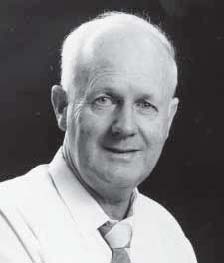 John's start in crystallographic research was in 'Old Chemistry' (now the Department of Pharmacy) at the U. of Sydney. He collected and visually estimated 929 diffracted intensities (another possible 331 were very weak and were not observed) on the crystal structure of potassium bis-biureto-cuprate (II) tetrahydrate using a Metropolitan- Vickers 'Raymax' X-ray generator with a demountable tube. He had manually corrected them for Lorentz, polarization and Tunell effects but not, at this stage, for absorption. He then disappeared home for quite a few weeks and graphically calculated absorption factors for all of his data. Subsequent cycles of Fourier and Least-Squares refinement (thanks to SILLIAC programs written by H C Freeman) led to the placement of all hydrogen atoms in the structure.

Sydney U. has a long history of X-ray analytical work, going back to the early 1930s. This short obituary is important for historical reasons as well as reflecting on the life of John Taylor and his early work (at Sydney U.) of which not many people have knowledge. John's work there commenced in the era before computers in Australia and was completed with the aid of the 'SILLIAC', Australia's second and then best electronic digital computer.

In August 1962, John met Mavis McKinnon who was to become his wife. John was awarded his Ph.D. in 1963 for his thesis 'Crystal Structure Analysis by X-ray and Neutron Diffraction Methods'. In 1981, the U. of NSW awarded John the Degree of Doctor of Science in recognition of his research excellence.

John became interested in the Rietveld method after reading Hugo Rietveld's initial papers on quantification of mineral phases from X-ray powder diffraction, adapting the single crystal program (ORFLS) for profile analysis for his research. This work was the early beginnings of the software program SIROQUANT that allowed multi-phase quantitative analysis of a wide range of materials. That John developed the algorithms from first principles allowed him to incorporate some innovative features, such as the use of observed HKL files for analysis of materials that have a poorly crystalline or amorphous nature.His research was leading edge although, to his colleagues, the apparent ease with which he succeeded in solving the most complex problems was daunting.

SIROQUANT has undergone considerable enhancements since those early days and is now one of the most popular programs for quantitative XRD sold throughout the world.

John was the classic individual researcher, best described as the quiet achiever, who shunned the tedium of budgets and management constraints but always delivered on his research. He was also an accomplished pianist and landscape painter of considerable merit. His painting commenced as a relaxation at the age of 40. He leaves a widow, Mavis, and two children, Phillip and Karen.