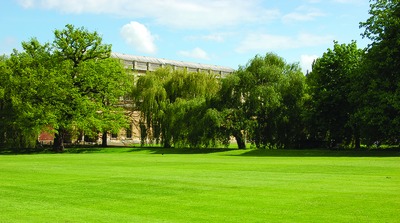 Just occasionally someone has an idea so profound that it changes the world and how we see it. One such idea reported in the very first science paper written by a 22-year-old graduate student has turned out to be one of the most influential.

G. H. Hardy wrote 'The mathematician's patterns, like the painter's or the poet's, must be beautiful; the ideas, like the colours or the words, must fit together in a harmonious way. Beauty is the first test'. In the afterglow of IYCr2014, it is worth celebrating Bragg's equation, which earned Lawrence Bragg and his father, whose X-ray spectrometer powered its exploitation, the Nobel Prize in Physics 100 years ago. It is a testament to the beauty and power of this discovery that he is still the youngest person ever to receive a Nobel Prize for science.

Lawrence Bragg had a remarkable mind. He had entered the University of Adelaide at 15 to study mathematics, moving to England at 18 when his father transferred to Leeds, and entered Trinity College Cambridge to again read mathematics. After a year at Trinity, upon his father's advice, he changed to physics (Natural Science). Yet as a new research student in the Cavendish Laboratory, he was unhappy. In his own words: 'It was a sad place at the time. There were too many young researchers ... too few ideas for them to work on, too little money, and too little apparatus.'

Despite this malaise, three key aspects converged within the mind of that young postgraduate student as he walked behind St John's College, Cambridge, one evening. It is perhaps interesting to look back at the events that culminated in that Damascene moment. It had all started a few months before when he joined his parents in Cloughton, on the Yorkshire coast, in the summer of 1912.

His father had just received a letter from his Norwegian friend Veygard, who described a lecture given by von Laue in Würzburg (where Veygard was working with Röntgen) in which he described how, on passing a beam of X-rays through a crystal, he obtained a series of spots in a pattern having the same symmetry as the crystal on a photographic plate. Laue had claimed this was due to 'diffraction' from waves. This set the Braggs off on their adventures. As his father believed X-rays were not waves but more like corpuscles or 'bullets', he and his father set about trying to explain the photograph in other ways.

Upon returning to Trinity, three things came together in Lawrence’s thoughts. First, J. J. Thomson had suggested in his lectures that X-rays were waves generated by the sudden stopping of electrons by a target. Secondly, C. T. R. Wilson, whose optics lectures he had attended, had shown white light could be considered as a continuous range of wavelengths (or pulses, as he called them). Finally, upon attending a Trinity College Science Society meeting he heard a paper suggesting that atoms in crystals could be thought of rather like spheres arranged in parallel sheets.

'I can remember the exact spot in the Backs where the idea suddenly leapt into my mind that Laue's spots were due to the reflection of X-ray pulses by sheets of atoms in the crystal' (unpublished memoirs). However, he soon hit upon a problem: his new theory didn’t match up with Laue's spot pattern obtained on cubic zinc blende. His mind went back to the Science Society meeting, where the presenter had explained that cubic crystals need not only have spheres located at the corners but also on the faces of the cubes. With this last piece of information everything clicked into place. In his famous paper to the Cambridge Philosophical Society in 1912 he famously proposed that Laue's results arose from the reflection of a continuous range of X-ray wavelengths (unlike the 6 or 7 distinct wavelengths assumed by Laue) by planes of atoms within the crystal. This interpretation yielded Bragg's law of X-ray diffraction: nλ = 2dsinθ, where θ is the angle of incidence of X-rays of wavelength λ, d is the separation of the reflecting planes and n is an integer.

Armed with this equation, and his father's X-ray spectrometer, they worked furiously in 1913 and 1914, going back in the evenings to the deserted university to obtain more and more measurements. He said it was like 'discovering a goldfield with the nuggets just lying there to be picked up. One could not resist the temptation to pick up more and more, without a rest'.

It is interesting to note that not until after the First World War did the world really wake up with shock and exhilaration to these papers; shock, because Bragg had incontrovertibly established, contrary to what all chemists thought at the time, that there was no molecule of sodium chloride inside rock salt - simply an extended alternation of sodium and chloride ions. Henry Armstrong, a former president of the Chemical Society of London, wrote in Nature in 1927 that the 'chess-board pattern' of atoms in sodium chloride was 'repugnant to common sense' and 'absurd to the nth degree'. Others were exhilarated because the structure of diamond confirmed the tetrahedral coordination of carbon as envisaged by J. H. van't Hoff and others some 40 years earlier.

Moseley, who would not have completed his ground-breaking work without one of William Bragg's spectrometers, wrote to his mother after giving a lecture at which William Bragg was present: 'I was talking chiefly about the new German experiments of passing X-rays through crystals. … After much hard work Darwin and I found out the real meaning of the experiment, and of this I gave the first publication on Friday. I know privately however that Bragg and his son had worked out an explanation a few days before us, and their explanation although approached from a different point of view turns out to be really the same as ours. We are therefore leaving the subject to them. The subject is very important, and there will probably be an enormous amount of work done on it in the next few years'. Of course the subject hasn't been left to them and has maintained our interest over the last 100 years. Indeed, X-ray crystallography has transformed the very fabric of mineralogy, chemistry, metallurgy and biology, with vast databases holding X-ray-determined structural information on millions of compounds, inorganic, organic and biological, and contributed to more than two dozen Nobel Prizes.

So next time you see a student stopped in their tracks, leave them to their thoughts ... they might just have thought of something really beautiful.