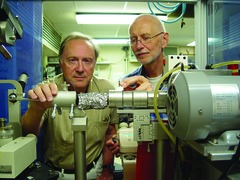 The newly established prestigious award established jointly by the Foundation for Polish Science (FNP) and the American Association for the Advancement of Science (AAAS) honors pairs of collaborating scientists from these two countries. The first such award went to two macromolecular crystallographers for their studies on important proteins of medical relevance, which contributed to the development of therapies combating, among others, AIDS and leukemia. The recipients, selected from more than 50 nominations, are Mariusz Jaskolski from the Adam Mickiewicz U. and the Inst. of Bioorganic Chemistry in Poznan, Poland, and Alexander Wlodawer from the National Cancer Inst., USA. Both of them are very well known in the world-wide community of structural biologists for their high-impact publications, services on various scientific bodies, and presentations at many conferences and meetings.

Their collaboration began almost 30 years ago, when Jaskolski joined the laboratory of Wlodawer at the National Cancer Inst. and made an important contribution to the solution of crystal structures of retroviral proteases from the avian Rous sarcoma virus and from the human HIV-1 virus. This work paved the way for the development of successful drugs against AIDS by several pharmaceutical companies, after only 7 years of effort. As a result, AIDS is not any more a terminal disease.

After returning to Poland Jaskolski established the first macromolecular crystallography laboratory in Central Europe, and his collaboration with Wlodawer continues to this day. Among a number of collaborative accomplishments, of note is the structure solution of asparaginase, a target in the therapy of acute lymphoblastic leukemia.

Wlodawer and Jaskolski not only collaborated on a variety of research projects, but also published jointly a number of educational and instructive papers on crystallographic methods and techniques. Together, they co-authored 37 publications which to date have received more than 2,500 citations. The first FNP/AAAS prize for collaborative USA-Polish research accomplishments emphasized the importance of biocrystallography to human society. It went to a pair of highly deserving recipients.