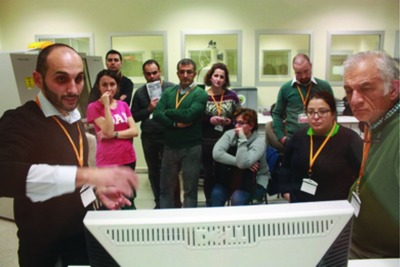 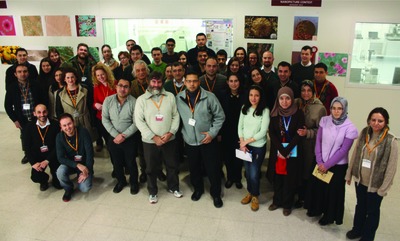 The OpenLab Turkey, organized within the frame of the International Year of Crystallography 2014 in collaboration with UNESCO and IUCr, was held in the campus of Bilkent U. at the National Nanotechnology Research Center (UNAM), January 19-22, 2015. The OpenLab logistics and organization were taken care of by the U. of Bilkent (Eda Yilmaz) and the Turkish Crystallographic Association (Süheyla Özbey) with the support of the IUCr, PANalytical BV, Atomika Teknik and UNAM.

The aim of the OpenLab was a broad introduction to the basics of crystallography, focusing on the theory and practice of powder diffraction, and on specific applications in the field of cultural heritage. Thanks to the powder diffractometer installed at UNAM, the attendees had the chance to participate in hands-on training with powder diffraction data collection and interpretation.

The scientific lectures during the four days of the OpenLab were delivered by Gilberto Artioli (U. di Padova, Italy). They included the nature of X-rays and their interaction with matter, basics of crystallography and diffraction, the experimental geometries for powder diffraction, data interpretation (including phase identification, quantitative phase analysis, available software, and databases) and an introduction to full profile refinement. Marco Sommariva (PANalytical) covered most of the applied aspects, such as the details of instrumental components, calibration and practical data collection.

A special effort was devoted during the OpenLab to present and operate freely available software, such as GSAS, and open-access databases, such as COD, in an attempt to direct the attendees towards independent crystallographic activities.

Extensive hands-on laboratories involving data collection on the available instrumentation and demonstrations on data treatment and analysis were followed with extreme interest. All the attendees showed a very active participation during sample preparation and basic measurements, as the participants also had the opportunity to measure their own samples and consult experienced crystallographers on specific cases. A few advanced applications were also shown, with the focus on materials science and application to cultural heritage. The session on cultural heritage was nicely complemented by lectures on archaeometry in Turkey (Ali Akın Akyol), on the use of nanoparticles for the conservation of paper material (Ayşen Yılmaz), and on the use of pair distribution function analysis (Bora Kalkan). The afternoon of the last day was devoted to a visit to the splendid Museum of Anatolian Civilizations in Ankara's old city centre.

The OpenLab Turkey event brought together over 30 participants from several countries (besides Turkey, attendees were from Albania, Egypt, Ethiopia, Iraq, Italy and Uzbekistan), selected on the basis of interest and country of origin from about 150 applications, the number of applications testifying the high interest for the event. All participants who successfully completed the lectures received a certificate of attendance. The participants were PhD students, researchers and young professionals from industry.

Very positive feedback was expressed by the participants during and at the end of the OpenLab event, both concerning the presentations and the practical sessions. The general impression is that the spirit and aims of IYCr2014 were conveyed, and that great interest has been aroused for future schools and workshops. Many participants repeatedly asked for future training and follow-ups.

On the final day the local committee met to discuss potential follow-ups, because not all the budget allowed for the event was actually spent. The proposal from the local committee was to organize a follow-up hopefully led by the Turkish Crystallographic Association. The idea is to combine training in basic powder diffraction and selected advanced applications, possibly transforming the event into a periodic school to beheld in different Turkish universities. There is a strong desire to consider the OpenLab as the triggering event for a regular and sustainable school for the Turkish (or even an enlarged) community. Periodic crystallographic training under the auspices and support of IUCr is envisaged. Prof. Artioli presented the recommendations to the IYCr2014 legacy ceremony in Rabat in April 2015