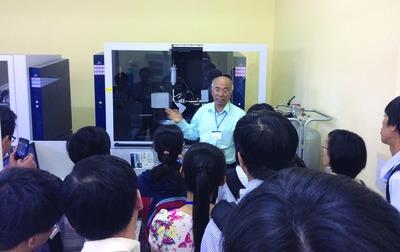 Students and instructors participating in the Bruker OpenLab in Vietnam.

The IUCr-UNESCO OpenLab Vietnam, organized in partnership with Bruker, was held at the Chemistry Dept. of the Vietnam National U., Ho Chi Minh City-U. of Science (VNUHCM-US) and the Center for Molecular and NanoArchitecture(MANAR), Ho Chi Minh City, in conjunction with IYCr2014 from December 8 to 12, 2014, with the purpose of promoting crystallographic teaching and research in South-East Asia.

The Opening Ceremony on Monday, December 8, was chaired by Nguyen Thi Thanh Mai, Dean of the Chemistry Department of the VNU-HCM-US, and a welcome speech was given by Vu Hai Quan, Vice-President of the VNU-HCM-US. After the opening session, Luc Van Meervelt started his intensive crystallography course on symmetry, X-ray diffraction, and single-crystal structure determination and refinement. The afternoons of the first three days were mainly dedicated to further exercises, supervised by Nguyen Bich Ngan (Hanoi), on point, plane and space groups, structure factor calculations, and a number of demonstrations such as Fourier transform and the use of the Cambridge Structural Database.

During the last two days, the participants visited the MANAR Center in smaller groups, where they could assist at a demonstration of crystal mounting and data collection and had the opportunity to collect diffraction data from their own crystals. In addition, data reduction, structure elucidation and refinement steps were introduced by Thanh-Ha Nguyen (Bruker AXS Singapore) and Bohari Bin Mohd (Malaysia) during hands-on training sessions.

During this five-day course, the lecturers aimed to introduce the main aspects of a single-crystal structure determination, andat the end each participant was able to solve and interpret independentlya crystal structure, as well as prepare CIF files for publication. In total 112 participants attended the course, including 12 international guests (from Thailand, Malaysia and Canada), 12 from outside Ho Chi Minh City and 84 from different institutes and universities in Ho Chi Minh City. Thanks to financial support from the IUCr, the MANAR Center and the VNU-HCM-US,the OpenLab Vietnam could be organized successfully, and the participants were very enthusiastic when they received their certificates during the Closing Ceremony.