Lighting the Way for a Brighter African Future

A movement is growing to construct an advanced light source somewhere on the African continent in the near future. It has been dubbed the African Light Source (AfLS) and has been long discussed within Africa and globally. To formally initiate that goal, many of those in the discussion called for nominations to an Interim Steering Committee for the AfLS (ISC-AfLS). On August 18, 2014, the ISC-AfLS was formally launched on the Forum Day of the 'African School on Fundamental Physics and its Applications', held at the U. of Cheikh Anta Diop in Dakar, Senegal. ISC members represented a broad spectrum of countries from both inside and outside of Africa, including Egypt, Ethiopia, France, Japan, Nigeria, Rwanda, Senegal, South Africa, Sweden, United States and Zimbabwe.

The role of the ISC-AfLS was to initiate a transparent, inclusive and democratic process, culminating in a Conference and Workshop, where it could dissolve itself so that a more inclusive, fully mandated Steering Committee for the African Light Source (SC-AfLS) could be elected. With that foundation, the vision of an AfLS would gradually be able to take form and mature, attracting support. Thus, a subgroup of the ISC and the leadership of the European Synchrotron Radiation Facility (ESRF) convened the First African Light Source Conference and Workshop during November 16-20, 2015, at the ESRF (Grenoble, France). Fig. 1 is a group photo of the participants, and Fig. 2 shows several of the researcher and student participants along with two traditional African ceremonial sticks. The larger stick metaphorically summoned the participants and 'allowed' the opening of the meeting, and each speaker held up the smaller stick, which gave the authority to speak. This was the first in a series of AfLS meetings, with most of the subsequent meetings to be held in Africa. The organizers decided that the first meeting's venue should be at a flagship international facility so that policymakers, students and others not familiar with advanced light sources would be able to tour a fully operational facility.

The first international AfLS meeting was a huge success. Divided into two parts, the first two days took the form of a conference that consisted of presentations on research at light sources by African scientists, as well as research by both Africans and non-Africans on topics highly relevant to Africa. The second part of the meeting was a workshop where the participants, numbering approximately one hundred, discussed strategy and policy. One of the main outputs of the workshop was the adoption of a set of overarching statements that provide the WHY for an AfLS. They decided to call those statements the Grenoble Resolutions, and they are as follows:

To move the project forward, the participants also adopted a Roadmap to guide future activities. It consists of short- (within 3 years), medium- (within 5 years) and long-term (5 years and beyond) goals. Major activities in the short term include training large numbers of African scientists, engineers, students and technicians in the design and utilization of advanced light sources; enhancing the existing community of light source users; establishing formal partnerships with existing international light sources; promoting the involvement of industry; establishing and enhancing Africa's current and needed critical feeder infrastructure that empowers light-source science; promoting outreach and communication around light-source-based science; studying the feasibility of constructing African multinational beamlines at existing light sources, perhaps with partners from other regions of the world; developing a Strategic Plan for submission to African Ministries; and developing an AfLS non-site specific Pre-Conceptual Design Report, which specifies the scientific case for an AfLS along with its various components, including the accelerator complex, experimental beamlines and ancillary facilities. In the medium term, the main elements include studying the feasibility of constructing an AfLS, including costs, and appointing a Task Team approved by African governments to develop a detailed Business Plan and Governance Model for an AfLS. In the long-term, the Roadmap calls for the completion of an AfLS Technical Design Report that includes site selection and, when approved by a sufficient number of African governments, the construction of a fourth-generation light source with requisite infrastructure. Finally, to drive the Roadmap forward, the AfLS meeting participants and others via online balloting elected a fully mandated Steering Committee for an AfLS, with one of us (SHC) as Interim Chair.

By far the largest community of advanced-light-source users in Africa is in South Africa. Over the years, one of us (SHC) has documented that history. The first users were Trevor Derry and Jacques Pierre Friederich 'Friedel' Sellschop, both from the U. of the Witwatersrand (Wits). In 1994, Derry performed studies of diamond surfaces at both the ESRF and the Synchrotron Radiation Source-Daresbury Laboratory (UK). During the same year, Sellschop participated in other diamond studies at the ESRF. In 1996, Giovanni Hearne, then at Wits and currently at the U. of Johannesburg, used the ESRF to study materials under extreme temperatures and pressures. From those experiences, he urged his government to study the feasibility of constructing a South African synchrotron light source in partnership with neighboring countries. Then in the 1999 timeframe, Bryan Doyle, also now at the U. of Johannesburg, served as a postdoctoral researcher at the ESRF. From those early efforts, the synchrotron-light-source user community started to grow. 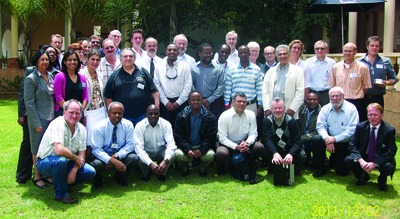 To advocate for themselves, South African light-source users began to establish organizations, with one of the most successful being the Synchrotron Research Roadmap Implementation Committee (SRRIC), chaired by Tshepo Ntsoane of the South African Nuclear Energy Corporation, with Wolf-Dieter Schubert of the U. of the Western Cape as Deputy Chair. In collaboration with the South African Institute of Physics (SAIP), led by SHC as Council President and Brian Masara as Executive Officer, SRRIC convened a synchrotron science workshop during December 1-2, 2011, in Pretoria, which was attended by South African researchers and government policymakers, as well as a number of international partners, including Francesco Sette, Director General of the ESRF; Angus Kirkland of Oxford U., who served as Workshop Facilitator; Herman Winick of Stanford U. and SLAC National Accelerator Laboratory; and one of the authors (SKM). Fig. 3 provides a group photo of the meeting. The goal was to provide input into the development of a document entitled 'Strategic Plan for Synchrotron Science in South Africa', which was chaired by SKM. SRRIC and the SAIP submitted that document to South Africa's Department of Science and Technology and its National Research Foundation, the country's main funding agencies. One of its most important recommendations was for South Africa to enter into a formal financially supporting relationship with the ESRF. Indeed, that recommendation was adopted by the government and on May 21, 2013, South Africa signed a medium-term arrangement with the ESRF at a level of 0.3% of the ESRF budget and, in doing so, became the 20th member country of the ESRF. 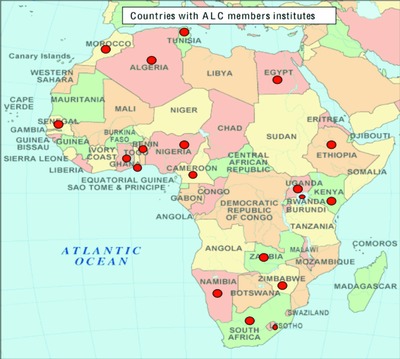 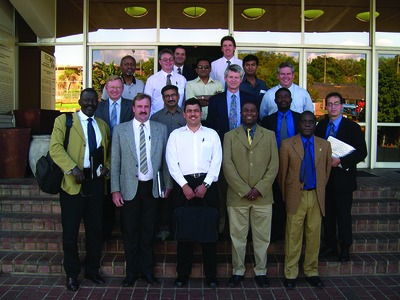 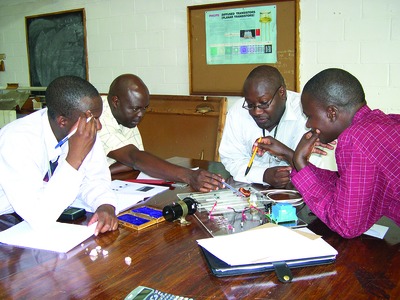 An excellent model already exists for African countries collaborating around a scientific theme. It is the African Laser Centre (ALC), which is a nonprofit organization based in Pretoria and consists of more than 30 member laboratories at universities and various research institutions across the African continent. Fig. 4 shows the countries with ALC member institutions. Launched in 2003, the ALC was the first to call for a pan-African synchrotron light source. From its inception, this has been one of its long-term goals as defined in its 2002 Strategy and Business Plan. Fig. 5 is a group photo of the organizers, with the second from the right on the first row being Philemon Mjwara, the first ALC Board Chair and currently Director General of South Africa's Department of Science and Technology. Through its educational and research programs, the ALC awarded 87 grants during the period 2006-2013, allowing its participants to achieve a number of milestones. During that period, participants contributed 151 articles in refereed journals, 210 publications in conference proceedings, 12 book chapters and 59 student theses. Moreover, between 2003 and 2013, 1249 students were trained in workshops, symposia and various short courses. Fig. 6 shows several participants at a student-training workshop at the U. of Zambia in Lusaka during 2007.

As argued by Herman Winick and SKM in an article published on the lightsources.org website entitled 'A Synchrotron Radiation Research Facility for Africa' (www.lightsources.org/news/2014/09/05/synchrotron-radiation-research-facility-africa), the time is ripe for African governments to make the bold move and invest in a pan-African synchrotron light source in the near future. Highly successful models of such an international facility already exist. For example, the ESRF is a collaboration of 18 European governments, plus South Africa and Israel, and has been in operation since 1992. Even earlier, there was the high-energy physics laboratory, CERN (European Organization for Nuclear Research), in Geneva, Switzerland. Indeed, the CERN model has served well the SESAME (Synchrotron-light for Experimental Science and Applications in the Middle East) light source in the Middle East, which is scheduled to start its research program during 2016 (see 'SESAME moves closer towards completion' in this issue of the IUCr Newsletter). Concluding construction in Allan, Jordan, approximately 30 km from Amman, it is a collaboration of nine Middle Eastern governments, namely Bahrain, Cyprus, Egypt, Iran, Israel, Jordan, Pakistan, Palestinian Authority and Turkey. UNESCO serves as the umbrella organization for both SESAME and CERN. Thus, a proven path is already laid for an African Light Source.

Sekazi K. Mtingwa, an accelerator and high-energy physicist, is a member of the AfLS Steering Committee, a founding Board Member of the ALC, retired from the faculties of MIT and North Carolina A&T State U., and currently is Principal Partner at Triangle Science, Education & Economic Development, LLC, in the Research Triangle of North Carolina, USA.

Simon H. Connell, an accelerator, nuclear, high-energy and condensed matter physicist, is Interim Chair of the AfLS Steering Committee, Chair of the Organizing Committee for the First AfLS Conference and Workshop, former Council President of the South African Institute of Physics, and former Professor of Physics at the U. of Johannesburg.

The IUCr was represented at the First AfLS Conference and Workshop by Michele Zema (IUCr Outreach Officer). Michele Zema and Claude Lecomte (Chair of the IUCr Crystallography in Africa initiative) are both members of the AfLS Steering Committee. Please send any ideas about projects to help implement the AfLS to Michele (mz@iucr.org).