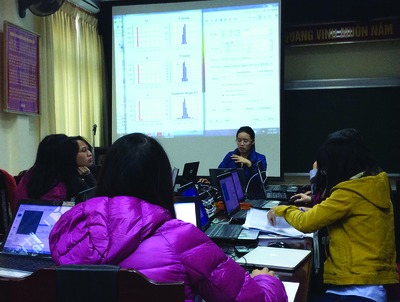 The second edition of the IUCr OpenLab Vietnam 2015 was held at the Faculty of Chemistry, VNU Hanoi U. of Science (VNU-HUS) in conjunction with Hanoi National U. of Education (HNUE) and the IUCr from 7 to 11 December, 2015.

The course was opened on Monday, December 7, with a welcome speech given by Phan Tuan Nghia, Vice-President of the VNU-HUS, followed by a short introduction to the IUCr and its worldwide activities by Luc Van Meervelt. After that, Prof. Van Meervelt initiated the audience in the field of symmetry and X-ray diffraction during an intensive three-day course. Throughout these lectures a number of exercise sessions were supervised by Nguyen Hung Huy (VNU-HUS) and Nguyen Bich Ngan (HNUE) further illustrating the theory of point, plane and space groups, as well as the concept of X-ray diffraction and structure factors.

Participants at the IUCr OpenLab in Hanoi, Vietnam.

During the last two days, a selection of the participants was divided into two smaller groups for a hands-on session, demonstrating crystal selection and mounting, and diffraction data collection. Additionally, a second group was able to perform data reduction, structure solving and refinement on their own with the assistance of Thanh-Ha Nguyen (Bruker AXS Singapore). Moreover, thanks to sponsorship from the Cambridge Crystallographic Data Centre, the participants were introduced to the CSD Enterprise 2016 by tutorials during a hands-on session showing the use of the database during structural research.

Thanks to the financial support from the IUCr, VNU-HUS, HNUE and VLIR-UOS (Belgium), the OpenLab Vietnam 2015 could be organized successfully. The five-day course was intensive and very informative so that all participants were enthusiastic. In total, 82 participants attended the course, including 25 from outside Hanoi coming from universities in many regions in the middle and north of Vietnam. Notably, the variety in background of the participants proves that crystallography will play an important role in their future research. They all greatly appreciated the OpenLab's combination of theory and hands-on sessions, and hope to present their first results during the AsCA2016 meeting in Hanoi (www.asca2016.org/) and the IUCr Congress in Hyderabad, India in 2017 (www.iucr2017.org/).