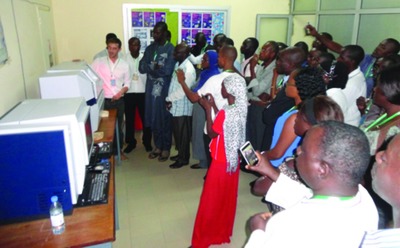 Hands-on lesson with the powder and single-crystal diffractometers.

The travelling laboratory concept was defined by UNESCO and IUCr in 2013 as one of the most important projects of the International Year of Crystallography: it is the conjugation of a conventional crystallography school with real hands-on experiments using single-crystal and powder diffractometers made available on site. In this way the students learn basic crystallography and diffraction to enable them to understand how to solve a structure (single crystal) or how to analyze a complex crystalline powder like clays, which are one of the most studied materials in Africa. To achieve this goal a strong collaboration has been built between IUCr, UNESCO and Bruker. Bruker shipped and lent for free two portable diffractometers to U. Ziguinchor. The teachers of the school were from African and European universities, large facilities and Bruker: L. Le Dréau (Bruker), A. H. Barry (U. Nouakchott, Mauritania), M. Camara (U. Zichinchor), P. Kenfack (U. Dschang, Cameroon), C. Lecomte (U. Lorraine, Vandoeuvre-les-Nancy, France), F. Porcher (LLB,CNRS/CEA, Gif sur Yvette, France) and J. Pradon [Cambridge Crystallographic Data Centre (CCDC), UK]. Drs Pradon and Le Dréau were supported by their own companies, whereas the others were supported by IUCr and AUPELF (Association des Universités Partiellement ou Entièrement de Langue Française). This diversity of the lecturers added value to the school. The diffractometers installed in Dr Camara's laboratory were used extensively during the school and until the end of October. 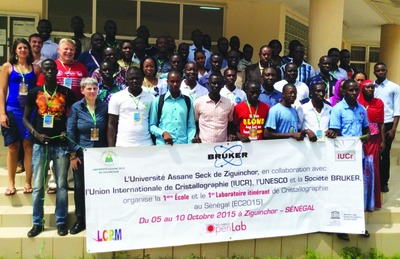 The participants of the Ziguinchor school, the first travelling laboratory in sub-Saharan Africa.

A total of 45 students attended the travelling laboratory; most were from Senegal with the remainder from Benin, Burkina Faso, Cote d'Ivoire and Madagascar. Two thirds of them were Master and PhD students and the others were chemistry, physics and pharmacy professors. The gender balance was excellent with approximately one third of the students and lecturers being female. The foreign students and the accommodation of most of the Senegalese participants were supported by UNESCO, IUCr and U. Ziguinchor. The programme of the school (www.iycr2014.org/openlabs) was divided into two parts: theoretical background (taught at the master level) and hands-on lessons. The difficulty of the school was that some students had had almost no previous crystallographic education (25%), some had some crystallographic knowledge and some were already able to solve structures (10%); all lecturers and tutors were aware of this disparity and dealt with it very well. The students were able to collect X-ray data from their own crystals and powder samples. They performed data reduction, crystal solution and refinement themselves under the tutors' supervision. Seven crystal structures were solved and 15 clays characterized; all resolved structures were unknown and will be submitted to Acta Crystallographica journals by all participating students. This will be published as a highlight of the school. Some of these new structures were analyzed using the Cambridge Structural Database as, thanks to CCDC, the software was freely available to students until the end of the year. 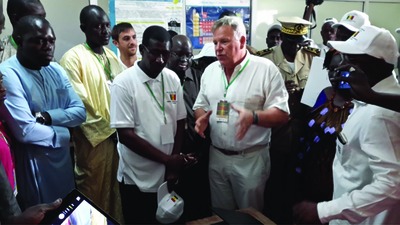 Visit of the Minister for Superior Education and Research to Dr Camara's laboratory.

The location, work conditions and accommodation of the school were perfect thanks to the rector of the University and to the local chair and his students, who made all participants feel at home. The ambiance of the school was extremely friendly with many fruitful discussions not only at the scientific level but also at a professional level, allowing future collaborations in crystallography between Senegalese universities to be built and person-to-person networking in western Africa and Madagascar to be established. Last but not least, Mary Teuw Niane, Minister of Superior Education and Research of Senegal, unexpectedly visited the school and was impressed by its quality (his background is in mathematics). The subsequent discussions between the Minister and school lecturers and students about the role of crystallography in chemistry, physics, geology, life sciences and applied mathematics convinced him about the need for well equipped crystallography laboratories in Senegalese universities.

A questionnaire about the school was completed by all the students and fully confirms the quality of the school and the interest of the students in crystallographic methods: 33 students gave high grades for the quality (average grade 3.9/5); 15 students out of 33 attested that this school fitted very well with their expectations, and for 10 of them it perfectly fitted their expectations. Some students suggested the need to teach a preliminary course on Fourier transform and linear algebra. Also, 60% of the students asked for more documents to be deposited on the website in advance, and all doctorants and most professors asked for an internet book built from all the lectures. It was decided to write this ebook in French and make it freely available to all participants; UNESCO sponsorship would be welcome.