The first edition of the IUCr-UNESCO Rigaku OpenLab Cambodia, organized during the International Year of Crystallography 2014, represented the first opportunity for Cambodian researchers and students to receive some exposure to crystallography. That event was hosted by the Inst. of Technology of Cambodia (ITC), where the first X-ray powder diffractometer (MiniFlex II) in the country had just been installed, thanks to a donation from Rigaku Corp. Participation in that case was limited to some undergraduate and post-graduate students from the Dept. of Geo-resources and Geotechnical Engineering of the ITC and two representatives of the private sector (one from mining and another from the cement industry). However, during the OpenLab, delegates from the Ministry of Industry, Mine and Energy of the Cambodian Government and from the UNESCO Office in Phnom Penh visited the new crystallography laboratory at ITC and appreciated the many opportunities that it could offer in terms of research projects and service to local industries. Following the OpenLab in 2014, the first graduate theses appeared, reporting on the use of X-ray powder diffraction (XRPD), and some collaborations with the cement and mining industries were initiated. 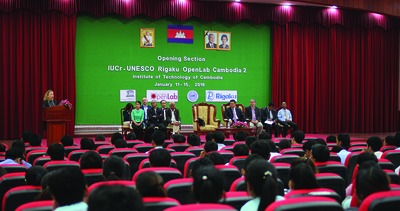 To build on this enthusiasm generated by the first edition, the IUCr and UNESCO, together with ITC and Rigaku Corp., decided to organize a new OpenLab to further disseminate and raise awareness about the importance of crystallography, and emphasize how Cambodian society would benefit from a proper crystallography education at the academic level, especially in the formation of a new class of top managers of both academic and governmental institutions, who would take part in policy-making decisions. The new OpenLab would also make use of the new X-ray fluorescence instrument installed at ITC.

The IUCr-UNESCO Rigaku OpenLab Cambodia 2 was held at ITC on January 11-15, 2016. More than 250 participants attended the Opening Section on January 11, which was hosted by OM Romny, Director General of ITC, and Anne Lemaistre, UNESCO Head of Office and Representative in Cambodia, in the presence of delegates from the Ministry of Education, Youth and Sport; the Ministry of Industry and Handicraft; and the Ministry of Environment of the Cambodian Government. Moreover, lecturers and students from public universities such as the Dept. of Chemical Engineering and Food Technology/ITC, the Dept. of Mechanical Engineering/ITC, the Dept. of Chemistry/Royal U. of Phnom Penh (RUPP), the Dept. of Biology/RUPP, the Dept. of Bioengineering/RUPP and the National Institute of Education attended the session, together with representatives from the private sector, such as Renaissance Minerals Ltd, Kampot Cement and Cambodia Cement Chakrey Ting Factory.

The ceremony was chaired by BUN Kim Ngun, Deputy Head of the Dept. of Geo-resources and Geotechnical Engineering at ITC and Coordinator of the OpenLab Cambodia. Welcome remarks by OM Romny and Anne Lemaistre were followed by speeches by Gautam R. Desiraju (Bringing people and countries together with the message of science), Immediate Past President of the IUCr and Chair of the 24th IUCr Congress and General Assembly (Hyderabad, 2017); Pinak Chakrabarti (Promoting communication and cooperation in the Asia Pacific region: the role of the AsCA), President of AsCA; Ian D. Williams (Establishing scientific collaborations among SE Asian countries), Hong Kong U. of Science and Technology; and Michele Zema (The contribution of the IUCr to the development of scientific education, research and infrastructure), Outreach Officer at the IUCr. Taisuke Yoshiki, representative of Rigaku Corp., showed the strong involvement of Rigaku in promoting education and innovation.

An open discussion on 'How can crystallography education contribute to Cambodian society through science and technology development?' involved all participants in the afternoon of the same day. This was followed by a series of dissemination lectures: Gautam R. Desiraju told 'the story of three crystals' (i.e. salt, sugar and diamond), Pinak Chakrabarti introduced the concepts of molecules and interactions, Ian D. Williams highlighted the complementarity of powder and single-crystal X-ray diffraction techniques, and Serena C. Tarantino, U. of Pavia, Italy, suggested a way of exploiting local resources to produce inorganic polymers as an alternative to cementitious materials for structural applications. 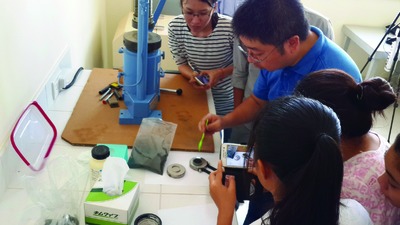 The Practical Section of IUCr-UNESCO Rigaku OpenLab Cambodia 2 was started on January 12. Pinak Chakrabarti opened it with a broad overview of symmetry in crystals and X-ray diffraction methods. Then, Ian D. Williams, Michele Zema and Serena C. Tarantino alternated at the teacher's desk to give a full course on the fundamentals of crystallography, with particular emphasis on diffraction theory and the basics of XRPD. This led on to the XRPD practical session on sample preparation and data acquisition, held by Yue Bing (Rigaku Corp.) on the afternoon of January 14. On January 15, X-ray fluorescence spectrometry was introduced by Hisashi Homma (Rigaku Corp.), with lectures and tutorials on sample preparation (powder and bulk metal), data acquisition and quantitative analysis. Hands-on training was done on geological and metallurgical materials, using powder or pressed pellets as well as bulk metal samples.

At the end of the day, certificates were awarded to all participants at the closing ceremony of the OpenLab Cambodia 2 by BUN Kim Ngun. The participants were very enthusiastic about the OpenLab activity.