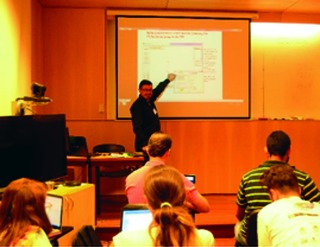 Javier Ellena (Brazil) lecturing on the use of CSD search software. 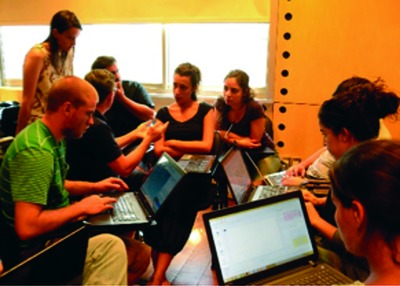 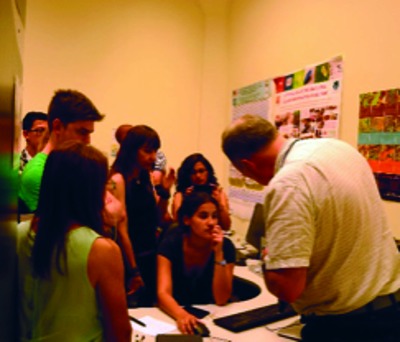 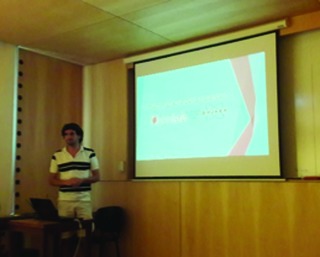 Participant Sebastián Martínez (Uruguay) finishing his presentation on the structure he solved during the OpenLab. 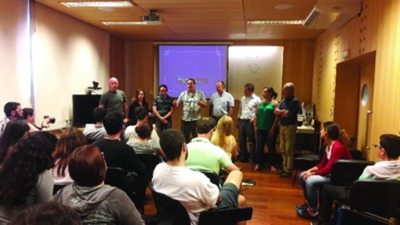 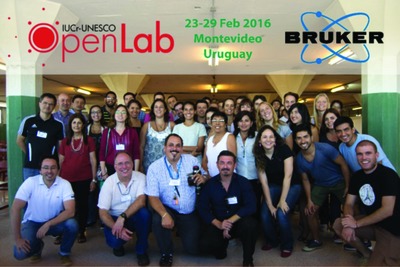 The second edition of the Bruker OpenLab Uruguay, 'Resolución de estructuras cristalinas por difracción de rayos X de monocristal' (http://iycr2014.org/events/openlabs/bruker-openlab-uruguay-2), was held in sunny Montevideo in February 2016, taking advantage of the Bruker D8 Venture diffractometer installed in 2014 at Facultad de Química, U. de la República. The event was organized by Leopoldo Suescun, Mario Macías and Natalia Alvarez from Laboratorio de Cristalografía, Química del Estado Sólido y Materiales (Cryssmat-Lab), Cátedra de Física, DETEMA and DEC Facultad de Química, and was supported by the IUCr (through the IYCr2014 Legacy Fund), Bruker, Comisión Académica de Posgrado (CAP) of U. de la República and Teclab (Bruker's representative in Uruguay). The OpenLab brought together 44 participants (young professors, PhD, MSc and undergraduate students) from Argentina (4), Bolivia (1), Brazil (4), Chile (3), Costa Rica (2), Perú (2) and Uruguay (28) who had the chance to learn the fundamentals of crystallography and their application to single-crystal X-ray diffraction (SC-XRD). All participants had the chance to experience all the processes of SC-XRD, from crystal selection and mounting to CIF preparation, with practice samples and data. They were also provided with temporary licenses to Bruker software and the Cambridge Structural Database (CSD) to complete their structural analysis and learn about databases. Additionally, 17 very excited participants brought single crystals and were able to select and mount them, collect their own data, and perform the structure determination and refinement of the structures with the assistance of Tutors, Lecturers and fellow participants. One structure solved and refined during the OpenLab has already been submitted to the CSD and included in a manuscript accepted by (Victoria de la Sovera , http://dx.doi.org/10.1016/j.tetlet.2016.04.072).

The program included 18 hours of Lectures and 12 hours of Practical sessions on the fundamentals of crystallography, taught in Spanish by the local Lecturers Leopoldo Suescun, Álvaro W. Mombrú and Ricardo Faccio (all from Facultad de Química) and Javier Ellena (Instituto de Física de Sao Carlos, U. de Sao Paulo, Brazil) and in English by Hamilton B. Napolitano (U. Estadual de Goiás, Brazil). Additionally, it included 3 hours of Lectures and 2 of practice on crystallization and single-crystal selection and mounting taught by Iván Brito (U. de Antofagasta, Chile) and 14 hours of Lectures and 10 hours of Practical sessions on application of single-crystal diffractometry taught by Bruce Noll (Bruker AXS, USA). Three hours of the program were also devoted to advanced applications of SC-XRD to characterization of materials taught by Serena Tarantino (U. di Pavia, Italy) and Michele Zema (U. di Pavia, Italy/IUCr). B. Noll and the Tutors Mario Macías and Natalia Alvarez devoted many hours helping the participants select and mount their crystals, performing crystal evaluation and data collection setup and guiding the data processing and structure determination process of organic, metal-organic and mineral samples. The intense program included a welcome reception hosted by Teclab and Juan Carrau Winehouse (maker of Cristalizado, the wine of the IYCr2014).

Sunday morning was devoted to problem solving where all Lecturers and Tutors sat with the students to finalize their refinements and prepare their CIF files. Sunday afternoon was also busy, with more than 20 participants and tutors working on their problems until the evening. The final day of the program was devoted to presentations from 15 of the students who had solved their own problems and an exam taken by 21 participants who will receive academic credit for their participation in the OpenLab. An anonymous evaluation form was submitted for the students to give their opinions on different aspects of the OpenLab. Except for the unanimous feeling that the course was very intense, most comments were positive and some helpful remarks were given that will help organize future schools of this kind in Latin America. A detailed report of the opinions of participants given in the evaluation form can be obtained from http://cryssmat.fq.edu.uy/OpenLab/evaluationbyparticipants2.pdf.