Summer is rapidly approaching and soon many of us in academics in the northern hemisphere will be enjoying a rather more relaxed schedule and the opportunity to see colleagues we often only see once or twice a year when we attend scientific conferences. The focus of this column is going to be a bit different in that I want to comment on some of the behind-the-scenes efforts that take place to support crystallography and crystallographers, which many of us are not even aware are happening.

The Finance Committee (FC) monitors the financial health of the IUCr and makes recommendations to the Executive Committee (EC) of the IUCr for action. The FC met March 21-22 in Leuven. Many good things are happening in our community, but the financial challenges we face are significant. Many improvements have been made to our journals, new editors have stepped up to serve, reviews are happening faster, Open Access use continues to grow, new tools have been developed, the IUCr Journals website has been updated etc., but subscription revenue is down. The reality is that there is not a direct correlation between the number and quality of pages we publish in our IUCr journals and our subscription revenue, which is more dependent on what is happening in the publishing industry and library subscription budgets in general.

In many ways, we are victims of our own success. The IUCr EC made the decision to launch several new initiatives in conjunction with IYCr2014 and fund those activities by spending down some of our reserves. IYCr2014 was a tremendous success by many measures, but in particular in the increase in public awareness and in the areas of education and outreach. The IUCr organized just over a dozen OpenLabs during 2014. These have been very successful and have helped train many future crystallographers all over the world. The programme is so successful that we have organized almost that many again since 2014 (reports from two appear here and here in this issue). The number of scientific meetings with a crystallographic focus is also up. With the addition of LACA we now have four Regional Associates, and great progress continues to be made in Africa. A recent check of the IUCr website lists no fewer than 18 meetings that have been granted IUCr sponsorship in the latest batch considered, making a total of 39 supported meetings in 2016.

Of course, it takes funding to continue to support all these good activities in our community. With subscription revenue down, the FC is reviewing a number of options to recommend to the EC to increase revenue and better our world-wide crystallographic community. Last year the FC recommended that the EC consider the establishment of an IUCr Associates Programme. It was felt that a voluntary IUCr Associates Programme with a modest dues structure would help accomplish the dual goals of promoting a sense of professionalism to better serve our community and supporting worthy activities. Key aspects of the Associates proposal are that it would be voluntary, would help promote our profession, and could provide tangible benefits, all with a modest dues structure. All the National Committees for Crystallography were consulted about the plan to get their feedback and input. The results were overwhelmingly positive, but several valid concerns were raised which were reviewed by the FC in March. The proposal has been modified with the benefits more clearly defined and has been forwarded to the EC for their consideration. 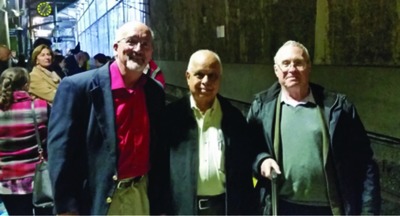 A relieved Marv Hackert, S. N. Rao and Mike Glazer in Lille knowing they had seats on the Eurostar to London.

I would be remiss if I did not mention that this FC meeting turned out to be far more adventurous than one would normally expect for a meeting focused on budgets. On the morning of March 22nd, we learned of the two bombs that killed several people at the nearby Zaventem airport near Brussels and another explosion that killed over 20 people at the Maelbeek metro station. While we all had one eye on work and we did finish IUCr business, the other eye was tracking the news. With the airport closed, all trains around Brussels shut down, and hotel rooms and rental cars rapidly in short supply, many of us were pondering how and when they were going to get home - even wondering if we would have a place to stay that evening. Three of us (S. N. Rao, Mike Glazer and myself) decided to try and get east of Brussels where local trains were still running. From there we would catch a train to Lille and hopefully catch a Eurostar out of Paris en route to London. Taxis and rental cars were in short supply, but our good friend and General Secretary/Treasurer of the IUCr Luc Van Meervelt offered to drive us to Kortrijk to catch a train. That worked, we made it to Lille, and got a seat on the Eurostar to London later that evening. As an example of turning lemons into lemonade, we were seated with a young classics major and for most of the trip to London she was a very receptive audience learning all about crystallography and how it has benefited society.

ICSU (International Council for Science) is another organization of importance to the IUCr. ICSU was founded in 1931 as a non-governmental organization whose mission is to strengthen international science for the benefit of society. ICSU seeks to break the barriers of specialization by promoting and supporting international interdisciplinary programmes of common concern to all scientists. The IUCr is a scientific union and was formally admitted to ICSU in 1947. The principal source of ICSU's finances is the contributions it receives from its members, along with grants and contracts from UN bodies, foundations and agencies. The IUCr was successful in obtaining an ICSU grant for 30K euros to support our initiatives in Africa. ICSU also has triennial meetings, with their next General Assembly taking place in Taipei in October 2017.

The Adhering Bodies of the IUCr are the National Academies or National Crystallographic Societies. This is important because this is how a country's representation within the IUCr is determined and this varies from country to country. In the USA, the US National Committee for Crystallography (USNC/Cr) represents US crystallographers in the IUCr through the National Academy of Sciences with support and oversight by BISO (Board on International Scientific Organizations). Indeed, the USNC/Cr is one of about 18 National Committees supported by BISO, which strives to strengthen US participation in international scientific cooperation. I recently returned from a meeting of BISO where I learned that many of our goals for the IUCr (support for interdisciplinary research, capacity building etc.) and struggles (funding, communication, diversity representation etc.) are shared by many other international unions. I will be sharing some of the ideas I learned with the EC when we next meet face-to-face in Denver in July.

This spring a very successful 'International School on Crystallography for Space Sciences' was held April 17-29 in Puebla, Mexico (see article here). The school was organized by Maria Eugenia Mendoza (Puebla), Juanma Garcia-Ruiz (Granada, Spain), Mariano Mendez (COSPAR), Gueliermo Tenorio (INAOE, Mexico) and Hanna Dabkowska (IUCr EC). The school was co-sponsored by IUCr and COSPAR and attended by about 30 students, mostly from Latin America, but also from North America and Europe. The IUCr EC was also represented by Wulf Depmeier. The group of lecturers was truly international and they taught and discussed items spanning the full range from crystallization, methods of crystal characterization, mineralogy/crystallography of remote places on Earth, such as the Popocatepetl volcano, and real space objects such as Moon, Mars, comets or asteroids. Follow-up events will be organized around the world.

I do hope that many of you will be able to attend one or more of our four Regional Associate Meetings: ACA (Denver, CO, USA, July 22-26); ECA (Basel, Switzerland, August 28 to September 1); LACA (Merida, Mexico, October 23-27); and AsCA (Hanoi, Vietnam, December 4-7). You can find information on IUCr XXIV in Hyderabad in 2017 here, and we will hear a lot more about the plans at the next EC meeting. I have mentioned this frequently, but I cannot emphasize too much how important it is for the future health of our organization that we recognize the need for diverse representation in all phases of the IUCr - that starts with the nomination of delegates, nominations for officers and Commission members to be voted on in Hyderabad.

A reminder that the IUCr is inviting nominations for the Ewald Prize for outstanding contributions to the science of crystallography. The Prize is presented once every three years during the IUCr Congress. Davide Viterbo is the chair of the Selection Committee. Nominations may be submitted electronically until the end of August. The Nomination Form and the names of the Selection Committee can be obtained from http://www.iucr.org/iucr/ewald-prize.

Thank you for your continued support of our collective mission to support and advance crystallography around the world. As always, my heartfelt thanks to the many of you who do so much for the IUCr. Please do not hesitate to contact me or any member of the EC with your concerns, comments or suggestions for how the IUCr can work more effectively to serve you.