Mike joined the IUCr in 1975 as an Editorial Assistant, before moving on to be Technical Editor in 1986 and Executive Secretary in 1993. He has seen the IUCr Chester offices move from Whitefriars to Abbey Square, and then expand further to the current three offices. In the same period, the stable of IUCr Journals has increased from paper copies of Acta Cryst. A and B and J. Appl. Cryst. to the present suite of online publications.

Mike succeeded Jim King, who was the highly regarded first ever Executive Secretary of the IUCr. Not only did Mike provide a steady hand on the IUCr's tiller for the past 24 years, but he also oversaw the modernisation of the organisation in general and the Chester offices in particular. Few industries can have undergone as much turmoil in that period as scientific publishing has experienced, with the transformation from subscription-based printed journals to online-only offerings with increasing levels of open access, but Mike calmly navigated the IUCr safely through.

From the 16th Congress in Beijing through to the 24th Congress in Hyderabad, Mike has worked with nine different IUCr Presidents and four different General Secretaries and Treasurers. Each has benefitted greatly from Mike's stoic support and sound advice. Mike has attended a total of 11 Congresses. He has always been available to help with various issues - his cheerful and friendly personality has been warmly appreciated by those he met. Under his stewardship, the Chester offices have enjoyed a supportive environment where the staff have felt genuinely appreciated, and while we all wish him a long, happy and healthy retirement, he will be greatly missed by the colleagues who have been privileged to work with him.

...and is succeeded by Alex Ashcroft 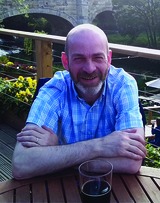 Alex has a Chemistry degree and D.Phil. from Oxford U., where he was based in Tony Cheetham's group in the Chemical Crystallography Laboratory. Alex's D.Phil. was on catalysis, so despite doing powder XRD in Oxford, the Royal Institution and Daresbury, powder neutron diffraction at the Rutherford Laboratory and dabbling in electron microscopy and EXAFS, he doesn't claim to be a crystallographer but says he does know some really good ones. He once made a cup of coffee for Dorothy Hodgkin. One of his D.Phil. examiners was IUCrJ Main Editor Richard Catlow, who complimented him on having the best spell-checked thesis he had ever seen. Those of you who have published in Acta Cryst. A or International Tables can probably guess the origin of this flawless presentation, and will deduce that Alex was an early beneficiary of the excellence typical of the Chester office's editorial staff.

After a year Post Doc at the U. of California Santa Barbara, Alex joined Unilever R&D in Port Sunlight, UK, where he worked for 23 years on a variety of projects, mostly in the oral care, deodorants and household cleaning areas. Alex's duties included leading research projects, developing strategies to grow science areas, setting up PhD studentships with university departments and even cleaning local consumers' bathrooms and kitchens in the name of science.

Alex is well aware that by following Mike, who has been such a stalwart of the IUCr, he has very high standards to live up to, but is really excited about having the opportunity to work for such a highly regarded scientific organisation. Reading about the history of the IUCr, and looking through the minutes from the Montreal Congress in preparation for his interview, Alex says he was hugely impressed by the sense of community, integrity and dedication to high-quality science that the IUCr embodies, and he is relishing the opportunity to support that as Executive Secretary. Alex will be in Hyderabad, wearing his Associate Member lapel pin with pride, so please introduce yourself if you see him. He can be contacted at execsec@iucr.org.

Celebrating 25 years at the IUCr 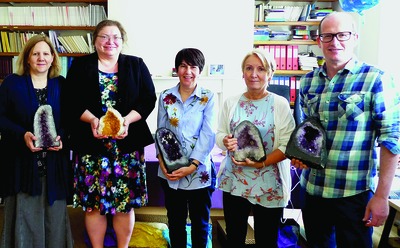