ICQ13 covered a wide range of topics on quasicrystals: formation, growth and phase stability; structure and modeling; mathematics of quasiperiodic and aperiodic structures; transport, mechanical and magnetic properties; and finally, surfaces and overlayer structures. In addition, other aspects of materials science such as metamaterials, polymer science, metallic glasses and metallic alloys were discussed. The conference also reviewed the state-of-the-art of quasicrystal research and its future direction.

ICQ13 was attended by 113 participants (including 15 accompanying persons) from 22 countries, including 26 PhD or master students. There were 13 invited talks (including a public lecture by the 2011 Nobel Laureate in Chemistry, Dan Shechtman), 3 tutorial lectures, 50 contributed talks and 36 poster presentations. The conference was truly interdisciplinary - comprising theoretical and experimental physicists, chemists, materials scientists and mathematicians.

The proceedings of the conference have been published in the open-access Journal of Physics: Conference Series Volume 809 (2017) (http://iopscience.iop.org/issue/1742-6596/809/1). The papers have been reviewed in the regular refereeing process. Among the 35 proceedings received, 30 have been accepted for publication. 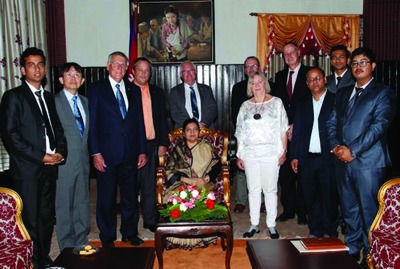 Meeting with the President of Nepal.

The conference itself was held at the Dhulikhel Lodge Resort. The public lecture was organised at the central campus of Trubhuvan U. in Kirtipur, hosted jointly by the Nepal Physical Society and the Central Department of Physics, while the tutorial lectures were held at Kathmandu U. These two events were open to local researchers and students. A special ceremony was organised for the inauguration of ICQ13, which was addressed and attended by the vice-chancellors of Tribhuvan U., Kathmandu U., Nepal Academy of Science and Technology (NAST), and representatives of various professional organisations, including the Nepal Government.

The Jean-Marie Dubois Award for Excellence in Quasicrystals (2016) was presented to Marek Mihalkovič for the theoretical work that has enabled and demonstrated the simulation of thermodynamic and dynamic properties of quasicrystals - based on realistic atomic-scale models and energetics. The Jean-Marie Dubois Award was established to recognize important, sustained research on any aspect of quasicrystals in the last 10-year period preceding the award. The prizes for best student presentation were awarded to Ito Natsu from Toyo U., Japan, for her paper titled 'Synthesis and magnetic properties of the Au-Al-Yb approximant' and Nicolas Macé from U. Paris-Saclay, France, for his paper titled 'Gap structure and topological indices on the Fibonacci quasicrystal'. 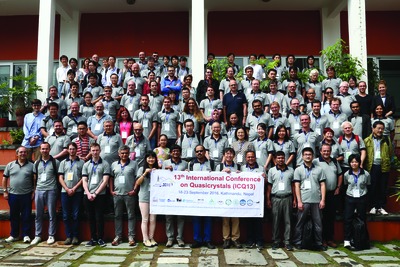 Participants at the 13th International Conference on Quasicrystals (ICQ13) in Kathmandu, Nepal, September 18-23, 2016.

We would like to express our sincere thanks to the members of the Organising Committee, Program Committee and International Advisory Board, invited speakers, session chairs, editorial board members and reviewers of the conference proceedings and all others for their support and involvement in the conference.

Last, but not least, we would like to thank the Local Organisation Committee of ICQ13 - chaired by Narayan Prasad Adhikari - for the efforts that made the conference so successful. We would also like to express our gratitude for the support we received from the U. Liverpool, UK, Tohoku U., Japan, and Tribhuvan U., Nepal.

We hope that the conference helped to promote the struggling tourism sector of Nepal after the country was hit by devastating earthquakes in 2015. We thank the Nepal Tourism Board, Atithi Devo Bhava, Chandragiri Cable Car and Cultural Bands for helping ICQ13 participants explore the culture, history and natural beauty of the Himalayan country Nepal during their stay.