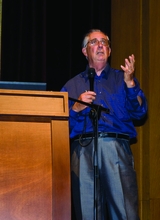 The distribution of oral and poster presentations in the major categories of crystallographic research was as follows: (the first percentage being the oral presentations and the second being the posters). Biological and Macromolecular Crystallography (29%, 21%); Materials and Minerals (23%, 21%); Physical including fundamental crystallography (8%, 5%); Chemical Crystallography (25%, 40%); Experimental and Computational techniques (15%, 13%). These five ECM Focus Areas map onto the thirteen ECA SIGs (see www. ecanews.org/sig_approved.php). Overall there were a total of 235 and 482 oral and poster presentations and the participants came from 51 countries. There was also a Crystallographic Software Fayre organized by Martin Lutz, as well as a Commercial Exhibition comprising 27 exhibitors.There were a total of 71 student bursaries awarded, which were supported financially by the following sponsors: the IUCr, ECA, the Turkish Crystallographic Association (TCA), the Turkish Scientific and Technical Research Council (TUBITAK) and the Organization for the Prohibition of Chemical Weapons (OPCW), comprising a total of $12000 and 12000 Euros.

Added to this program the usual awards for the Perutz Prize and the Bertaut Prize were both made. The details of these have been published in a previous IUCr Newsletter and are also available on the ECA website: www.ecanews.org/ecaprize.php. There are now also a wide variety of ECM Poster Prizes and the recipients and sponsors of these Prizes are summarised at www.ecanews.org/posterprize.php. These latter Prizes were presented at the ECM25 Closing Ceremony.

A Satellite Conference on Mathematical and Theoretical Crystallography, Symmetry and Crystallography in Turkish Art and Culture, organized by Massimo Nespolo, was held immediately before ECM25, also at the Istanbul Military Museum and Congress Centre. 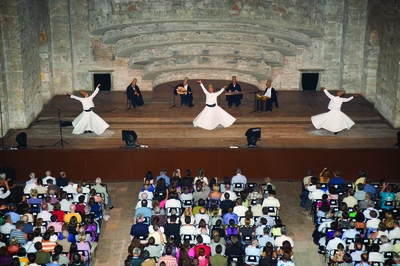 Swirling Dervishes at the Church of St Irene. 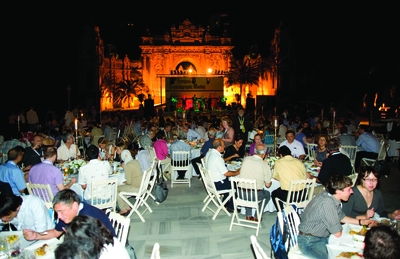 Gala Dinner in the grounds of the Dolmabahce Palace.

The Social Program was able to draw on the rich and diverse culture and buildings of Istanbul. A concert was held at the Church of St Irene and included both orchestra and Swirling Dervishes performances (the latter pictured). The Gala Dinner was held at the Dolmabahce Palace followed by dancing by the diners. The Excursion Day, i.e. the day after the Scientific Conference had concluded, was a Bosphorus Cruise. In addition Turkish Military Orchestra and Turkish Dance performances were given at the Opening Ceremony and the 25th Anniversary evening respectively.

Overall, the 805 Delegates, the 75 Accompanying Persons and the 70 Exhibitor Representatives enjoyed a truly memorable scientific and cultural program. 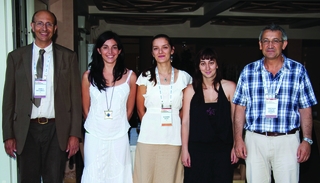 Engin Kendi, John R. Helliwell, Suheyla Ozbey and Semra Ide on behalf of the ECM25 Local Organizing Committee and the Programme Committee as well as the ECA.