Some historical and general outlines 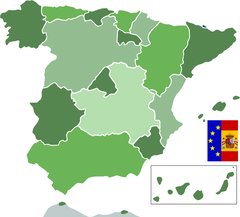 A sample of Lapis specularis.

Spain has been linked to crystals for centuries as the home of important mining ore deposits. The first Spanish contribution to the history of crystals was reported by Pliny the Elder (I Century AD) in his 'Natural History', where he describes the windows and greenhouses of the richer inhabitants of the Roman Empire being covered by crystals of 'Lapis specularis', the Latin name for large transparent crystals of gypsum. This dehydrated form of calcium sulphate was extracted by Romans in Segóbriga (La Mancha) because of its crystal clarity, size (up to one meter) and perfect flatness. 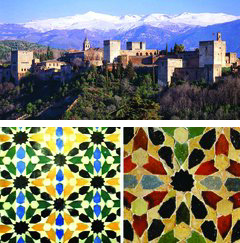 The vast amount of mineralogical information contained in Pliny's 'Natural History' was preserved and enhanced in 'Book XVI on Stones and Metals' which covered the Etymologiarum of Isidor of Seville (560-636). It is also in the Lapidarium of Alfonso X (1221-1284), a fascinating work by a group of Muslim, Hebrew and Christian sages from a time when peaceful multicultural collaboration was demonstrated to be possible. Nevertheless, it was the unparalleled talent of the Arabian geometers in investigating the problem of tessellation of two-dimensional space, which made the most important pre-Renaissance Spanish contribution to crystallography and geometrical art. The decorative symmetry of the tiling in the Alhambra Palace in Granada is today used to teach symmetry all over the world.

Several hundred years later, in the 15th century, we find many examples of interest in bi-dimensional structures and symmetry, as is found on the ceilings of the main rooms of castles, palaces and special buildings such as the U. of Alcala or Segovia's Castle, near Madrid.

The variety of products found in Spanish mines and the enormous richness of American ores motivated the work of excellent metallurgists and mineralogists such as J. de Arfe Villafañe (1535-1603), D. de Santiago, and Á. Alonso Barba (1569-1662), the author of 'Arte de los metales'. He developed the method for recovering silver and gold by using mercury extracted in Almadén (La Mancha), the largest mercury mine in the world. In addition, America and the Far East provided stunning and fascinating mineral samples for collectors and scientists of the New World. The Spanish Royal Cabinet of Natural History was created in 1771 from the collection of minerals of P. Franco Dávila (1711-1786). It was probably the best collection of its time, and was used by R. de L'Isle (1736-1790) during his studies on crystal morphology.

The first Spanish scientific journal, printed in 1799 included articles on the nature of crystals by mineralogists educated in the Wernerian School of Freiburg. The controversy between Werner's ideas on the classification of minerals based on external properties and the new concept introduced by R. de L'Isle and the abate René Just Haüy (1743-1822) on crystal morphology is clearly observed in the 'Anales de Historia Natural'. It demonstrates how aware Spanish scientists were of the crucial changes occurring in mineralogy during the 18th and 19th centuries. 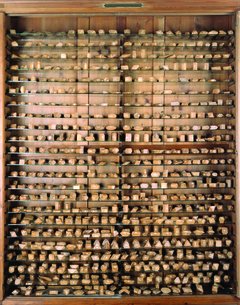 Some crystallographic models of the abate Haüy.

A collection of crystallographic solids given by Haüy to the Galician mathematician J. Rodríguez González (1770-1824) was used by crystallographers G. de Linares (1845-1904) and L. Calderón (1847-1894) who established what was probably the first (1888) Chair of Crystallography in a European University.

Francisco Pardillo (1884-1955) (Photo courtesy of the Royal Acad. of Sciences and Arts of Barcelona). 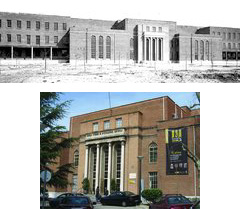 At the beginning of the 20th century, the Spanish crystallographer F. Pardillo immediately recognized the importance of the investigations of Laue and Bragg. In 1923 he reported these studies to the Boletin de la Real Sociedad Española de Historia Natural. Two years later, B. Cabrera (who later became director of the Instituto Nacional de Física y Química) wrote a report on the novel application of X-rays to determine the structure of materials in the 'Anales de la Sociedad Española de Física y Química'.

After the Spanish Civil War, young crystallographers created the foundations of current Spanish crystallography. L. Bru advanced X-ray and electron microscopy first in the Canary Islands, later in Sevilla and finally at the U. of Madrid. L. Rivoir headed the X-ray Dept. at the Instituto de Fisica, Consejo Superior de Investigaciones Científicas (CSIC), the Spanish National Research Council, and J. L. Amorós formed a group of young crystallographers and crystal growers at the U. of Madrid. 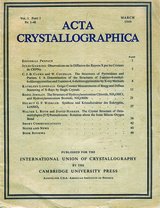 At that time there were two main schools of crystallography in Spain, those of M. Font-Altaba (U. of Barcelona) and S. Martínez-Carrera and S. García-Blanco (CSIC). S. Martínez-Carrera brought experience gained in Pittsburgh with computing programs that replaced the Beevers-Lipson strips. These groups used Weissenberg cameras and the first IBM computers. In the 70s, four-circle single-crystal diffractometers replaced Weissenberg and precession cameras.

The 'Rocasolano' (CSIC) group in Madrid strengthened the crystallographic community in all of Spain by collecting data, and creating and maintaining the first crystallographic software collections in Spain (installed on a UNIVAC mainframe). They also negotiated with the Cambridge Crystallographic Data Centre (CCDC) for distribution of the CSD crystallographic database throughout the country. Thanks to the generosity of the CCDC, this agreement later covered all Latin American countries as well. 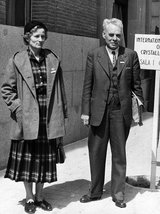 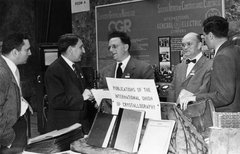 The first Inter-Congress meeting of the IUCr, held in Madrid in 1956. 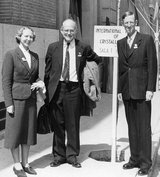 The importance of crystallography for the development of chemistry in Spain led to the growth of several crystallographic groups. In this enterprise a generation of young Spanish crystallographers born around 1940 played an important role, elevating Spanish crystallography to its rightful place on the international stage. Many of them have passed away, including F. H. Cano (CSIC) and X. Solans (U. of Barcelona), others have retired, such as J. Fayos and Francisco Sanz (CSIC) and J. A. Subirana (Polytechnic U. of Barcelona), while others are still active, including Carlos Miravitlles, C. Foces-Foces, E. Iglesias, M. Martínez-Ripoll (CSIC) and J. M. Amigó (U. of Valencia). However, crystallography in Spain, and especially in academic institutions, still seems to be erroneously considered a minor technical skill, whose application and interpretation is trivial. Despite the importance of crystallography for biology and biomedicine, and the rather large number of research groups in Spain in cellular and molecular biology, the lack of resources dedicated to macromolecular crystallography is very apparent. At the end of the eighties Spain became the first associate scientific member of the Institute Laue-Langevin (ILL), the high-flux neutron reactor of Grenoble, and new possibilities were opened for the crystallographic community including physicists, biologists and engineers. Increased activity developed around magnetic crystallography, soft condensed matter, liquids and amorphous systems, and biology. Synchrotron techniques for crystallographic studies brought Spanish crystallographers to the European Synchrotron Radiation Facility (ESRF). 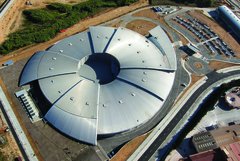 View of the Spanish synchrotron ALBA as in November 2009.

Today the Spanish Group on Crystallography and Crystal Growth (Grupo Especializado de Cristalografía y Crecimiento Cristalino, GE3C) has over 200 members. If other crystallographers associated with neutron, solid state, proteomics and surface applications are taken into account, then about 400 Spanish researchers are currently involved in crystallographic research. Most Spanish crystallographers are organized in teams in the Canary Islands, Andalusia, Valencia, Asturias, Catalonia, Galicia, the Basque Country and Madrid, as well as others. They share over 200 X-ray diffraction machines for both powder and single-crystal applications, and maintain active participation in neutron and synchrotron techniques in different European facilities (the ILL and the ESRF). The Spanish synchrotron ALBA was inaugurated in March 2010 with several crystallographic beam lines. Electron microscopy will also be well represented there, from high-resolution transmission electron microscopy to field emission electron scanning microscopy.

Meeting on Anomalous Scattering, held in Madrid in 1974.

Spanish crystallographers hold a yearly national congress and have also organized several international seminars, workshops, conferences and meetings. At the Executive Committee meeting arranged during the Third General Assembly in Paris in July 1954, it was proposed that the IUCr should organize specialized symposia between the assemblies. The first of these meetings was held in Madrid in 1956 and since then, specialized Inter-Congress meetings have become a regular feature of the Union's activities. In April 1974 an Inter-Congress Conference was held in Madrid on the subject of anomalous scattering, the results of which were assembled into a valuable book dealing with every conceivable aspect of anomalous scattering known at that time.

Thanks to the explicit votes of Mario Nardelli (Italy) and Olga Kennard (UK), as well as to the financial support given by M. Font-Altaba (the Mayor of Barcelona), the 6th European Crystallographic Meeting (ECM-6) was successfully held in Barcelona during the summer of 1980, with Carlos Miravitlles as Chairman.

Now, nearly one hundred years since Laue and Bragg's experiments, we are preparing to host the XXII Congress and General Assembly of the International Union of Crystallography (www.iucr2011madrid.es/) in Madrid. It will be a spectacular and memorable event from both scientific and social perspectives (see later in this issue for more information on the Congress).

Next Issue... 'Crystallographers in Spain'.