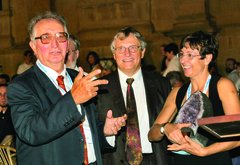 Lodovico with Carlo Mealli and Paola Paoli at the Florence Congress in 2005, where he received an award for Award for Exceptional Service to Crystallography for his organization of the Erice Schools.

Lodovico Riva Di Sanseverino passed away on 18 June 2010 at the age of 70. Lodovico was Professor of Chemistry and Mineralogy at the U. of Bologna and since 1974 had been the organizer of the International School of Crystallography in Erice. He was born in Palermo in 1939 and, after starting his chemistry career at the U. of Palermo, he graduated from the U. of Florence in 1962. After some periods spent in The Netherlands and in England, he pursued his scientific career as full Professor at the U. of Bologna, starting in 1975.

He died unexpectedly in hospital in Sicily a few days after closing the latest course of the Crystallographic Schools in Erice, which, also thanks to the invaluable collaboration with Paola Spadon, was the usual outstanding success. To underline the height reached by this 42nd course entitled 'Structure and Function from Macromolecular Crystallography: Organization in Space and Time' (directed by T. L. Blundell and M. A. Carrondo), as many as three Nobel Laureates had gladly accepted to be teachers.

Lodovico had decided not to return immediately to Bologna after the school, but to stay in Erice, because his support could be helpful to the next course, once again related to crystallography, namely 'Structural and Molecular Archaeology', directed by G. Tsoucaris.

We wish to remember Lodovico with the contented expression of the present photo, which was taken during the banquet of the XX IUCr Congress in Florence in 2005, when the Union presented him with an Award for Exceptional Service to Crystallography for his organization of the Erice Schools.

Lodovico leaves behind his wife Fiorbellina, his son Clemente, his daughter Claudia and two grandchildren.