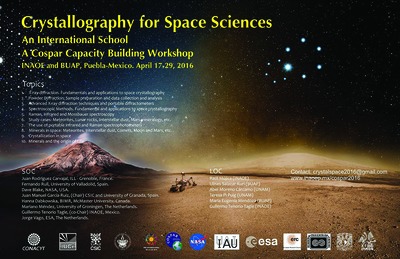 The first International School/Workshop on Crystallography for Space Sciences organized by the Committee on Space Research (COSPAR), the IUCr and the International Astronomical Union was held at INAOE and BUAP in Puebla, Mexico, April 17-29, 2016. The aim of the Workshop, directed by J. García-Ruiz (CSIC-U. of Granada), was to prepare participants for the in-depth study of extraterrestrial minerals, rocks and other interstellar particles, using in situ and remote analytical techniques. 27 PhD students, postdocs and young staff members took part in the workshop. They learned about modern crystallographic techniques in the fields of diffraction, imaging, spectroscopy and remote sensing. Mineral growth patterns in the early Earth, other planets, moons and meteorites, and the relevance of crystals to investigations of the origin of life, were described. The students analyzed their own data as well as data from the Discovery and Curiosity missions. Portable diffractometers and spectrophotometers designed for these missions were used during the field trip for remote analysis of volcanic rocks. The participants learned about the programs of COSPAR (M. Mendez) and the IUCr (H. Dabkowska). 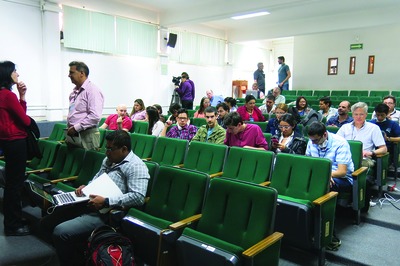 On the opening day the nearby Popocatepetl volcano erupted, providing the students with an ample amount of volcanic ash to be analyzed. The planned excursion to this volcano, led by the vulcanologist Claus Siebe, was moved to the site of lava deposits from previous eruptions.

The crystallographic and crystal growth lectures were presented by J. Britten, J. R. Carvajal, H. Dabkowska, Y. Kimura, J. A. Manrique, C. Mavris, M. E. Mendoza, T. P. Puig, J. M. Garcia-Ruiz and F. Rull. The program featured talks about the Mars missions (D. Blake on Curiosity, J. Vago on Exomars and P. Sobron on future missions), the Hayabusa mission (T. Nakamura), meteorite investigations (R. Navarro-Gonzalez, F. Ortega and J. Urrutia), early minerals (M. van Zuilen) and interesting crystals (W. Depmeier and D. Page). Students worked with the instructors, preparing samples and analyzing them using a portable diffractometer, Raman and infrared spectrophotometer and optical microscopy. The school ended with the presentation of the practical work performed by the students on their own samples or samples provided by the organizers. The detailed program of the workshop can be found at www.inaoep.mx/cospar2016. 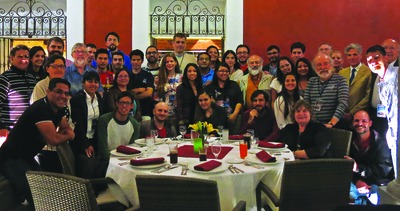 A dinner organized by Maria Eugenia Mendoza and Guillermo Tenorio Tagle for the participants of the COSPAR-IUCr workshop in the famous China Poblana restaurant in Puebla.

The local organizing team lead by G. T. Tagle, M. E. Mendoza, R. Mujica, T. P. Puig and U. Salazar kept the group well fed and entertained, with visits to Puebla City and the ancient pyramids in Cholula and Teotihuacan, a concert performed by the young Esperanza Azteca orchestra, a lecture about the Giant Crystals of Naica (J. Garcia-Ruiz), the Exomars mission (J. Vago), and a round table discussion on 'Possibility of Life on Mars'. The movie 'The Martian' was screened and discussed with the experts involved in Mars exploration. There was also an opportunity to observe the crystal growth competition organized by R. Múica and M. E. Mendoza for Puebla school children.