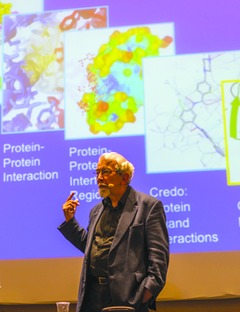 Tom Blundell, Director of the Erice International School of Crystallography, describing advances in his laboratory's programme in drug discovery at the 2014 School on Crystallography in Structure-Based Drug Design. Photo by Jeff Blaney. 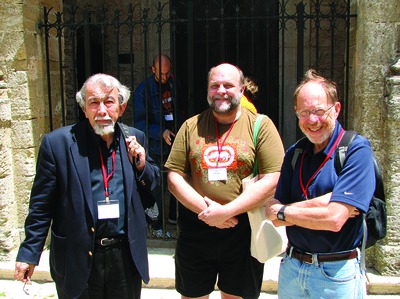 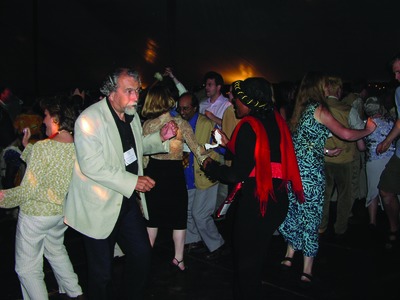 Tom Blundell dances with his wife, Lynn, at the ECA Meeting in 2003 in Durban, South Africa. Photo by Eddy Arnold. 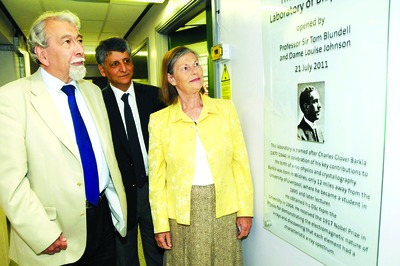 (l-r) Tom Blundell, Samar Hasnain and Louise Johnson at the 2011 Dedication of the Barkla X-ray Laboratory of Biophysics at the University of Liverpool. 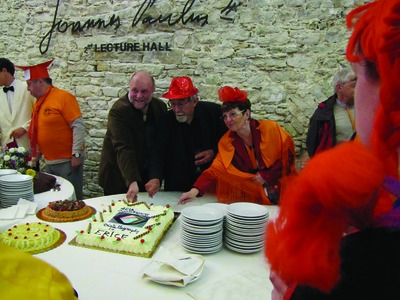 Eddy Arnold, Tom Blundell and Paola Spadon in Erice, Sicily, cutting a cake commemorating the 40th Anniversary of the International School of Crystallography in 2014.

Tom Blundell has been awarded the 2017 Ewald Prize, recognizing his very broad contributions to the field of crystallography. Tom will receive the award at the IUCr triennial congress in Hyderabad on August 21, and will give a lecture following the award presentation. His Ewald lecture is marked by the publication of a feature article entitled 'Protein crystallography and drug discovery: recollections of knowledge exchange between academia and industry' in IUCrJ, 4, 308321 (2017).

Professor Sir Tom Blundell has been one of the worldwide leaders in crystallographic innovation, especially at the interface with life sciences, starting with his work on determining the structure of insulin with Dorothy Hodgkin. Tom has determined an exceptionally broad array of medically critical human-protein structures, has championed methods enabling drug design and discovery through structural optimization, crystallographic fragment screening, and computational modelling, and has been a leader in advanced crystallography education on the international scale.

Tom began his brilliant career in macromolecular crystallography as a postdoctoral associate with the 1964 Nobel Prize winner Dorothy Crowfoot Hodgkin at Oxford U., UK, and was a member of the team that solved the structure of insulin, the first three-dimensional structure of a protein hormone. Tom has established the molecular structures and mechanisms of a remarkable array of medically significant human proteins, including polypeptide hormones (insulin, glucagon, pancreatic polypeptide and oxytocin), growth factors (NGF, FGF, HGF/SF), DNA repair factors (RAD51/BRCA, DNA-PKcs, PAXX), lens crystallins proteins, and aspartic proteases (renins, HIV protease), among many others, often in complex with receptors or small-molecule ligands. His group's highly creative work on building advanced computational tools for structural bioinformatics (such as Composer, Modeller, Fugue, SDM and mCSM) and chemoinformatics (CREDO, CHOPIN) has enabled structure-informed design of small-molecule drugs and engineered macromolecules. He has pioneered the use of crystallography in fragment-based drug discovery, both in academia and through the co-founding of Astex, moving many candidate drugs into clinical trials.

Tom has been heavily involved in education, first teaching in Brasenose and Linacre Colleges in Oxford U. until 1973, before moving to Sussex briefly to work in Biological Sciences and then between 1976 and 1996 as Bernal Professor of Crystallography at Birkbeck, where he developed a major multidisciplinary crystallographic team researching on a range of themes, from materials to macromolecules, with extensive teaching programmes. In 1996 Tom moved to the Sir William Dunn Chair of Biochemistry in Cambridge, where crystallography remains a central experimental theme in understanding complex multicomponent cell regulatory systems. Tom has been the Director of the International School of Crystallography at Erice since 1980 when Dorothy Hodgkin stepped down as the director after a four-year stint. Tom's commitment to crystallographic education is demonstrated by his uninterrupted engagement as the Erice School director for nearly 40 years, contributing to the education of thousands of crystallographers through the yearly courses on advanced topics in crystallography.

Tom has also managed to find time to be an elected Labour Councillor in charge of city planning in Oxford, an advisor to Prime Minister Margaret Thatcher, a Chief Executive of UK research councils, including founding CEO and Chair of the Biotechnology and Biological Sciences Research Council, Chairman for six years of the Royal Commission on the Environment, and President of the UK Science Council. Tom's scientific achievements and services to science have been recognized through many awards and prizes including Fellowship of the Royal Society (1984), FEBS Krebs Medal (1987), the Royal Society's Bernal Medal (1998) and a Knighthood in 1997. His international stature is evidenced by the many high honors he has received. His honorary doctorates from 16 universities include one from the University of Liverpool where he, together with Dame Louise Johnson, opened the Barkla X-ray Laboratory of Biophysics in July 2011. Tom's book co-authored with Louise, Protein Crystallography, remains the best treatment of the subject on many fronts.