The journey of a young African scientist to crystallography 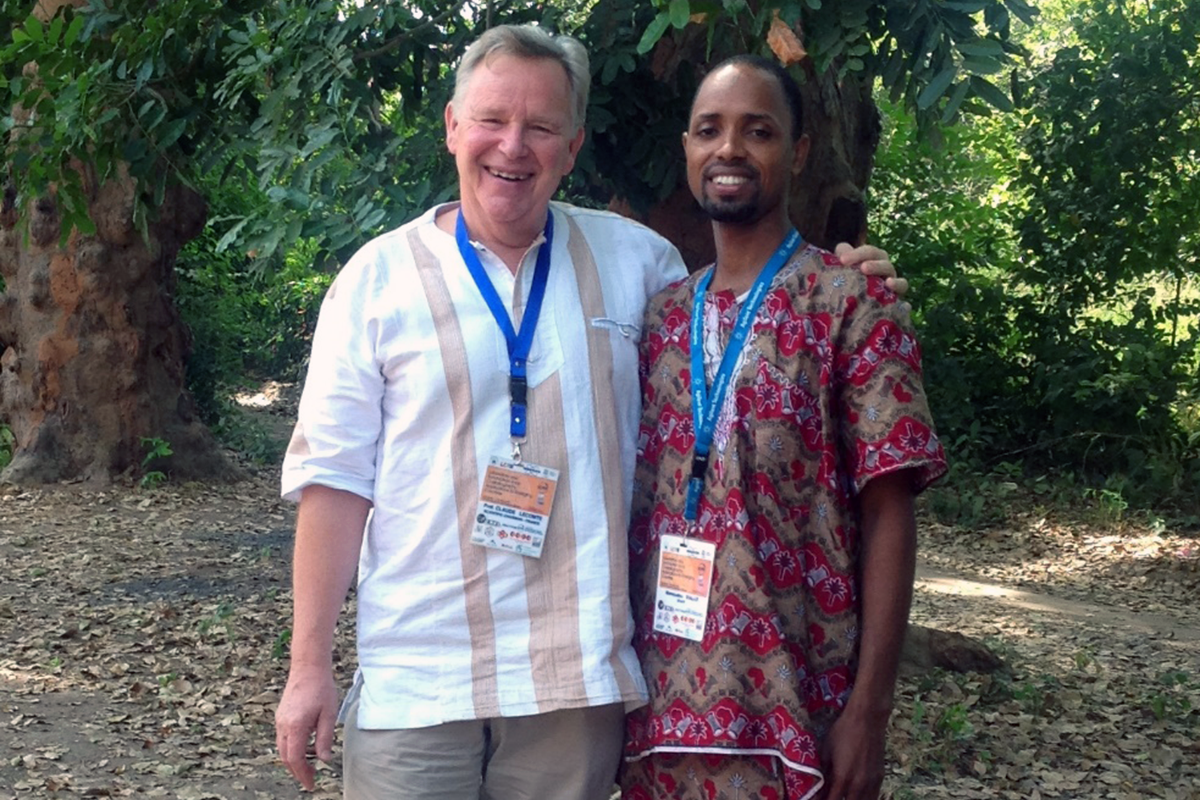 Mamoudou Diallo (right) with his mentor (and Jedi Master), Claude Lecomte, at the IUCr-IUPAP-ICTP OpenLab Senegal in 2017.

I’m by no means an expert in crystallography but I want to tell of my experience for two reasons: first, as an acknowledgment to the IUCr for the Crystallography in Africa initiative. Second, as an inspiration to the new generation of African crystallographers.

In his book Crystal Structure Refinement, A Crystallographer's Guide to SHELXL, Peter Müller wrote "The training of a crystallographer frequently reminds me of that of a Jedi Knight: the practical knowledge only goes from the master’s mouth to the apprentice’s ear and it can be difficult for the outsider or autodidact to become adept without a local guru’s help". During the Bruker/CCDC OpenLab Senegal, 5–10 October 2015 at Assane Seck Ziguinchor University, I was fortunate to meet and become a Padawan (Jedi Apprentice) of a very special Jedi Master whose main interest has been crystallography and its popularization in developing countries, Claude Lecomte, who had just completed his term of office as the Vice-President of the IUCr. I attended the OpenLab as an undergraduate student, looking for (among other things) fields on which to focus my graduate studies. I have found it and found so many tutors and lecturers willing to give me good advice about it. My interest in this fascinating world of crystals and crystallography stems from a lecture Professor Lecomte gave on X-ray crystallography (X-ray interaction with matter) and discussions we used to have at coffee breaks. I was very intrigued by those conversations and inspired by his personality and approach to crystallography. I remember asking him if it would be possible to come to his laboratory at Lorraine University in Nancy, France, for PhD research about this subject of crystallography; he replied saying “Get done with your master’s first”. I finished my master’s one year later and applied for an international joint PhD between my local university (Assane Seck Ziguinchor University) and Lorraine University. This was my chance to become a young African crystallographer. In the beginning I started to read some crystallographic books and tried to grasp the fundamentals of the field but as Peter Müller said, crystallography is not an easy subject to be mastered from a textbook. The major event that shaped my career as a young student of crystallography was the bursary I was awarded to attend the Zürich School of Crystallography “Bring your own crystals”, 11–22 June 2017 at the University of Zürich, Switzerland. This school was crucial for me to gain insights into the fundamentals of X-ray crystallography. With the assistance of Tony Linden, Gervais Chapuis and Hans-Beat Bürgi, to name but a few, I was able to learn the theory and practice of X-ray diffraction and single-crystal small-molecule structure determination. The enthusiasm for learning crystallography shown throughout the Zürich School by me and one of my colleagues (Marielle Agbahoungbata) overwhelmed the organizers so much that they mentioned it in their meeting report in the IUCr Newsletter: “We were very impressed by two young scientists from Africa (Benin & Senegal), who were not only talented and keen to learn, but also eager to take their knowledge home in order to spread the word about crystallography in their region”. This was the same enthusiasm that we also showed at the Joint Meeting of the Pan-African Conference on Crystallography (PCCr2) and The African Light Source (AfLS2), 28 January–2 February 2019 in Accra, Ghana. 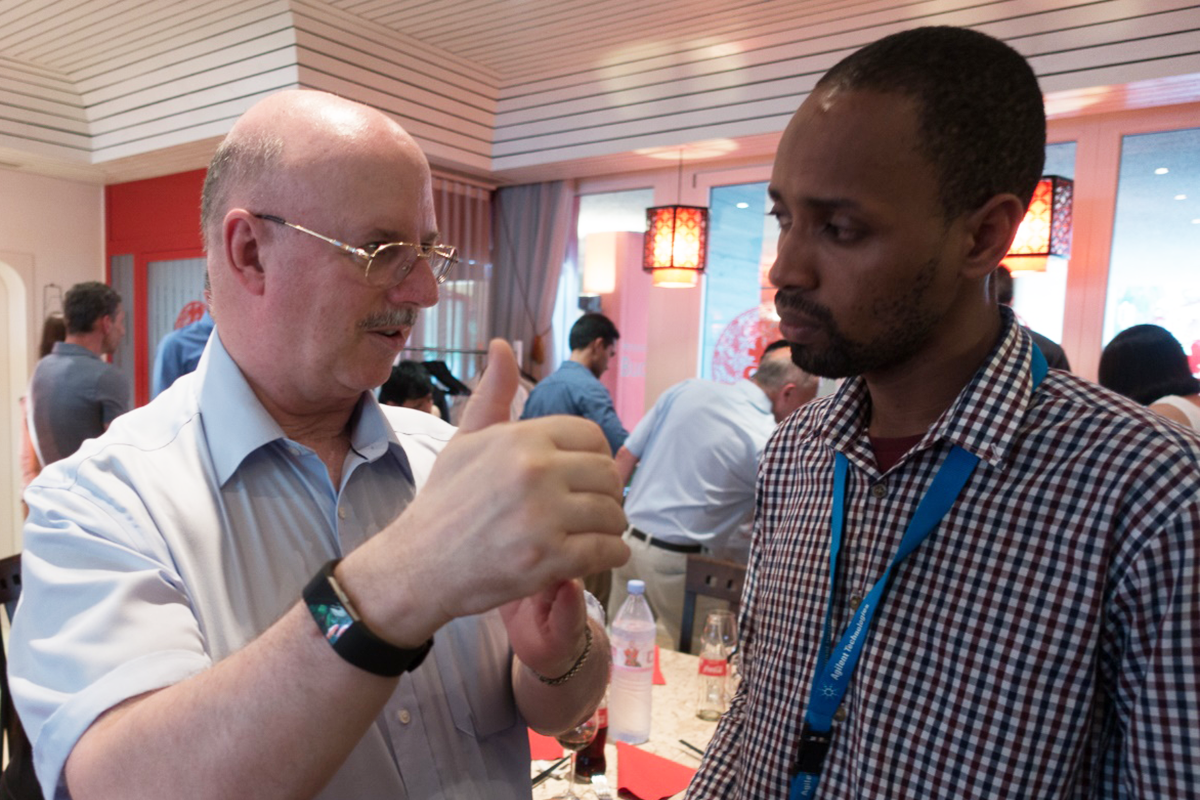 Mamoudou in discussion with Tony Linden at the Zürich School of Crystallography “Bring your own crystals” in 2017.

Another important crystallographic event I took part in was the IUCr-IUPAP-ICTP OpenLab Senegal “Laboratory and synchrotron X-ray crystallography: applications to emerging countries”, 20 November–2 December 2017 in Ziguinchor, Senegal. It was during this OpenLab that I had the opportunity to meet other important figures of crystallography like Alessia Bacchi, former President of the European Crystallographic Association; Michele Zema, IUCr Executive Outreach Officer; and Noureddine Benali Cherif, from the Algerian Academy of Sciences and Technologies and Ecole Nationale Polytechnique, Constantine, Algeria. I was impressed by how approachable these professors were, and how they were always happy to answer questions about relevant topics in crystallography. Another interesting aspect of this second OpenLab in Senegal was the opportunity it gave me to connect with numerous young scientists from all over Africa for potential future collaborations. For a way to stay in touch after the OpenLab, we initiated a WhatsApp group of young African crystallographers. This is today becoming a useful tool for dissemination of information related to crystallography between young African scientists and crystallographers across the continent. Another highlight event in my training career was the fourth Summer School on Mathematical Crystallography, 3–7 June 2019, in Nancy, France. I’m very grateful to Massimo Nespolo who gave us a solid background in geometrical crystallography, which I deem essential for every student who wants to excel at this discipline. This School on Mathematical Crystallography has made a profound impact on me and on my outlook on crystallography and research in general. I think it’s incredibly important for every young African scientist — and in particular women and underrepresented minorities in science — to have the opportunity to be involved in such an educative event. 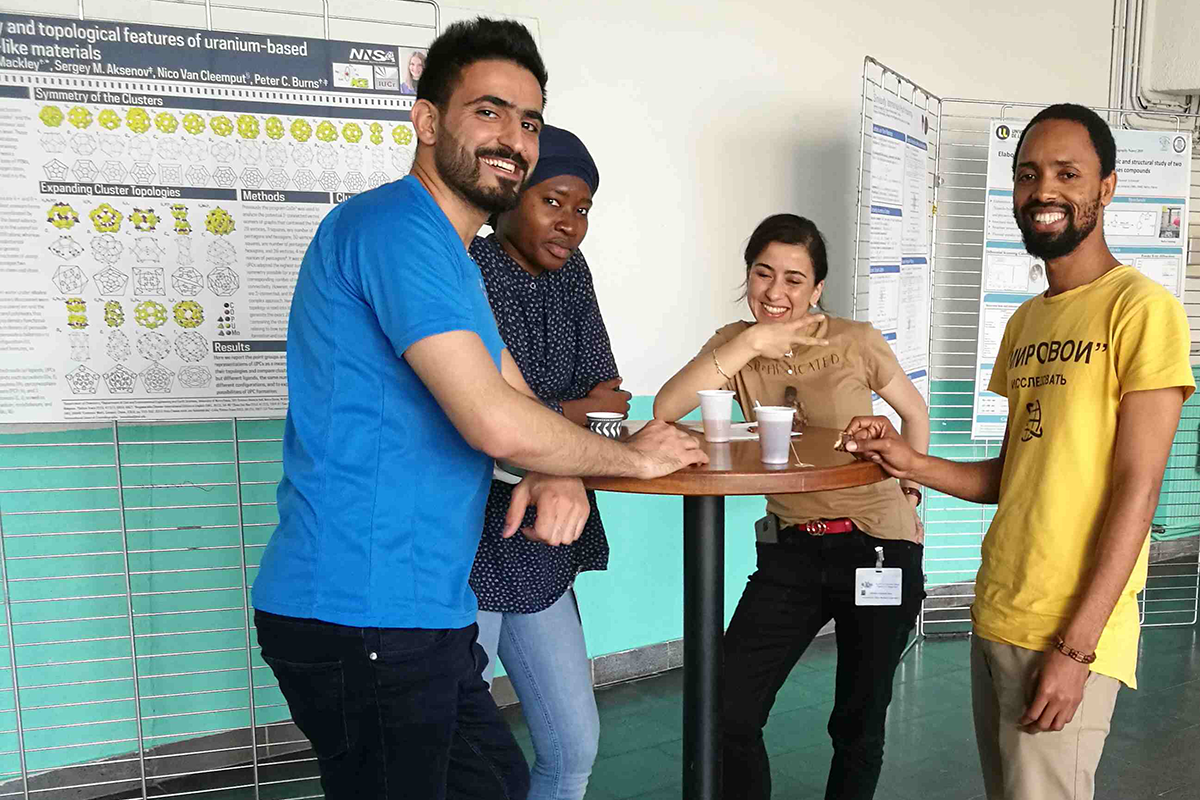 Poster session at the MaThCryst Summer School in Nancy in 2019.

I'm happy that through these IUCr initiatives I had the opportunity to get to know about this fascinating field of crystallography and to share memorable times with renowned crystallographers. The two OpenLabs so far organized in Assane Seck Ziguinchor have allowed access to crystallographic knowledge in Senegal and have also started to open some possibilities for research in chemical crystallography. Two theses related to crystallography have been defended in the Chemistry Department and there are four doctoral theses being prepared in collaboration with the CRM2 (Cristallographie, Résonance Magnétique et Modélisation) Laboratory at Lorraine University. Participating in OpenLabs and crystallographic schools is a unique chance to be surrounded by the best and well-known crystallographers and an excellent opportunity for getting inspired.

Nevertheless, despite IUCr's numerous outreach efforts, many challenges remain so far to be addressed, particularly in developing regions. Building capacities in these countries may be provided by extending further public awareness about the subject of crystallography, such as by providing more crystallographic schools, OpenLabs, workshops and lecture series. In addition to this, including fundamental crystallographic courses in the academic curricular of developing countries would be another very effective way of providing educational opportunities that may impact students in their different fields of scientific study. Support also can be provided to some African young scientists by awarding bursaries to attend European crystallographic schools like the Zürich Schools of Crystallography, the MaThCryst Summer Schools in Nancy, France, or the AIC International Crystallography Schools in Italy. Facilities are also needed in Senegal as up to now, crystallographic experiments are not carried out on-site but abroad. This prevents access to instrumentation and does not enable us to perform hands-on experiments. In addition, international collaborations and strategic partnerships with representatives of local and regional scientific communities should be increased. This will lead to the implementation of national crystallographic associations in developing countries and facilitate the creation of the African Crystallographic Association (AfCA). As Dr Zema said during of one his lectures at the IUCr-IUPAP-ICTP OpenLab Senegal, quoting an African proverb, “If you want to go fast, go alone. If you want to go far, go together”. Now that the process of forming an African Crystallographic Association is imminent, let us all unite in a common effort to ensure that all the countries of the continent that are committed to science have a crystallographic association. Mamoudou in discussion with Michele Zema at the IUCr-IUPAP-ICTP OpenLab Senegal in 2017.

Mamoudou Diallo is in the final year of a PhD in the Chemistry Department (Laboratoire Chimie et Physique des Matériaux, Groupe Matériaux Inorganiques GMI) of Assane Seck Ziguinchor University, Senegal. This is a joint PhD between Assane Seck Ziguinchor University and Lorraine University. He is working on the design and synthesis of lanthanide–transition metal molecular materials, under the supervision of Magatte Camara in Senegal and Mohamed Souhassou in France.