Studies of enzyme systems rewarded with the Aminoff Prize 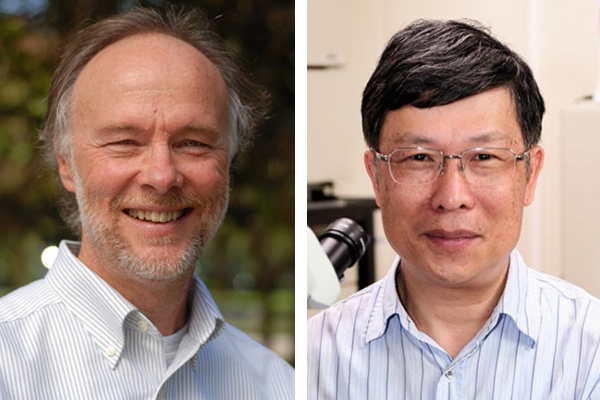 The Royal Swedish Academy of Sciences has awarded the Gregori Aminoff Prize in Crystallography to Douglas Rees (California Institute of Technology, Pasadena, CA, USA) and Jian-Ren Shen (Okayama University, Japan) for “their fundamental contributions to the understanding of biological redox metal clusters”. The award ceremony and commemorating lecture will take place at the Academy’s annual meeting held in Stockholm on 30–31 March 2020.

Jian-Ren Shen has studied a photosynthesis enzyme in plants and photosynthetic bacteria, called photosystem II, while Douglas Rees has studied nitrogenases, which fix atmospheric nitrogen and are found in some bacteria. However, studying these two enzyme systems is challenging. Both systems transfer electrons between different molecules using metalloclusters to temporarily store the electrons. In photosystem II this is a cluster of manganese ions and in nitrogenase it is usually iron. The X-ray radiation used in the study of these systems’ structures tends to change the oxidation state of the metal ions, which means the image produced is not always the same as the way enzymes look in their natural state. Nitrogenase has another difficulty, as the entire system is oxygen-sensitive and must be protected at every stage of the purification and crystallisation process.

For photosystem II, one way of removing the problem is to use short pulses of high-intensity X-ray radiation. This allows enough information about the structure to be collected during one pulse. No redox processes can take place in the short duration of the pulse, and the information from the experiment thus describes the undamaged system.

Jian-Ren Shen and Douglas Rees lead research groups that have succeeded in studying numerous different states in enzymes, which has led to an understanding of how nature drives photosynthesis and fixes atmospheric nitrogen using enzymatic processes.

The Gregory Aminoff Prize rewards a documented individual contribution to the field of crystallography, and has been awarded to Swedish and foreign researchers since 1979. The prize amount is SEK 120,000. More information is available here.