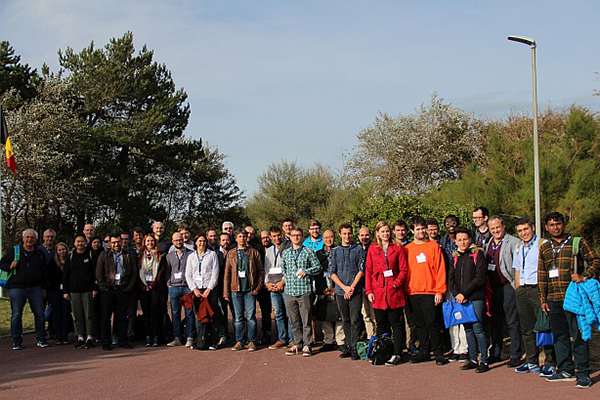 The fourth edition of the International School on Aperiodic Crystals (ISAC4) took place from 8 to 14 September 2019 in Portbail in Normandy, France. Organized under the aegis of the Commission of Aperiodic Crystals (CAC) of the IUCr, it has been labeled a “thematic school” by the Institute of Physics of the CNRS and “Euroschool” by the CmetaC network; it also received decisive support from the Normandy Region. Various other support, including from the IUCr and the French Crystallographic Association, made it possible to set up a scholarship system and to reduce the burden of enrolments in the overall budget of the school.

ISAC4 was organized within the VVF (Villages Vacances Familles) of Portbail to allow accommodation at the school. This unity of place was desired in order to encourage exchanges between participants and teachers. A total of 32 students (from France, Germany, Denmark, Sweden, UK, Italy, Slovenia, Croatia, Poland, Argentina, USA, Costa Rica and Japan) followed the theoretical lessons and tutorials given by nine international experts (from France, Israel, Germany, Czech Republic and Japan) in the field of aperiodic materials.

The school programme was constructed so as to gradually introduce the different concepts inherent in the field of aperiodic materials; tutorials allowing students to apply the concepts discussed were offered throughout the week. Thus, after a detailed introduction to aperiodic crystals (modulated structures, immeasurable composites, quasicrystals) placed in the context of classical crystalline compounds, the very particular case of quasicrystals was discussed by an approach using Landau theory. The formalism of the superspaces developed for the treatment of aperiodic phases was presented; this formalism makes it possible, via the introduction of additional dimensions, to recover the three-dimensional periodicity absent in aperiodic compounds: physical space is then called "external space" or "parallel space" and the additional dimensions "internal space" or "perpendicular space". All of these notions were the subject of a tutorial during which the students were able to understand by geometric constructions the formalism of superspaces and the almost crystalline state by trying to achieve a Penrose tiling from ad hoc geometric pieces. All the concepts necessary for the structural determination of aperiodic crystals were then addressed: symmetry in superspace, indexing of diffraction diagrams with a tutorial that allowed students to work on real diffraction data from monocrystals, and structural resolution theories for modulated phases and quasicrystals. At this stage the students were guided in the resolution of aperiodic structures during an afternoon. As the structural determination in superspace leads only to a model with (3 + n) abstruse dimensions, the tools enabling comprehension of the final structural result for all novices were proposed. The dynamic aspects of the different types of aperiodic crystals were then described and a mode of excitation characteristic of the aperiodic order was defined: the phason. Finally, after a more theoretical description of the electronic properties of aperiodic surfaces and of the symmetry of quasicrystals, the aperiodic magnetic order was presented; a tutorial allowed the students to tackle the problem of solving an immeasurable magnetic structure.

These various lessons were "embellished" by various events such as a poster session allowing students to present their research work, an afternoon excursion with a guide to visit the harbor of Portbail and discover this Norman ecosystem, a gala dinner and a discovery of regional products. These social events aim to develop relationships between participants and create a bond in the community. A WhatsApp discussion queue "ISAC4" was also created by the students.