A Michelson interferometer for X-rays capable of high-order measurement 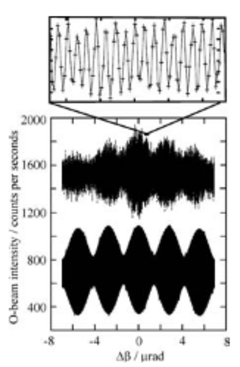 The first Michelson interferometer for hard X-rays [A. Appel and U. Bonse (1991). Phys. Rev. Lett. 64, 1673–1676] featured geometric path-length differences of interfering beams of about 120 nm corresponding to 750 orders at wavelength λ ≈ 0.15 nm. Using the same design principle, i.e. mixing of Laue- and Bragg-case beams diffracted by only one set of Bragg planes of two separate structures of perfect silicon crystals, the scan range could be extended by a factor of 3.6 by modifying the beam-path geometry. 2700 interference orders of the copper Kα1–Kα2 doublet, corresponding to six beat nodes of the doublet, were recorded in Fourier spectrometric mode as shown in the diagram. Based on the know-how gained in this study, an extension to 40000 orders, equivalent to a spectroscopic resolution λ/Δλ ≈ 20000, appears feasible.