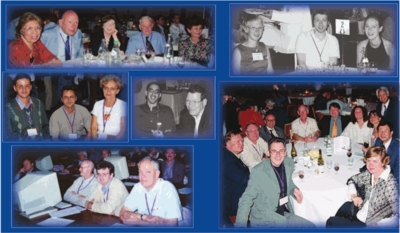 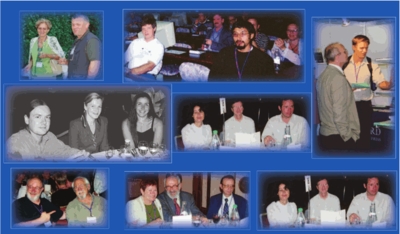 Extremes of Pressure and Temperature

This High-Pressure Commission microsymposium highlighted structural studies of materials subjected to a broad range of thermodynamic conditions up to megabar pressures and thousands of degrees. T. S. Duffy (Princeton U., USA) presented an overview of recently developed radial X-ray diffraction studies of deep Earth materials using diamond-anvil cells. These studies demonstrate for the first time that detailed information about elasticity and strength of abundant lower mantle materials can be obtained directly from measurements at the pressures of the deep Earth. S. Ono (Japan Marine Science & Technology Center) discussed high P-T X-ray diffraction studies of phase transitions of on the complex mineral assemblages peridotite and basalt. C. S. Yoo (Livermore Nat'l Lab, USA) focused on the extraordinary pressure-induced transformations of simple molecular systems such as CO2 at high pressure, including the formation of novel framework and ionic solids. J. H. Eggert (Livermore Natâl Lab, USA) presented new results on the transformations of water under pressure that included both X-ray measurements of structural changes and laser shock studies of pre-compressed samples that access very high temperature states at higher pressures. G. Galli (Livemore Nat. Lab, USA) offered an overview of state-of-the-art first-principles simulations of fluids at high pressures and temperatures. Complementing the experimental talks, she presented new calculations for H2, H2O, and other systems and highlighted the role of theory in uncovering new phenomena in these 'simple' systems under extreme conditions.

This session highlighted the role of signaling domains and their complexes with lipids, peptides, and proteins. The multifunctionality of signaling domains involved in cell-adhesion was illustrated by two talks. T. Hakoshima (Nara Inst. of Science and Technology, Japan) described an impressive series of structures of the FERM domain of radixin in complex with each of its partners, including an analogue of the PIP2 phosphoinositide, peptides derived from the Na+/H+ ion exchanger regulatory protein (NHERP) and from the adhesion protein ICAM-2, and the GDI regulator of the small G protein Rho. All partners bind to independent sites with little or no overlap, providing insights into the role of this domain in coordinating signal transduction at the plasma membrane to cytoskeleton reorganization. In contrast, structures of the FAT domain, a domain that recruits Focal Adhesion Kinase (FAK) to sites of integrin signaling, which was presented by S. Arold (Centre de Biochimie Structurale, France), revealed that tyrosine phosphorylation of this domain, which triggers downstream signaling through recruitment of the SH2 domain of GRB2, is not compatible with the binding of the LD motif of paxillin, suggesting that the latter interactions must be disrupted for the signaling cascade to proceed. Moreover, phosphorylation appears to require structural rearrangements whose nature is suggested by the flexibility of the unbound FAT domain in different crystal structures. The presentation by K. Scheffzek (EMBL, Germany) provided still another picture of multifunctionality with the structure of full-length HPr kinase/phosphorylase. This enzyme regulates carbon metabolism in Gram-positive bacteria by catalyzing both the phosphorylation and dephosphorylation of HPr, a protein of the phosphotransferase system. Both activities take place at the same active site but they use different mechanisms. Observation of phosphates bound at the catalytic site and the comparison with other kinases provides hints at the catalytic mechanisms. F. Dyda (NIH, USA) described a spectacular structure of a 14-3-3 protein complexed with the full-length phosphorylated enzyme AANAT, and showed that not only does the 14-3-3 domain target the enzyme, but it instigates allosteric changes in it as well. Finally, in an interesting departure from her abstract, H. Wu (Cornell Medical School, USA) spoke about the structure of the apoptosis inhibitor p35 in complex with human caspase-8. The caspase is inhibited in the active site via a covalent thioester linkage to p35, which undergoes a dramatic conformational change upon cleavage. The repositioning of the N-terminus of p35 into the active site of the caspase blocks the catalytic dyad and protects the thioester intermediate.

J. Schlessinger (Yale School of Medicine, USA) presented a lecture on the mechanism of activation of growth factor receptors, an area to which he has been one of the world's leading contributors in biochemistry, cell biology, and structural biology. His focus was on the mechanism of dimerization of one such receptor, the fibroblast growth factor (FGF) receptor. The interplay between the polyanionic sulfonated sugar heparin, FGF, and the FGF receptor was beautifully illustrated in a series of structures solved in different conformations and oligomeric states. The presentation was made with much flair and kept the audience awake throughout, but the most entertaining moment came with a video clip showing a duel between two sumo wrestlers as a metaphor for the engagement of two FGF receptor monomers. The crystallographic aspects of the study were done in collaboration with Hubbard and Mohammadi (both at NYU, USA), who were generously acknowledged. The final part of the talk gave a vignette of some of the biological aspects of growth factor receptor signaling, with a focus on a new adaptor protein in FGF receptor signaling, FRS2.

Recently, the combination of diamond anvil cell, ultra-short wavelength X-rays from undulators and large imaging plates has allowed the extension of the field of high-pressure macromolecular crystallography both for accessible pressure range (beyond 2 kbar) and data quality. R. Kahn (IBS, France) presented measurements on hen egg-white lysozyme crystals at pressures up to 7 kbar and on cowpea mosaic virus (CPMV) which is the first example of a crystallized macromolecular assembly studied at high pressure. The possibility of obtaining accurate structural information under high pressure opens a wealth of possibilities such as exploration of sub-states, study of interactions between molecules and between subunits, and detection of the onset of pressure-induced denaturation. Furthermore, high pressure might become a standard tool to improve order in macromolecular crystals, either by favoring more ordered packing or by restricting amplitudes of atomic motions in regions which are disordered at atmospheric pressure. W. Doster (TU Munich, Germany) described dynamic neutron scattering experiments recording structural motions across the unfolding transition of myoglobin in solution. Using isotopic exchange this technique allows one to discriminate between structural fluctuations and those of the hydration shell upon pressure-induced unfolding. The effect of pressure and water penetration on the kinetics of ligand binding were discussed. J. Seddon (Imperial College, UK) described X-ray studies on the effects of pressure on lyotropic liquid crystals made of lipids. These are some of the most pressure sensitive condensed matter systems known and exhibit large changes in phase structure with changes of only a few hundred atmospheres of pressure. Seddon et al. found that pressure can induce the appearance of inverse bicontinuous cubic phases, which do not occur at atmospheric pressure. In addition, a pressure-jump apparatus with synchrotron diffraction was used to study the time course of transitions involving inverse cubic phases, with a view to unravelling the underlying transition mechanisms, e.g. between different bicontinuous cubic phases, and between cubic and inverse hexagonal or lamellar phases. The kinetics is found to depend on the difference between the final pressure and the pressure at the phase transition boundary. Evidence for intermediate structures occurring during the transitions was observed in several cases.

The OCM clearly demonstrated that pressure work on biomolecular and other soft condensed matter systems can yield a wealth of enlightening new information on their structure, energetics, phase behaviour and on their transition kinetics, and might promise fulfillment of the challenge set forth by W. Kauzmann when discussing thermodynamics of unfolding of proteins: 'Until more searching is done in the darkness of high-pressure studies, our understanding of the hydrophobic effect must be considered incomplete'.