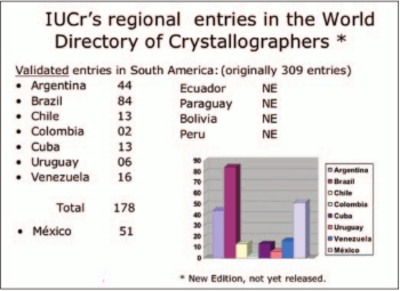 Several countries have been very active in the development of crystallography in South America since as early as the 1940s. Ernesto Galloni, who can be considered one of the pioneers of crystallography in Argentina, and in Latin America, used to describe his first attempts at performing X-ray experiments at the Cancer Inst. in Buenos Aires using completely inadequate X-ray generators.

In 1959 UNESCO financed a Latin American course on Pure and Applied Crystallography in Santiago, Chile, chaired by the Spanish crystallographer Julio Garrido. On this occasion, the idea of forming a group that would unite all the crystallographers of Ibero American origin was conceived.

The first meeting of the Grupo Iberoamericano de Cristalografia took place in 1960 in the city of Córdoba, Argentina. Their charter was signed by crystallographers from Argentina, Chile and Spain (M. Abeledo, M.R. Benyacar, S. Caticha Ellis, E. Galloni, D. Garaycoechea, A. Joel and O. Wittke).

The second meeting of the Grupo Iberoamericano de Cristalografia took place ten years later in Buenos Aires, July 8-16, 1970. It was organized by J. Garrido, L. Brú, M. Font Altaba, J.R. Martínez, all from Spain, and E. Galloni, M. Abeledo, A. Bonfiglioli, C.R. Cortelezzi and M. Iñiguez from Argentina. At this meeting, there were contributions from Argentina, Brazil, Chile, Uruguay, Venezuela and Spain. 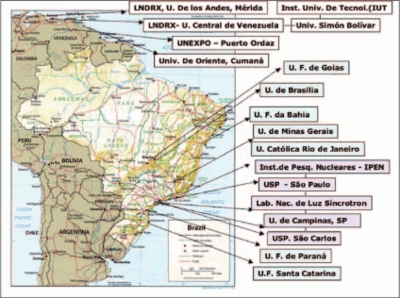 In 1975 a meeting of the Ibero-American Group in Campinas, São Paulo, Brazil attracted more than 200 participants from most of the South American countries, Spain and Portugal. Successive meetings were organized in Buenos Aires, Chile, Portugal and Mexico. In 1990 the Ibero-American Group met in Mérida, Venezuela. At this meeting and at subsequent meetings in Madrid, Spain (1992) and Montevideo, Uruguay (1994) a satellite school on crystallography was organized, sponsored by the IUCr. Unfortunately, the hardships of modern economies in the countries involved presented great difficulties to the organizers of these meetings, and the contacts and links that sustained the organization were broken.

A survey based on the present information available from the groups in South America shows that crystallography is still an important part of scientific research in several countries. We note that several countries are not represented in the World Directory of Crystallography, including Ecuador, Peru, Bolivia and Paraguay. However, there are some university X-ray diffraction labs in those countries, mainly dedicated to materials science research using crystallographic methods.

Over the years, the World Directory of Crystallographers has become a very important tool for identifying researchers involved in all areas of crystallography in all countries. At present, its electronic format makes registration quite easy. But when we look at the list, we are somewhat disappointed. The number of Latin American crystallographers registered is smaller than expected (309 entries). Reasons for this are probably the lack of adequate internet facilities in the Latin American countries and reluctance of people to identify themselves as crystallographers! 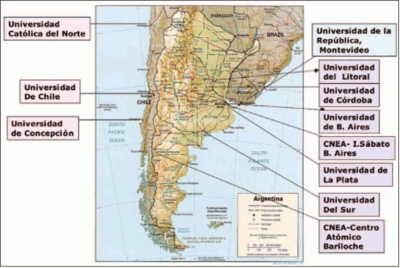 This is not a complete listing of the groups in each country, since information keeps coming, and it will take time to identify all existing groups. From the Central American countries we would like to mention Cuba, whose crystallographers have been registered in the WDC and have participated in the IUCr congresses for more than twenty years. At the moment they are a small group, but still interact significantly with México, Brazil, Colombia and Venezuela. Other Central American countries, such as Puerto Rico, Costa Rica and Panamá, although active in research, have not interacted with other Latin American crystallographers to the best of our knowledge.

For Crystallography in Brazil, a very important landmark was a School on Direct Methods organized by Y. Mascarenhas in São Carlos in 1974. The presence of several distinguished crystallographers, P.P. Ewald, J. Karle, H. Hauptman and M. Woolfson, attracted a number of participants from other Latin American countries. The school was the starting point for the formation of the Brazilian Crystallographic Assn (SBCr), affiliation to the IUCr, and nomination of a National Committee. X-ray diffraction as a tool for structural research had already been started in several institutions, but the creation of the Crystallographic Society was instrumental in organizing meetings and establishing connections among the different groups in the country.

Nowadays, there are approximately 12 well established groups in Brazil, working in different areas of crystallography, in universities and research institutions. The labs are described in the accompanying article.

The Nat'l Synchrotron Light Lab in Campinas, Brazil, since its inauguration in 1997, has been making great efforts to make its facilities available to Latin American researchers. A summer school program was created several years ago and has been very successful, attracting undergraduate students from Central and South America. The scholarships offered cover all expenses for two months. Latin American conferences are organized quite frequently, covering the most recent and important scientific subjects. The Nat'l Synchrotron Light Lab also organizes a users meetings every year, and this event is frequently a good occasion to bring together researchers from several Latin American countries.

In other countries, like Venezuela and Colombia, several crystallography groups were formed at approximately the same time in the 1980s. In Venezuela, a crystallographic society was formally registered in 1992, but it is not currently active. There is an effort going on to revitalize the Society. Some researchers take advantage of the Nat'l Conventions of the Venezuelan Assn for the Advancement of Science (ASOVAC) to gather for discussions. The labs or groups working in crystallography and X-ray diffraction are the following: three main satellites of the Lab Nacional de Difracción de Rayos X (LNDR-X) are located at the Universidad de los Andes, Mérida, the Inst. Venezolano de Investigaciones Científicas (IVIC), Caracas and UNEXPO, Puerto Ordaz. In addition, other groups have been active for many years at the Universidad Central de Venezuela, the Universidad Simón Bolívar, the Centro de Biofísica y Bioquímica (IVIC) and the Inst. de Tecnologia (IUT) in Caracas. There is another group at the Universidad de Oriente, Cumaná. In all, a total of nine main groups and 10 associated groups (using the instrumentation in the main labs) were reported in Venezuela.

Throughout the 90s, several schools and meetings were organized in Venezuela, covering several aspects of crystallography. Some of them had the sponsorship of the IUCr and the ACA. Very dynamic and motivated, the groups mentioned above are the main representation of Venezuelan crystallography. They have no National Committee and affiliation to the IUCr is maintained thanks to the efforts of several groups.

From Oscar Wittke, Santiago de Chile, we learn that crystallography was started in Chile in 1952, when the Crystallography Lab of the Facultad de Ciencias Físicas y Matemáticas of the University of Chile was installed, and it has been functioning for over 50 years. Today, Chile maintains its affiliation to the IUCr, started in 1954. There is a National Committee of Crystallography, but a Crystallographic Society has never has been established. The groups that are more active at the present time are located in three Universitites in Santiago, Antofagasta and Concepción. This last group is involved in biophysical applications, and small angle diffraction. One of the labs in Santiago and one in Antofagasta are more dedicated to materials science and engineering.

Uruguayan scientists dedicated to crystallography have participated in the activities of neighboring countries since the early 70s, as part of the Ibero American group. There is no record of their affiliation to the IUCr or of the existence of a crystallographic society. Within this small country they have created several groups related to the only public university in Uruguay (Universidad de la República), in the Schools of Chemistry, Engineering and Science. According to recent reports, current crystallographic interests are crystal growth, applications in solid state physics and structural chemistry using single crystal instrumentation, a powder diffractometer, and a crystal growth lab.

According to the Secretary of Relations of the Mexican Society of Crystallography (SMCr), A.R. Arellano. The SMCr was founded in 1995 and a Nat'l Committee has been appointed. The SMCr has more than 500 members involved in crystallographic research in several areas, most of them from chemistry and physics, but geology and biology are also represented. Society meetings take place every three years, and schools and courses are organized in different cities every year. These events, designated as 'Crystallography Week' are intended to promote the nationwide teaching of Crystallography. Mexico is affiliated to the IUCr. Several mexican groups have visited Brazil during the past three years, with the purpose of performing experiments at the Brazilian Synchrotron Light Source and also participating of Inter-American events. This very desirable interaction is much needed, a fact well understood by the several institutions that have established exchange programs, like the Centro Latino Americano de Física (CLAF), Nat'l Science Foundation (NSFIGERT) and the American Physical Soc. (APS).

As stated before, many details may have been overlooked in this report. It should be considered the first installment of a future review, which will be written when more information reaches us to complete the picture of the crystallographic community in Latin America.

Thanks are due to the following Latin American crystallographers for some of the information contained in this report: Daniel Vega and Graciela Punte (Argentina), Yvonne Mascarenhas (Brazil), Oscar Wittke (Chile), Graciela Delgado (Venezuela), Laura Fornaro (Uruguay), Alicia R. Arellano (México). Comments and new information on the subject can be sent to torriani@ifi.unicamp.br and will be greatly appreciated.