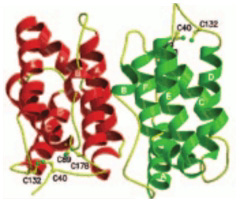 A survey of the Brazilian groups dedicated to crystallography showed a variety of interests, dealing with material science and biological research. X-ray diffraction is the main experimental tool and consequently X-ray laboratories are equipped with conventional sources and the instrumentation necessary for the different techniques and applications. These groups, are mainly associated with universities and research institutes. Brazil also has a synchrotron light source at the Nat'l Synchrotron Light Source (LNLS), the only such facility below the equator, and a neutron reactor at the Nat'l Inst. for Nuclear Research (IPEN). A brief description of the main crystallography groups in the country is given below.

This is the largest experimental facility for the use and development of X-ray techniques not only in Brazil but in all of Latin America. It provides access to researchers from any country, and especially from all of South America. Several beamlines operate in the soft and hard X-ray wavelength region, and beamtime is allocated by peer review of projects submitted by the users.

A new protein crystallography beamline will be installed shortly. This will be a wiggler beamline for MAD experiments. A second small angle scattering beamline SAXS2 and a new EXAFS beamline are under construction.

At present the LNLS staff is formed by a group of approximately 20 researchers in different areas, which include, apart from the SR facilities, a high resolution NMR Lab and the Structural Molecular Biology Lab, which are also national facilities associated to the LNLS, installed in the same campus, offering infrastructure to external users.

The Applied X-ray Crystallographty Lab of the Physics Inst., Unicamp started its activities in 1974. It is equipped with several conventional X-ray sources, and the main research interests are:

The group has three researchers and four PhD students and maintains a close interaction with the Synchrotron Lab.

The USP-São Paulo Crystallography group was established in the early 70s. At present it is involved in the following lines of research: materials science and interdisciplinary topics especially related to structural problems, like the study of semiconductor crystals, films and surfaces, epitaxial growth, liquid crystals, gels and complex fluids. The main techniques used are single crystal diffraction, powder diffraction and small angle scattering. Special attention is given to research in materials used in opto-electronic devices and in complex systems with supramolecular order.

The group has 5 researchers and several graduate students.

The goal of the Institute is to develop scientific research and provide services using the Nuclear Reactor IEA-R1 as a source of neutrons and gamma radiation, generating scientific and technological knowledge, contributing to human resources development and to the improvement of the quality of life of the brazilian population.

A major program to upgrade the diffractometer installed at the beam-hole N°6 of the reactor was undertaken from 1999-2000. The project, in collaboration with the Missouri university research reactor (MURR) includes 9 position sensitive detectors (PSD), a rotating-oscillating collimator and an elastically bent silicon single crystal monochromator. The PSD stack will allow simultaneous measurement of neutron intensity in an angular interval of 30° and the monochromator will permit the choice of three different neutron wavelengths. The combination of monochromator and PSD will lead to a considerable improvement in the spectral resolution and its data collection efficiency over the existing configuration.

Two Groups in the city of São Carlos are very active in several areas of Crystallography. They belong to the Physics Inst. and the Chemistry Institute of the São Carlos campus of the U. of São Paulo.

Six researchers are in charge of the different subjects, and a number of graduate students complete this important group.

The laboratories of the Geosciences Institute include X-ray flourescence and diffraction routinely used for the characterization of rock minerals and soils. Powder diffraction techniques are used to investigate new structures.

The main research activities of the Crystallography Lab of the Physics Inst. of the UFG were established a few years ago, and include: Physicochemical characterization of natural crystals, Crystal Growth (photo-refractive oxides and organic crystals with non-linear optical properties). Structure of organic and inorganic small molecules. The group consists of five researchers and several students.

The Crystallography group at the UFMG is involved in the following research activities:

The U. of Brasilia is strategically located in the center of Brazil, in the country's capital. The Inst. of Geological Sciences was founded in 1965 with the aim of producing professional geologists so much needed in a country with enormous mineral resources. The Crystallography Lab in the IG has been active in the characterization of mineral samples using x-ray diffraction. The staff is composed of several researchers and graduate students.

For more than 20 years, the Crystallography Group of the UFBa has been working in diffraction physics, study of the structure of epitaxial layers, and single crystals using self consistent theory and dynamical theory. Other subjects of interest are: multiple diffraction and X-ray topographic methods. Current projects are mainly theoretical.

The research group at the Materials Science and Metalurgy Dept of the PUC-Rio is engaged in the study of phase transitions in metallic alloys using temperature dependent XRD. The group is working in collaboration with researchers at Hasylab, Hamburg, and is involved in new imaging techniques in real time powder diffraction experiments.

This Lab has been of great importance in the development of instrumentation for the Brazilian Synchrotron Radiation Facility. Several researchers and graduate students are engaged in the following areas:

Other Labs in which X-ray diffraction facilities exist as research infrastructure of Applied Physics and Material Science Depts are located at the following institutions:

The participants of the last LNLS Annual Meeting

More information is being gathered to make this survey more comprehensive. Please send comments and additional information to torriani@ifi.unicamp.br.