A 'missing' member of the inverse crown ether family 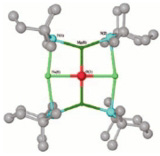 Inverse crown ethers are so called as they reverse the normal roles found in crown ethers, with a positively charged s-block metal based ring capturing O, C or H based anions at its core. These materials are of great interest to synthetic chemists as they selectively (and often multiply) deprotonate a range of organic substrates including the aromatic rings of metallocenes and arenes. In the absence of appropriate substrates, inverse crown ethers act as efficient oxygen scavengers. In this paper it is shown that a previously unknown Na/Mg example with an oxide core can be synthesized by blocking the alternative aromatic metallation route via the use of sterically hindered 1,3,5-mesitylene as solvent.