XVI Meeting of the SBCr 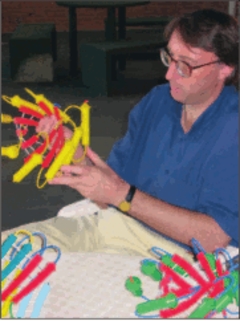 More than 100 members of the Sociedade Brasileira de Cristalografia (SBCr) gathered in March 2003, at the Physics Inst. of the São Carlos campus of the U. of São Paulo. This was the 16th Meeting since the Society was founded in 1972. Organized every two years, this meeting offers the opportunity for all Brazilian crystallography groups to get together and present their latest achievements. It is also a great opportunity for students, who get a chance to explore the different aspects of crystallography that are active research areas in Brazil.

The meeting was preceded by a two-day workshop on 'Data collection and data treatment strategies using area detectors'. The workshop program organizer and main lecturer, Z. Dauter (Brookhaven), discussed 'Data collection strategies', 'International tables made clear' and 'Index, integration and scaling of data'. His enthusiasm was such that he was also involved in the hands-on sessions in the afternoon, with the collaboration of I. Polikarpov, E. Castellano, J. Ellena and J.R. Sabino, from the IF-SC/USP. A group of twelve students attended this workshop.

The opening lecture on 'Ion gating and selectivity in Gramicidin A' was delivered by W. Duax, IUCr President. This was the first time a high ranking official of the IUCr attended a meeting of a crystallographic society in Latin America.

The general subject of structural biology and 'Drug Design in Tropical Deseases' was presented by G. Oliva (U. de São Paulo).

Z. Dauter gave details of the importance of data accuracy in the case of single wavelength anomalous phasing.

Invited lectures on biomolecular crystallography included results on the crystal structure and catalytic mechanism of cellobiohydrolase CelS, the major enzymatic component of the clostridium thermocellum cellulosome, by B. Gomes Guimarães (Nac'l de Luz Síncrotron) and a new experimental charge density study of Cu(II)-L-alanyl-L-valine by Synchrotron Radiation at 17K by J.R. Sabino (IFSC-USP). M.C. Nonato, (U. of São Paulo) presented a new projet on the rational design of DHODH inhibitors and its applications on the treatment of Chagas desease. J. Lima da Silva, (CNRMN / UFRJ) presented a very interesting and instructive lecture on 'Dynamics and Structure of Macromolecules Involved in Human Diseases'.

On the subject of aperiodic crystals, N. Spezialli, (UFMG) presented results on phase transitions and modulated phases in AA'BX4 Compounds. On subjects more related to materials science, K. Damouche (UNESP) showed the potential use of small angle X-ray scattering in the study of hybrid materials with technologial application and F. Rizzo, (Catholic U.), talked about the use of a novel X-ray imaging technique in the study of phase transformations.

Other interesting highlights among the rest of the presentations were:

The viability study for the installation of a SANS Beamline at the reactor of the Inst. Nac'l de Pesquisas Energéticas e Nucleares in São Paulo (IPEN-SP)

Two presentations were selected for a more detailed description (see below).

The crystal structure and catalytic mechanism of cellobiohydrolase CelS, the major enzymatic component of the Clostridium thermocellum cellulosome 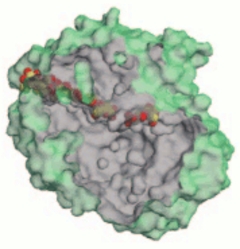 Cellobiohydrolase CelS plays an important role in the cellulosome, an active cellulase system produced by the thermophilic anaerobe Clostridium thermocellum. The structures of the catalytic domain of CelS in complex with substrate (cellohexaose) and product (cellobiose) were determined at 2.5 and 2.4 Å, respectively. The protein folds into an (α/α)6 barrel with a tunnel-shaped substrate-binding region. The conformation of the loops defining the tunnel is intrinsically stable in the absence of substrate, suggesting a model to account for the processive mode of action of family 48 cellobiohydrolases. Structural comparisons with other (α/α)6 barrel glycosidases indicate that CelS and endoglucanase CelA, a sequence-unrelated family 8 glycosidase with a groove shaped substrate-binding region, use the same catalytic machinery to hydrolyze the glycosidic linkage. The nearly identical arrangement of substrate and functionally important residues in the two active sites strongly suggests an evolutionary relationship between the cellobiohydrolase and endoglucanase families. 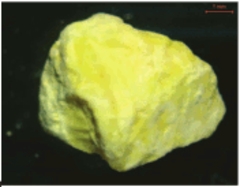 Weeksite is a tectosilicate characterized by a Si:U ratio of 5:2, with chemical formula Th0.5(UO2)2Si5O13_3H2O. This mineral is found with a number of compositional variations. Th-rich weeksite group specimens from Minas Gerais, Brazil, not yet described in the literature, were studied by X-ray powder diffraction. The possible structural sites occupied by Th were investigated on the basis of WDS chemical analysis and Fourier difference maps.