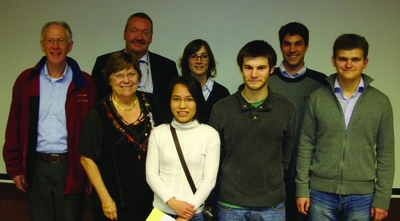 More than 100 scientists took part in the Sixth Belgian Crystallography Symposium BCS-6, held October 13, 2010, at the Academy House, adjacent to the Royal Palace in Brussels, under the aegis of the Belgian National Committee for Crystallography. Due to the success of previous BCS meetings, the National Committee for Crystallography organizes this symposium at biennial intervals to promote contacts between Belgian scientists using diffraction and microscopy techniques for studies in the fields of condensed matter chemistry and physics, material sciences, earth sciences and life sciences. As one of the main objectives was to promote personal contacts, plenary lectures were limited to three, given by distinguished colleagues in widely different fields. During the opening lecture by IUCr president, Sine Larsen, an overview of the activities and aims of the IUCr was given and directly related to the importance of large facilities for the advancement of the field of crystallography. Fullerenes and nanotubes are the favorite study materials of Paul Thiry (Namur), especially the helical 'Belgian' nanotubes discovered in Namur. The morning session was closed by Martin Caffrey (Dublin) with a talk on the promising approach of using lipidic mesophases in crystallizing membrane proteins. A poster session and commercial exhibition was organized during lunchtime. For the afternoon session, three oral presentations were selected from the submitted abstracts (Mathieu Rocaboy, Liège; Dmitry Batuk, Antwerp; and Marta Saraiva, Ghent). Poster prizes were awarded to Maxime Baijot (Liège) and Ngan Bich Nguyen (Leuven). On the occasion of its tenth anniversary, Wim Bras (Grenoble) highlighted the importance of the Dutch-Belgian beamline DUBBLE in Grenoble, currently resulting in more than 550 publications. The meeting was sponsored by the Royal Academies of Sciences and Art of Belgium, and by Bruker AXS, Oxford Diffraction, EFG Berlin, FEI Europe and JEOL.