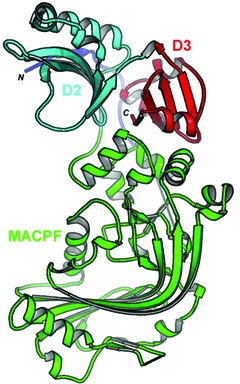 MACPF proteins are important in human immunity and in virulence of pathogens due to their ability to compromise membrane integrity by forming transmembrane pores. The structure of an MACPF-domain-containing protein BT_3439, a potential toxin from a gut symbiont, contains an MACPF domain and two novel C-terminal domains (D2, D3) that have not been observed in previous MACPF structures. The MACPF proteins from Bacteroidetes were likely acquired independently from a eukaryotic origin via horizontal gene transfer to adapt better to the host environment.