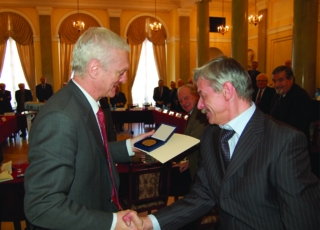 On March 9, 2010, Michal Kleiber, President of the Polish Academy of Sciences, decorated Zbigniew Dauter with the Nicolaus Copernicus Medal, the highest distinction awarded by the Polish Academy of Sciences. The ceremony took place in the Staszic Palace in Warsaw. The award recognizes Dr. Dauter's contribution to the development of protein crystallographic methodology, in particular in the areas of phasing methods and macromolecular structure at ultimate resolution. His name is already permanently associated with the technique of quick halide soaks ('dauterization' of protein crystals), with the exploitation of weak anomalous signal (for example, of phosphorus in nucleic acid structures) and with the use of (jolly!) SAD phasing. He is an expert experimenter, widely known for his skills in getting the best possible diffraction data from macromolecular crystals. A graduate of the Gdansk U. of Technology, he obtained his PhD degree for crystallographic work on small-molecule drugs done with Zofia Kosturkiewicz (Poznan). His postdoctoral posts included work with Michael Woolfson (U. of York). Later Zbigniew (Zbyszek to friends) Dauter spent a number of years at several synchrotron centers (EMBL c/o DESY, Hamburg; NSLS, Brookhaven; APS, Argonne) conducting structural biological research and helping external users of macromolecular crystallography beamlines. The stations that he has supervised are among the most successful beamlines in protein crystallography. He has had a stunning number of collaborations, mostly because of his expertise in synchrotron data collection and structure determination. Currently, he is a principal investigator in the Macromolecular Crystallography Laboratory of the National Cancer Institute at Frederick, and facilitator for the NIH users of the SER-CAT beamline operating at the APS synchrotron in Argonne. The honor bestowed on Dr. Dauter will be felt in the wide circles of our crystallographic family. Congratulations, Zbyszek!