Preparation and promotion of the 25th IUCr Congress in Prague, Czech Republic 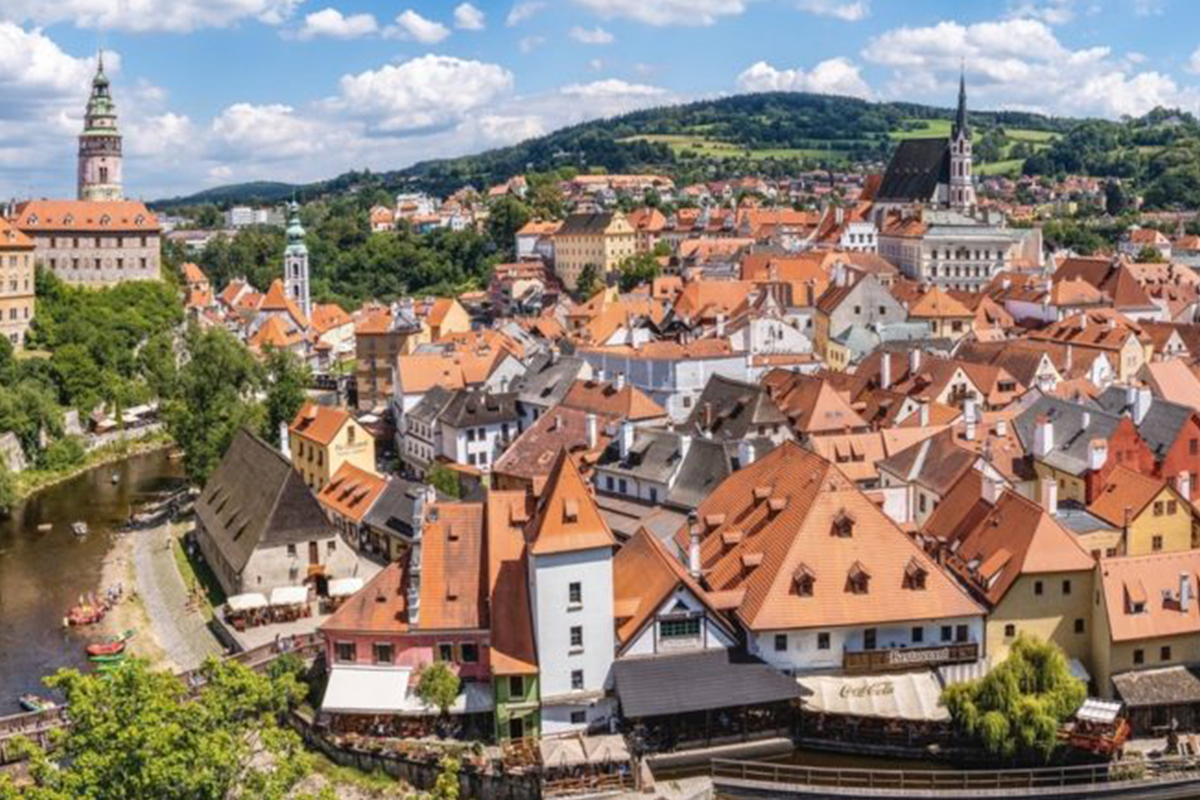 Český Krumlov in South Bohemia, site of one of the post-Congress trips.

Once the list of all plenary and keynote speakers had been accepted by the IUCr Executive Committee in June 2019, we started to send invitation emails from programme@iucr2020.org. In many cases more attempts were necessary and sometimes different addresses had to be used because of spam filters, which can block such general conference addresses. After two and half months of communications, all plenary and keynote lectures now have been confirmed. With respect to the original proposals from the May 2019 International Programme Committee meeting we have made only one change and applied one alternative for the same topics. We are proud to announce a plenary talk by the 2016 Nobel Prize in Chemistry winner Sir Francis Stoddart on "How crystallography helped to create a new bond in chemistry". We also look forward to plenary lectures from Helen Berman on "How data have revealed the structural universe" and David Eisenberg on "The structural biology of pathogenic amyloid fibrils".

A total of 36 keynote lectures will be presented, 3 in parallel in 12 blocks at the beginning and end of each conference day. The keynote speakers with their photos can be seen here. One of the keynote lectures is devoted to the winners of the Gjønnes Medal in Electron Crystallography, Sven Hovmöller and Ute Kolb.

Currently, we have 137 confirmed co-chairs out of a total number of 208 persons for 104 regular sessions.

Satellites and workshops are under discussion. In collaboration with some IUCr Commissions and others we are planning the following: 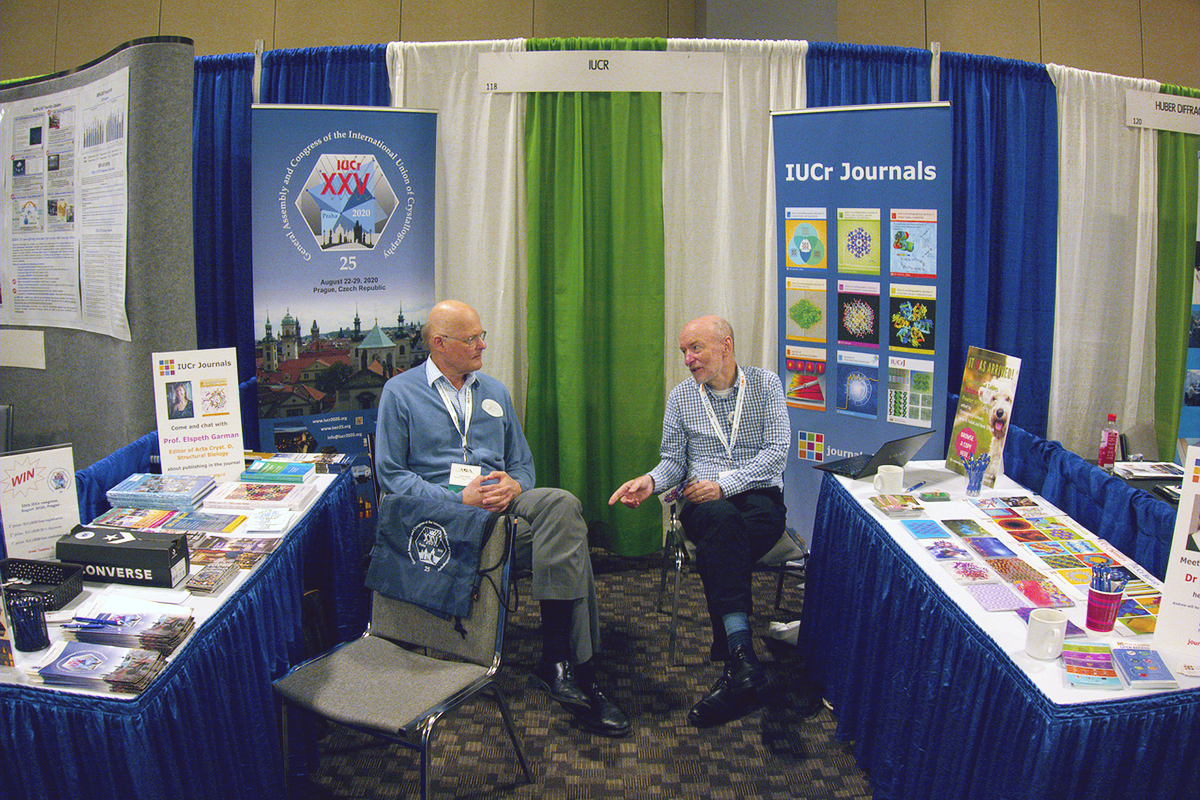 We have also been working hard to promote the Congress. We shared a booth with the IUCr at the APS (American Physical Society) March Meeting 2019 in Boston, MA, USA, which hosted nearly 12,000 participants, and did the same at the ACA meeting in Covington, KY, USA, in July 2019. In order to attract more people, we ran a competition for a free registration to the Congress (other prizes were a 50% discount and a free ticket for the conference dinner). Unfortunately, the next ACA meeting is scheduled for 2020 in San Diego, CA, USA, about two weeks before the Prague Congress, so it may be inconvenient for people to attend both conferences. Of course, we were also present at ECM32 in Vienna, Austria, where we shared a booth with the German Crystallographic Society, which is going to bid for IUCr2029 in Berlin. In addition to posters and promotion materials we also served Pilsner beer. We brought two 30-litre barrels and just occasionally the beer was finished about five minutes before the end of exhibition. 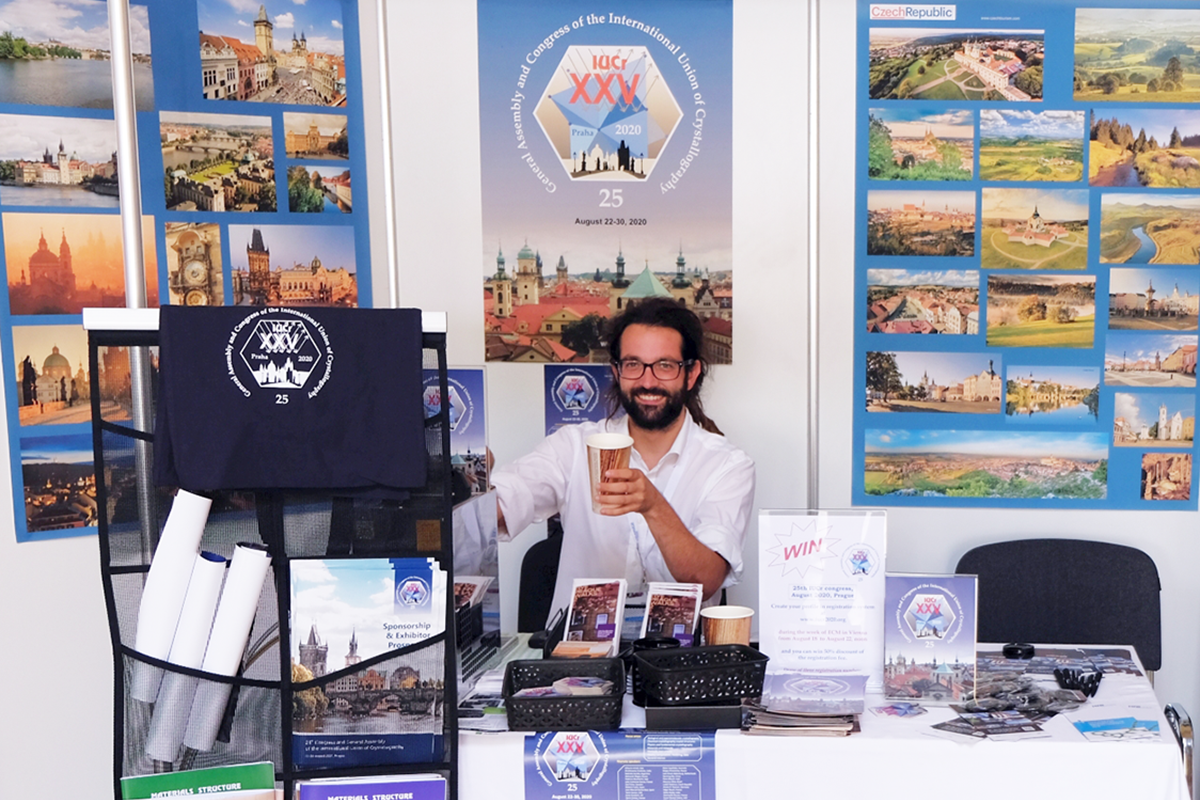 PCO Martin Haloun at the Congress booth at ECM32.

During discussions at these meetings and subsequently, we have come to an agreement with some sponsors and exhibitors. We can announce that the platinum sponsor will be Rigaku, the combined gold–silver sponsor Bruker/Incoatec and the gold sponsor Anton Paar. ICDD is considering the bronze sponsorship. We hope to have even more companies interested in these packages.

View from the Prague Congress Centre.

We are also discussing the social programme. The conference dinner will take place in the historic National House of Vinohrady, not too far from the congress centre. The last day of the conference, 30 August, is a trip day. One of the trips we are going to offer is an excursion by train to the historical town of Český Krumlov in South Bohemia.

The registration system has been opened and accounts can be created here. The system will be used to keep users informed of all important updates and for abstract submission, registrations (congress, workshops, events, trips) and payments.