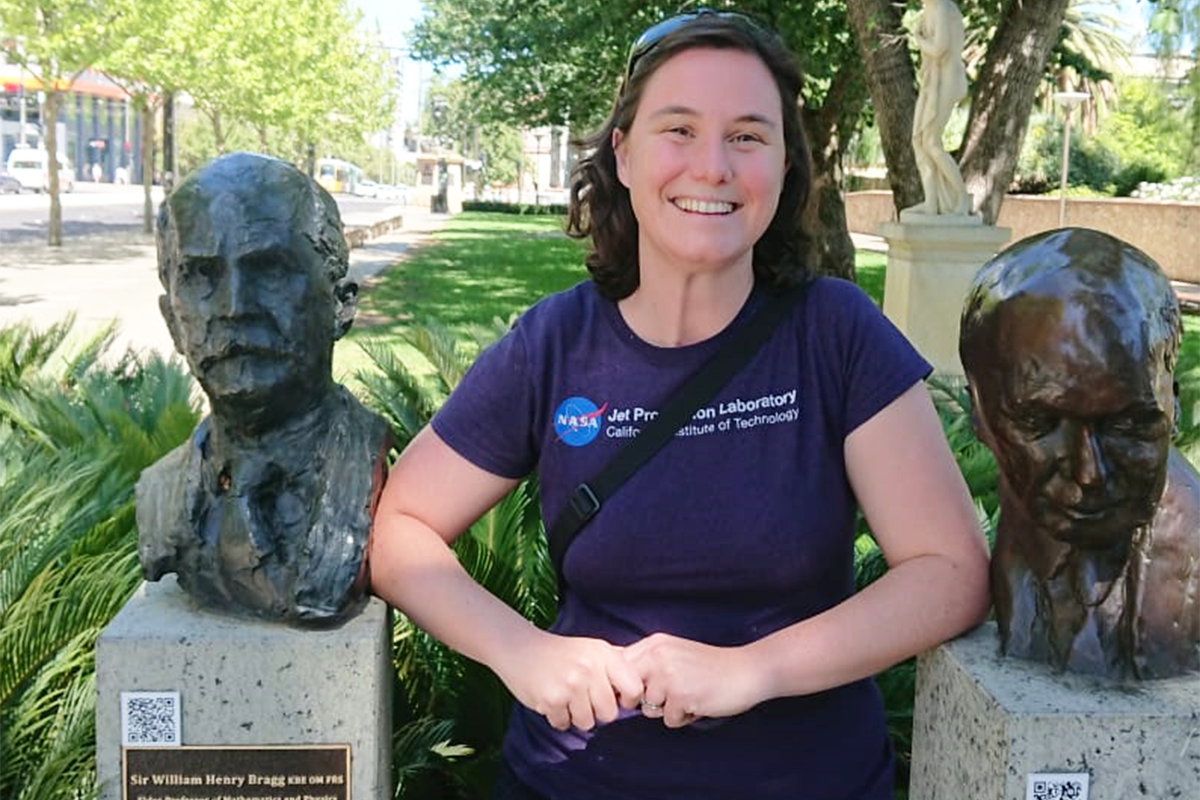 Connecting researchers with school students is challenging. It is a challenge for the researcher to find time and funds to allow them to travel and speak to schools, and increasing demands on students' timetables means it is challenging to carve out time for extracurricular work. Add to this the challenge that your 25 million strong population is spread over an area the size of Europe then you can see the challenge that the Australian Institute of Physics (AIP) took on in getting new faces of physics into schools.

There’s a real need for them to do this though. Nationally about 20% of those studying physics in Australia at university level identify as female. That’s an improvement on numbers 20 years ago, but still something that sets physics in Australia apart from other STEM (Science, Technology, Engineering and Mathematics) subjects. Part of the modest rise may be down to the successful Women in Physics lectureship that the AIP has undertaken since 1997.

The motivation to start the lectureship started in South Australia where the local branch of the AIP wanted to honour the legacy of a colleague, Claire Corani, who had died in tragic circumstances. Conversations between other state branches led to the Claire Corani Memorial Lecture (as it is known in South Australia) being extended into a national lecture tour. The lectureship awardee undertakes a tour of Australia, travelling to every state as well as Australian Capital Territory. It is awarded to someone who has (a) made a significant contribution in a field of physics research and (b) demonstrated public speaking ability.

This year it was me! It’s rare now that crystallography is treated as its own subject and so most of us have to find homes in other departments, mostly it would seem in those of chemistry and biology. I found myself learning my trade of crystallography in a physics department, and have continued to use these skills in my research to discover the crystal structures of materials formed all over the solar system. I’m now based at a central neutron scattering facility, the Australian Centre for Neutron Scattering, where I’m co-responsible for the high-intensity neutron diffractometer that we call Wombat.

I started with a bold title "How neutrons can save the world", and designed a talk that introduced the unique properties of the neutron and how we can use neutron scattering to study a range of problems, both on- and off-world. And before I knew it, it was time to set off. On the afternoon of 5 August 2019, I flew to Devonport in northern Tasmania to start the tour. Forty events later, I finished the tour at the Victorian "Girls in Physics" breakfast event held at Monash University. In that three and a half weeks, the tour had stretched from Hobart to Townsville, to Wollongong and Perth! 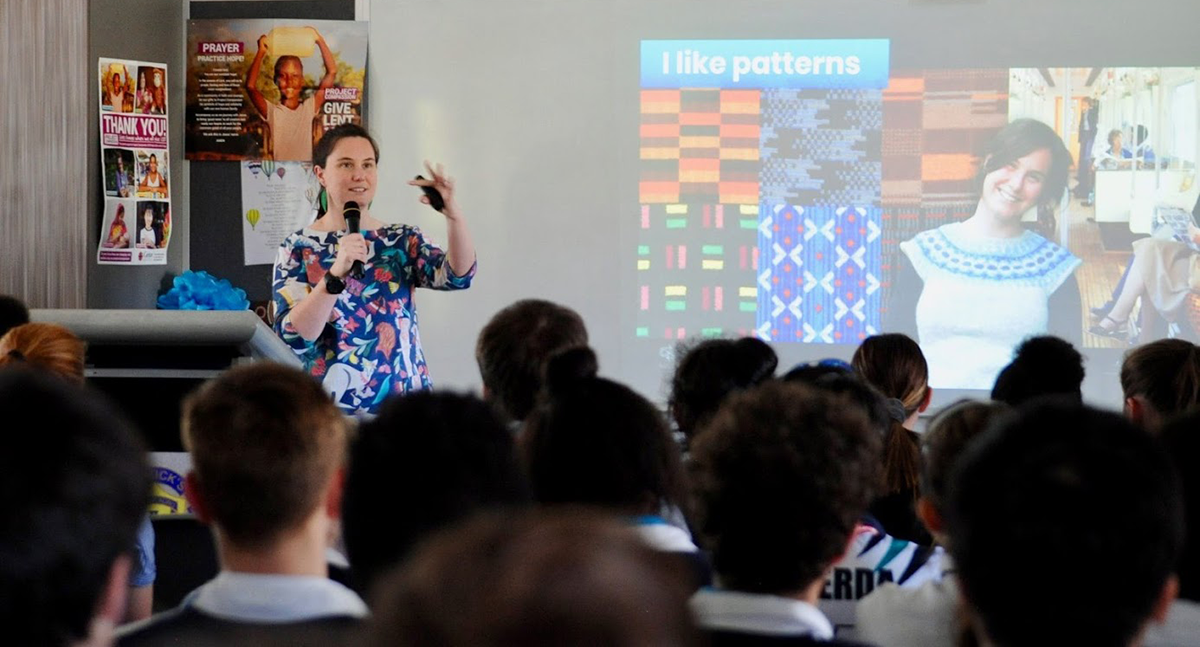 A general highlight of the tour was that it really pushed my sphere of interactions with people! What I discovered on the tour is that recruiting and retaining specialist physics teachers here is a real challenge, both in regional (non-urban) and urban areas.

In terms of particular events, two stand out for me. The first was the visit to Oakey High School, in regional Queensland. It was organised by the school's physics teacher, Mitch Holgate, and Queensland AIP co-ordinator, Joanna Turner. Not only were the students there really engaged – definitely some of the best questions came from that session – but also the head of science, Jelena Edhouse, had baked a whole periodic table of cupcakes! A second event highlight was the visit to SIDES, the School for Isolated and Distance Education in Perth, organised by teacher and Western Australia AIP co-ordinator, Diana Tomazos. It was a totally different experience presenting to camera, with students tuning in from thousands of kilometres away. And they let me sign the studio door, a privilege usually reserved for famous people, like Nobel Prize winners! 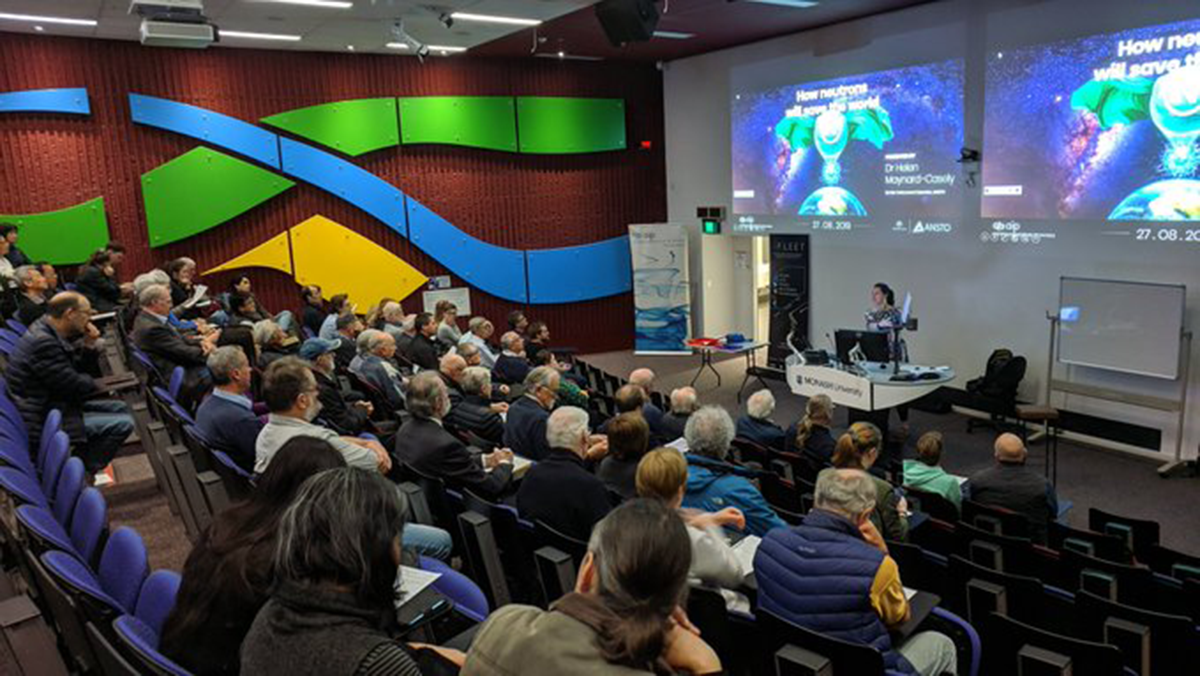 The tour took me to nearly every physics department in the country, and provided me with an unrivalled opportunity to get a great picture of the research that is undertaken in Australian physics. My skills in talking to a range of audiences have improved dramatically. A great feature of the tour is the range of events that are included – from talking on local radio, morning teas with physics students, and public lectures to seminars in physics departments around the country.

The AIP is currently looking for its next Women in Physics lecturer; for 2020 they are seeking an international-based researcher. If you have a lot to say about physics, identify as a woman and fancy a tour round Australia speaking to some very keen and interested students, do apply!