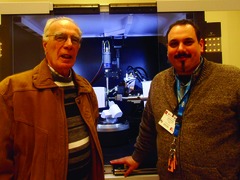 Raúl Mariezcurrena and Leopoldo Suescun during the inauguration of the IUCr/UNESCO OpenLab in Montevideo, Uruguay, in 2014.

On November 26, 2016, after a short disease, Raúl Mariezcurrena passed away at his birth city, Montevideo. A Professor Emeritus of Crystallography at the Facultad de Química, U. de la República, in Montevideo, Uruguay, Raúl started his training in Crystallography and X-ray diffraction under Adolfo Amit (1925-2007) at Facultad de Química, also receiving some training from Stephenson Caticha-Ellis (1930-2002) at Facultad de Ingenieía (before he left the country for Brazil in the late 60s). Thanks to a scholarship supported by UNESCO he spent a year between 1972-1973 at the Inorganic Chemistry Dept. of Aarhus U. in Denmark, where he was trained in single-crystal structural analysis by Svend Erik Rasmussen producing his first publications (Mariezcurrena et al., 1972; Mariezcurrena & Rasmussen, 1973). Back in Uruguay he kept the Crystallography Laboratory at work during the Military ruling (1973-1984), a period where research was disregarded as an important university activity in Uruguay. After recovery of normal activities, he trained six Master students and one PhD student in crystallography. He was a frequent participant in the Ibero-American Crystallography Meetings and organized the XIII Meeting and III School of the Iberoamerican Group of Crystallography in Montevideo in 1994 where young Uruguayan colleagues had the chance to meet top crystallographers in the region and 1984 Nobel Prize winners J. Karle and H. Hauptman, among other prestigious crystallographers such as Ray Young.

Raúl was an excellent lecturer, teaching classical physics at secondary and university level all along his career. His early retirement from the Professor position in 2002 did not prevent him from teaching some crystallography at the Teaching-training Pedagogical Inst. in Uruguay until 2012 when he finally retired from all teaching activities. Even though retired, Raúl participated in the inauguration of the IUCr/UNESCO OpenLab sponsored by Bruker in Montevideo in July 2014, one of the most important activities of the International Year of Crystallography in Uruguay.

Raúl will be remembered for his teaching skills, his enthusiasm when he was in front of a fresh hkl file ready to solve a structure but mainly for keeping crystallography alive in Uruguay during hard times, teaching Weissenberg and Buerger camera use (only available instruments in the lab) till the early 90s, catching the interest of students that are now Professors in the current group of the Crystallography, Solid State and Materials Chemistry Laboratory (Cryssmat-Lab)/Cátedra de Física at Facultad de Química, U. de la República in Montevideo.