Acta Cryst. B (http://journals.iucr.org/b) is pleased to announce the appointment of a new additional Main Editor, Ashwini Kumar Nangia. Nangia, who is based at the School of Chemistry, U. of Hyderabad, India, established his research group working on the synthesis of natural products and enzyme inhibitors, and continued research in this field until 1995. He then shifted focus to supramolecular chemistry and then crystal engineering in the second half of the 1990s. He established an active research programme in the emerging topics of host-guest inclusion compounds, hydrogen bonding, inter-halogen interactions, polymorphism and co-crystals, and made seminal contributions over the next decade. From 2005 to the current time, his research group continues to direct efforts on solid-state pharmaceutical co-crystals, polymorphs and eutectics with the idea of drug translation to make improved medicines. A member of the IUCr Commission on Structural Chemistry, Nangia took over as the 11th Director of CSIR-National Chemical Laboratory (CSIR-NCL), Pune, India, in February 2016 (www.iucr.org/news/newsletter/volume-24/number1/nangia-at-ncl). 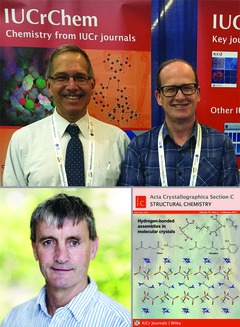 Acta Cryst. C (http://journals.iucr.org/c) welcomes two new Section Editors, Larry Falvello (pictured top left, beside Managing Editor Sean Conway at the ACS Fall Meeting in Boston in 2015) and Jonathan White (bottom left). Falvello is Professor of Inorganic Chemistry at the U. of Zaragoza, Spain, where he is also a member of the Aragón Materials Science Institute. Falvello's research programme in the physical properties and transformations of molecular solids combines the synthesis of new coordination compounds of transition metals and lanthanoids, using ligands rich in functional groups, with their structural characterization and studies of their physical properties and possible transformations. White is Professor of Chemistry at the U. of Melbourne School of Chemistry, Australia. His wide research programme includes structural organic chemistry, where he has applied the structure correlation principle to a number of organic chemical reactions and rearrangements. White is also particularly interested in the use of accurate low-temperature X-ray determinations of model organic compounds to investigate donor-acceptor interactions between a variety of functional groups in both organic and organometallic compounds.