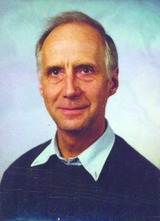 Howard's PhD project, Studies of disorder in anthrone and in mixed crystals of anthrone-anthraquinone, exposed him to the need for a deep understanding of the diffraction process and its mathematical treatment. The introduction to his 1970 paper Calculation of dimensions of ordered regions in triclinic and monoclinic pseudosymmetric crystals from the intensity of diffuse scattering reveals a train of thought that was to reemerge a decade later in his work on absolute structure determination, and his desire to provide a detailed mathematical explanation of physical processes.

After gaining his PhD, Howard worked at the Cavendish Laboratory in Cambridge (UK) where he met Evelyne, a visiting Swiss girl whom he would marry. In 1972 Howard became an assistant to Erwin Parthé in the Laboratoire de Cristallographie at the U. of Geneva, Switzerland. Parthé's interdisciplinary Crystallography Laboratory was a central facility serving the Faculty of Science of the university. A year later, an Institute of Crystallography was created at the U. of Lausanne, and the U. of Neuchâtel and Basel developed structure determination services. Howard collaborated with all these start-ups and was involved in their success. For many years, the X-RAY76 program system was developed jointly at Geneva and Lausanne. Howard contributed code to X-RAY76 until its demise in the 1990s. He remained in Geneva until his retirement. He was part of the technical staff, but his brilliance, wit, courage, and generous unselfish services to the Swiss and international crystallographic communities outshone his professional position.

From 1981 to 1990 he was secretary of the Swiss Society of Crystallography. His work with Parthé on highly absorbing crystals of SmAu6 (μR = 5.9) made him realize that the approximations made in the absorption corrections of North et al. and Kopfmann & Huber were inappropriate. The problem was resolved by representing the absorption profile as a Fourier series, an idea which has since been developed to use spherical harmonics. This and all subsequent non-analytical absorption corrections essentially reduce the sample to a sphere, which will have an effect which cannot be corrected for experimentally. Alternative suggestions for dealing with this residual error are given in his paper Automatic absorption correction using intensity measurements from azimuthal scans. The computations were implemented in the computer program CAMEL JOCKEY, an early example of his anarchic sense of humour. The absorption algorithm was extended and appeared as the program CAMEL JOCKEY WITH THREE HUMPS, also compatible with the X-RAY76 software system.

Howard continued to have a deep interest in the problems associated with obtaining the best quality experimental data, especially as a result of his growing interest in the determination of absolute structure by X-ray diffraction. Prior to Rogers' introduction of his η refinement, absolute structure estimation had depended on the careful examination of a small number of carefully measured reflections. Rogers' idea, related to earlier attempts to experimentally determine anomalous (resonant) scattering factors, introduced a refinable parameter into the main structure refinement. Howard realized that the η parameter became singular midway between its extreme theoretical values, and that the problem could be better posed by regarding the sample as a twin containing x and 1 − x twin fractions of the two enantiomers (with x a refinable parameter) in an analogous way to his 1970 treatment of disorder. This elegant solution to the problem of absolute structure determination proved to be enormously popular, with the twin fraction x quickly being called the Flack parameter. 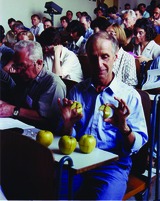 Howard was now even more in demand as a speaker and authority on absolute structure determination. He particularly enjoyed being with students and would take every opportunity to get them to talk about their own work. He was somewhat disappointed that his work on chirality overshadowed his other contributions, including publications On the definition and practical use of crystal-based azimuthal angles and Merohedral twin interpretation spreadsheet, including command lines for SHELXL, and his papers on the intensity statistics of Friedel pairs.

Howard saw, very early on, the contribution modern computer-based communication systems could make to the dissemination of crystallography. His contributions to the digital publication of IUCr material, to the structured archiving of data and to the crystallographic community are detailed at www.iucr.org/people/crystallographers/flack_ep.

Howard's knowledge of the early crystallographic literature led him to reinvestigate old problems. His 2015 paper on the Patterson function returns to the use of the resonant difference Patterson function, something he had briefly visited in Practical applications of averages and differences of Friedel opposites (2011). In that paper he wrote 'The Fourier transform of D has never been used in structure solution but a simulation by Woolfson (International Tables for Crystallography, Vol. B, Reciprocal Space, ch. 2.3, pp. 235-263) confirms that it has interesting properties.' Naturally, Howard could not leave anything with 'interesting properties' alone for long.

Howard was in the middle of active collaborations when he fell ill, but he was determined not to let his condition interfere with his dreams. Just a few weeks before he died, he had drastically reorganized a draft manuscript and changed the prosaic title to 'HUG and SQUEEZE:' etc. One could not help remembering the CAMEL JOCKEY, with or without the humps.

With Howard, we have not only lost an influential scientist and teacher, we have also lost a widely interested and cultured person. He was well read and familiar with, for example, Tristram Shandy as well as with the lore of Middle-earth. He loved music, opera and concerts. With Evelyne he assembled and restored an impressive collection of vintage toy trains and railway accessories produced by the British firm Hornby between 1920 and 1963. He was a good downhill skier and horseback rider. And he was a wonderful companion with a fresh humour, funny and fair. He is survived by Evelyne, his son Patrick and his daughter Christine.