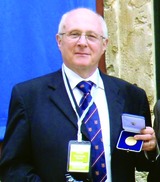 Davide Viterbo was a crystallographer, a chemist and a teacher, who will be remembered for his genuine love for science and research. Being endowed with great openness and humanity, he cultivated a variety of social and professional activities, aimed in particular at the national and international dissemination of science and culture.

On starting his career at the U. of Torino, Italy, in 1962, he pioneered X-ray diffraction techniques and mastered in crystal structure determination with the enthusiasm of the young chemist, being one of the first to start 'photographing' molecules and crystal structures. He realized how much there remained to do in methodologies, in particular concerning the solution of the phase problem, and moved into the theoretical area of direct methods. He managed to contact the most brilliant minds in the area, including Herbert Hauptman, the future Nobel laureate of 1985, and Michael Woolfson. In the late 1960s and early 1970s, he deepened his relation with Michael during long training periods in the UK (at the Universities of Oxford and York). People attending the historical 1974 Erice School on direct methods recall that Davide was already a recognized expert and a member of the teaching staff alongside other legendary names, including, besides Hauptman and Woolfson, 'stars' like David Sayre, Peter Main and others. On that occasion, Davide fully showed his natural skill for transforming complicated concepts into simple ones, as was apparent from his own lectures or just sitting next to him while attending seminars. His comments were never ordinary but enriched one's perception of the topic. The 1974 Erice School was also the start of a long-standing interaction with Carmelo Giacovazzo. As an apparent newcomer, the latter showed his already uncommon competence in all of the scientific discussions, thus anticipating his undisputed leadership in the field of direct methods. The partnership become highly synergic, in particular in Davide's role in the exploitation of Carmelo's innovative theories for the development and 'real-world' use of a computer package for structure solution (the SIR series), which has received worldwide attention and is still used now. The development of SIR was a complex task, which could be successfully fulfilled thanks to the full dedication of other excellent Italian minds such as various of Carmelo's pupils in Bari and collaborators from Perugia, Rome and Torino itself. Davide was also one of the authors of what can now be seen as the international crystallographer's bible, namely the textbook Fundamentals of Crystallography, edited by Carmelo Giacovazzo.

Davide Viterbo was highly respected among Italian crystallographers for his long and zealous activities on behalf of the Italian Crystallographic Association (AIC), of which he was one of the founders and then President from 1997 to 1999. He also worked at the international level, both in the IUCr and its Regional Associate, the European Crystallographic Association (ECA). For the latter, he served as a member of the Executive Committee in the years 2000-2002. Then in 2002 he was elected as a member of the IUCr Executive Committee, spending six years in that role. He chaired important committees, such as the Sub-committee on the Union Calendar (2008-2014), the IUCr/OUP Book Series Selection Committee and the Committee to select the winner of the eleventh Ewald Prize.

Davide was a highly respected Professor of Physical Chemistry at various Italian universities, where he contributed to the birth of new crystallography groups. Apart from his time in Torino, he founded from scratch the crystallography laboratories in Arcavacata di Rende (U. of Calabria, in the early 1990s) and in Alessandria (U. of Piemonte Orientale, since 1998). He raised funds for acquiring modern instrumentation and trained various young pupils, who went on to form flourishing research groups. As a spokesperson for these now not-so-young pupils, one of us (Milanesio) would like to emphasize the importance of Davide's role, formally as a supervisor and teacher, but also as a friend, advisor and supporter during every occasion in his pupils' scientific and personal lives.

As a scientist, Davide Viterbo produced a list of excellent publications, centered on direct methods in his early career and then on the extraction from single-crystal experiments of useful relations between the stereochemistry of molecules and materials with their properties. In the last two decades, with his keen foresight, he extended his interests to molecular modelling and powder diffraction, and these in combination with other techniques. It was an indication of his genuine passion that, at the AIC International School in Camerino, Italy, in 2011, he titled one of his memorable lectures Love Diffraction, But Do Not Let It Alone! In 2010 in Oviedo, Spain, he was awarded the first MISCA gold medal by the joint Italian and Spanish Crystallographic Associations for his work in disseminating crystallographic culture (he is proudly showing the MISCA medal in the photograph). On the occasion of his retirement in 2011, he was awarded a medal for his priceless contribution to the thriving of the association.

On all occasions Davide showed the greatest enthusiasm for tackling scientific and social tasks. An excellent storyteller, he recently presented numerous anecdotes about the history of crystallography and science, such as his personal memories of Herbert Hauptman and unprecedented viewpoints on personalities such as Primo Levi, Eligio Perucca and other historical characters. In January 2017, he reviewed the history of crystallography in Italy during the celebrations for the 50th anniversary of the AIC. Davide had a natural intellectual honesty and never indulged in any academic trickery. He also always offered unconditional support to people who asked for his help. In this respect, one of us (Carlo Mealli), as the Chair of the Florence IUCr Congress in 2005, wishes to express his eternal gratitude to Davide for the continuous encouragement and precious suggestions that transformed the event into a success.

The final words must be devoted to his beloved and now bereft wife, Mariella, who was always at Davide's side during his worldwide activities and represented for him an unconditional point of reference.