A double event to launch LAAMP

Both the IUCr and IUPAP celebrated the start of their joint project LAAMP (Lightsources for Africa, the Americas and Middle East Project), funded by the 2016-2019 ICSU Grants Programme, by hosting a kick-off event during the 24th Congress and General Assembly of the IUCr (Hyderabad, India, 21-28 August, 2017) and the 29th IUPAP General Assembly (São Paulo, Brazil, 11-13 October, 2017), respectively. 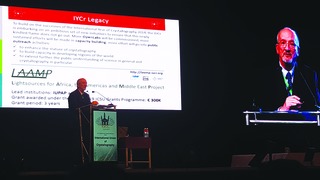 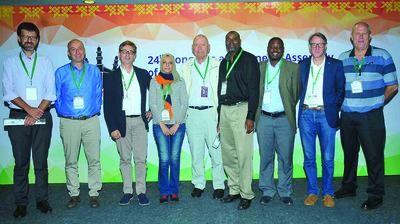 The LAAMP kick-off meeting at the 24th IUCr Congress was held as part of the Parallel Programme, a semi-formal programme running in parallel with the scientific sessions and focused on education, outreach and capacity building as well as general interest topics. The 150-min LAAMP session was chaired by LAAMP EC members Michele Zema (IUCr) and Sandro Scandolo (IUPAP), with over 40 in attendance. IUCr President Marvin L. Hackert (now Immediate Past President) welcomed the participants and emphasised the importance of joining efforts for such big, important projects. Daniel Nyanganyura, Director of ICSU Regional Office for Africa, presented the ICSU Grants Programme 2016-2019 and showed the many actions that ICSU is implementing for supporting science in Africa. The full framework of outreach and capacity-building initiatives run by the main international scientific and educational organisations was completed by Jean-Paul Ngome Abiaga, Deputy Executive Secretary of UNESCO-IBSP, who explained the importance of LAAMP also within the context of the UN Sustainable Development Goals. A general introduction to LAAMP was given by Michele Zema and Sandro Scandolo, whereas Andrea Lausi (Elettra synchrotron) explained the role of partnering Advanced Light Sources (AdLSs) and informed the audience about the progress of the preparation work for the brochure 'Advanced Light Sources and Crystallography: Tools of Discovery and Innovation', one of the tasks of LAAMP. The rest of the session featured contributions about the importance of AdLSs for sustaining socio-economic development, by using three case studies at three different stages of development: Aldo Craievich and Richard Garratt gave a thorough analysis of how a nowadays highly recognised scientific community was born thanks to the implementation of the Laboratório Nacional de Luz Síncrotron (LNLS) facility in Brazil, and how in relatively few years, the usage requests are so high that a new fourth-generation facility, SIRIUS, is under commissioning in the country. SESAME has started operations only recently, and Gihan Kamel emphasised the impact that such a facility will have on the scientific development of the Middle East and neighbouring regions. Finally, Andreas Roodt made the entire audience dream of a brighter future by presenting the concept and long-term planning for the African Light Source.

At the 29th General Assembly of the IUPAP, LAAMP was presented during the Commission Chairs Meeting and the General Assembly. In addition, a special 25-min session entitled 'The LAAMP Project: Advanced Light Sources for Development' was held as part of the workshop 'New Challenges in Pure and Applied Physics'. IUPAP President Bruce McKellar (now Immediate Past President), in his welcome speech, stated that LAAMP is one of the highlights of his term. Sandro Scandolo then introduced all actions and tasks of LAAMP, while José Roque da Silva (Director of LNLS, Brazil) spoke about the impact of the Brazilian light source and how it opened many new avenues of research for his country. He used the Latin American experience to explain the great impact that high-level scientific infrastructure can have not only on scientific development but also on the socio-economic conditions of a region at large.

The last call for applications from FAculty-STudent (FAST) Teams (new and continuing) to spend two months at participating AdLSs will be out in 2018. The faculty should be employed at a university in Africa, the Caribbean, Mexico or the Middle East and accompanied by his/her PhD student. LAAMP will provide 1818 Euros per person to cover transportation. Any excess will be applied to accommodation/subsistence. The remainder of accommodation/subsistence should be negotiated with the host AdLS and other sources of support. After the visit, the team should provide a description of the research conducted, including any resultant publications, and an evaluation of the non-scientific aspects of the visit, including positive experiences as well as ways that the visit could be enhanced in the future. Please watch for news of this third call at laamp.iucr.org. A list of the successful FAST teams from the first call can be seen at laamp.iucr.org/calls/first/awardees.