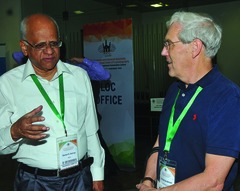 Richard Henderson, IUCrJ Editorial Board member and winner of the 2017 Gjønnes Medal in Electron Crystallography with Nigel Unwin, has been awarded the 2017 Nobel Prize in Chemistry with Jacques Dubochet and Joachim Frank 'for developing cryo-electron microscopy (cryoEM) for the high-resolution structure determination of biomolecules in solution'. 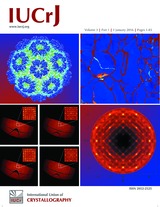 In 1995, Henderson published a rigorous theoretical analysis of the potential of cryoEM of single particles to determine atomic resolution structures of randomly oriented macromolecules. He identified key barriers to progress, particularly the need to develop better electron detectors and improved computer programs for single-particle image analysis. These methods, particularly the development of new direct electron detectors with higher detection efficiency, have revolutionized cryoEM as a mainstream structural biology tool, exemplified by the IUCr's decision to launch a cryoEM section in its premier journal, IUCrJ (https://dx.doi.org/10.1107/S2052252515023738).

Samar Hasnain, Editor-in-Chief of IUCr Journals, commented, 'Henderson continues to lead in the development of cryoEM by helping to solve remaining barriers, namely (a) the need for higher detector detective quantum efficiency, (b) the need to reduce beam-induced specimen charging and motion, and (c) the deleterious effect of interaction of biological macromolecules with the air-water interface during plunge freezing'.

Professor Hasnain went on to say, 'Henderson's vision and ability to identify and solve key problems while focusing on an important biological problem has transformed cryoEM, which has been adopted by X-ray-based structural biologists around the world'.

In August 2017 Richard delivered his Gjønnes Medal lecture at the 24th Congress and General Assembly of the IUCr in Hyderabad, India. A video of his talk entitled 'From electron crystallography to single particle cryoEM' can be viewed at http://www.youtube.com/watch?v=TR9kalpc6FY.