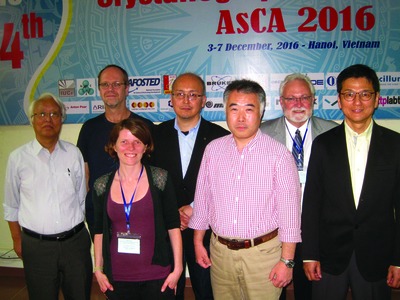 The opening ceremony of the AsCA meeting was preceded by a School of Single-Crystal Structure Determination on December 3 and 4, 2016. The basic theory of single-crystal structure determination was presented by Y. Ohashi (Tokyo Inst. Tech, Japan), and D. Hashizume (RIKEN CEMS, Japan) covered sample preparation and data collection. C. Campana (Bruker, USA) gave a summary of available programs and software for single-crystal data analysis and structure determination before focusing upon programs that specifically address the problem of twinned crystals. The program ROTAX identifies markers of twinning including the presence of forbidden reflection and inequality of 'equivalent' reflections and finds the relationship between the twins. Campana recommends using Shake-and-Bake after ROTAX. The talk illustrated the complexity of crystallization incorporating a lot of twinning and disorder that masquerade as single crystals. H. Puschmann (OlexSys, UK) talked about the details of single-crystal data collection, processing, structure determination and analysis and the use of the program Olex2. He described an automatically generated report with all the diagrams, pictures, tables and references required for publication. T. Ozeki (Nihon U., Japan) addressed the evaluation of results including crystal quality, proper space-group selection and other points addressed by Puschmann. He offered simple rules and went step by step over CIF file preparation. S. Ward (CCDC, UK) talked about the Cambridge Structural Database, which now contains over 850,000 structures and a set of 700 structures carefully selected to create a representative teaching database. She described deposition procedures in detail and many features of the standard output (chemical diagrams, molecular images etc.) that are useful for publication.

Dignitaries addressing the attendees at the opening ceremony on December 4 included Dang Vu Minh, President of the Vietnam Union of Science and Technology Associations, and Pinak Chakrabarti, AsCA President, who reported that of the 457 registrants, 86% were from Asia.

The first plenary lecture was given on crystallography and electron microscopy by S. Iijima (Meijo U., Japan). In 1970, using transmission electron microscopy (TEM), Iijima found evidence of carbon nanotubes. In the 1980s, he was publishing images that he eventually identified as carbon nanotubes. His Nature paper on carbon nanotubes [Nature, 354 (1991), 56-58] has had five times as many citations as the DNA paper of Watson and Crick. The 77-year-old Iijima's most recent publication is on one-dimensional nanowires of pseudoboehmite.

In his plenary lecture 'CryoEM of Molecular Machines', W. Chiu (Baylor, USA) demonstrated the power of cryoEM in the determination of the structure of a virus and a 2700 amino acid protein. The virus model begins as a 700 Å diameter cotton ball that becomes a textured cluster of 60 subunits of seven proteins, the backbones of which can be traced without human assistance. This is expanded to a model with side chains in which aromatics are easier to find and negatively charged residues are poorly defined. Two independent data sets were modeled independently and compared for consistency. The fold of the 7 x 60 proteins is excellent except at the termini where they diverge in seven ways.

M. Fujita (U. Tokyo, Japan) soaks target molecules in crystalline cage structures of the appropriate size to facilitate their structure determination. Encapsulated molecules in the cages take up fixed orientations and allow determination of structure. Over 70% cage occupancy is needed to get structure determination comparable to typical X-ray analysis. Heavy atoms in the cage structure remove the need to have an anomalous signal in the target for absolute configuration determination. He extracted three flavanoids from a piece of orange peel, separated them on HPLC and trapped each in a cage and determined the three structures. A cycloelatanene study reversed an erroneous NMR conclusion. He is trying to capture reactions in situ and to design cages large enough for proteins.

J. L. Martin (Griffith U., Australia) addressed antibiotic resistance via the disruption of disulfide bridge formation in virulence factors. Her research team is studying the crystal structures of a protein that forms disulfide bonds (DsbA). They found peptides that bound to DsbA and inhibited its function and discovered a disulfide shuffling protein that shuffles virulence factors back to their active form.

M. Li (Chinese Academy of Sciences) described structural studies of plant photosystem II (PSII) and contrasted the structure with those of the less complex plant PSI and cyanobacterial PSII. Her 3.2 Å structure of spinach PSII in a supercomplex with light-harvesting complex II (LHCII) has 25 protein subunits, 105 chlorophylls, 28 carotenoids and other cofactors. Based on the structure, the complete pigment network and the potential energy transfer pathways within the supercomplex were constructed, allowing analysis of the details of the evolution of photosynthesis from bacteria to plants.

T. Kamiyama (Inst. of Materials Structure Science, Japan) described using neutron diffraction to obtain accurate data on light atoms in functional materials. O. Sakata (National Inst. of Materials Science, Japan) surveyed synchrotron facilities for the study of materials in Japan and described the information one can obtain (valence band structure, occupied states etc.). A. Edwards (Australian Nuclear Science and Tech.) described the determination of the structures of multi kilodalton silver nanoparticles. She has found twinning in a structure where it had been overlooked. L. Q. Minh (Vietnam Materials Research Soc.) discussed the technology of rare earth nanomaterials. Vietnam has 22 million tons of rare earth minerals, many of which are important in electronics, optics, lasers, superconductors and optical emitters. Rare earth doping of LEDs can alter agriculture growth rate, and rare earth luminescent labels can produce imaging tools in biomedicine. Having expertise in phosphazane synthesis in solution, F. García (Nanyang Tech. U., Singapore) described how he explored mechanochemical (solvent-free) synthesis. He studied his starting material and goal, considered conditions that might work and experimented with dry cofactors. García reported that some syntheses that worked by mechanical techniques could not be synthesized in solution.

The microsymposium began with a talk on glutaminases as anticancer targets in which J. Sivaraman (National U., Singapore) showed a movie of an inhibitor causing a shift of six residues that inactivates the enzyme. A. Roujeinikova (Monash U., Australia) is investigating how a family of bacterial chemoreceptors (including carcinogenic H. pylori) sense and discriminate between attractants and repellents that can affect the potency of chemotherapeutic agents. H. Tanji (U. Tokyo, Japan) discussed how the binding of single-stranded RNA to toll-like receptor 8 induces innate immune response in relation to the treatment of auto immune diseases. M. I. Bin Anasjr (Australia) is studying pro-apoptotic and anti-apoptotic BCl-2 proteins in search of a way to increase production of the pro-apoptotic form to combat viral infection.

C.-J. Chen (Natl Synchrotron Radiation Research Center, Taiwan) described the capsid assembly and mechanism of infection of a virus that attacks the nervous system of large fish. They are exploring the basis of specificity of residues on the viral surface in order to find ways to disrupt viral assembly and protect the food source. M. Bostina (U. Otago, New Zealand) reported on a cryoEM study of a picornovirus with therapeutic potential to treat metastatic disease. He reported a similar fold of six different virus families including foot and mouth, entero and polio viruses. T.-H. Nguyen (Genetic Eng. Hanoi, Vietnam) compared the receptor-binding domains of non-human adenovirus capsids of turkey, raptor, goose, lizard and snake with each other and with the human adenovirus. H. Song described the unwinding mechanism of a DNA helicase of Bacteroides based on crystal structures of several complexes. X.-D. Su (Peking U., China) discussed the ethylene-insensitive transcription factor family of the ethylene signaling pathway. 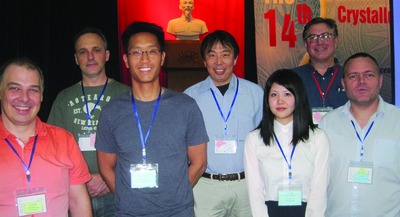 M. Wolf (Okinawa Inst. Science and Tech., Japan) used cryoEM to achieve a complete structure of the bacterial flagellar hook structure. EM, atomic force microscopy and small-angle X-ray scattering (SAXS) were used to study artificially constructed supramolecular protein assemblies in vitro (L. Lee, U. New S. Wales, Australia); neutron diffraction was used to determine the first structure of a ferredoxin-dependent bilin reductase to reveal the protonation state of the biliverdin and surrounding residues (M. Unno, Ibaraki U., Japan); SAXS, NMR and X-ray diffraction were combined to elucidate the folding in bacterial surface adhesins (C. Squire, U. of Auckland, New Zealand); and X-ray crystallography and SAXS were used to determine the structural basis for substrate specificity in a family of peptidyl arginine deiminases (A. M. Nagai, Ibaraki U., Japan).