The recent adoption of high-speed data-collection methods, especially CCD detectors, and the wider availability of user-friendly software such as XD (Koritsanszky, Howard, Mallinson, Su, Richter & Hansen, 1995) have attracted new workers to charge-density studies from X-ray diffraction data, extending the variety of the systems studied, as well as leading to greater penetration of the results in mainstream chemistry and physics journals. However, it is increasingly clear that limitations of the rigid pseudoatom model (multipole refinement) upon which most studies are based may be compromising the more ambitious studies, especially topological analyses, where the objective is to determine the fine details of the curvature of the electron density.

There seem to be two ways forward: (i) fine-tune the rigid pseudoatom model, especially the radial functions, or (ii) abandon the model completely. Examples of the latter approach include maximum entropy methods and the derivation of 'experimental wavefunctions' from X-ray diffraction data. However, the vast majority of charge-density determinations still use the multipole refinement procedure, and numerous model studies have appeared recently that explore its strengths and limitations. Especially active in recent years has been the Coppens group in Buffalo, and the latest publication by Volkov & Coppens [Acta Cryst. (2001). A57, 395–405] explores the use of additional radial functions on non-H atoms. 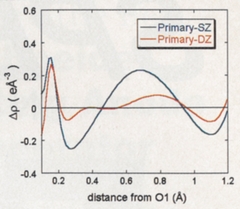 Difference between primary electron density and multipole-derived electron densities along the C1–O1 bond in methyl carbamate. Two-term radial functions (DZ,red) show considerable improvement over conventional radial functions (SZ, blue).
Using model structure factors computed from periodic ab initio calculations on several molecular crystals, Volkov and Coppens applied the usual Hansen–Coppens multipole formalism, as well as augmenting it with an additional radial function for the higher multipoles on C, N and O atoms. These single exponential radial functions, rnexp(-αr), offer two degrees of freedom: the power of r, n, and the exponent α. For first-row atoms, conventional choices for n are between 2 and 4, and α is obtained from atomic orbital products. But it has long been known that alternative sets of n and α would produce fits to the data of comparable quality, although the nature of the radial functions differs substantially as n is increased.

A more flexible pseudoatom may be obtained by adding a second radial function per multipole, with a different set of n and α. But what are the optimum values to choose for each atom? To answer this question, Volkov and Coppens performed several thousand model refinements, optimizing α for choices of n between 4 and 22 for a second set of radial functions on first-row atoms. Inclusion of additional radial functions led to significant improvements in the agreement with the theoretical electron density and topological properties along the bonds, but discrepancies still remained, especially for polar bonds such as N–O and C–O. The figure illustrates the improvement in the electron density for an O–C bond in methyl carbamate. Surprisingly, optimum values of n for the second deformation set were found to be as high as 20 and 22 in several instances, corresponding to quite narrow radial functions. The authors did not explore why this might be the case for some bond types, and do not provide a standard recipe for incorporating additional radial functions in multipole refinements. They conclude that application of this more flexible model will require experimental structure factors of exceptional accuracy, which is undoubtedly true if one aims to refine n and α simultaneously. However, it is worth remembering that Hirshfeld’s multipole model (Hirshfeld, 1977), seldom used today, has always incorporated two-term radial functions for some higher multipoles, albeit in a constrained fashion, and its demands on the X-ray data are much more modest. It would seem desirable to compare its performance with the one- and two-term Hansen–Coppens models. This paper provides some valuable guidance and much-needed impetus for future studies aimed at fine-tuning the multipole model.