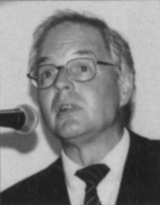 Prof. Schneider was born in Burgstädt, Saxony, Germany and studied Physics in Hamburg after an education as an electrical engineer. He did his PhD under the direction of H. Maier-Leibnitz at the Inst Laue-Langevin in Grenoble, France. His work on gamma-ray diffractometry and Compton scattering was performed at the Hahn-Meitner-Inst in Berlin, the synchrotron radiation work at DESY-HASYLAB in Hamburg. Prof. Schneider is presently Head of HASYLAB and Director of Research for Synchrotron Radiation and Free-Electron Lasers at DESY.