Mark Spackman’s commentary on the origins of the DNA structure paints a somewhat simplistic picture of what I understand to be the background to Watson and Crick’s 1953 Nature paper. Whilst it is true that 'No (basic) crystallographic information is presented (in the actual paper) and no crystallographic experiment was reported..' the whole thing is based largely on crystallographic results….. from other groups! Indeed around that time modelling DNA seems to have been a very prevalent occupation in many laboratories. They were all based on very crude fibre diffraction X-ray photographs which contained very little detail. The Watson and Crick model turned out to be the best at that time but was not properly validated until high resolution structures from single crystal analogues were produced (eg Lisgarten et al, Nature Structural Biology, 2002, 9, 57-60).

1) Watson and Crick were very much aware of the papers being prepared by members of the King's College, London, group and Watson in particular visited Maurice Wilkins' laboratory several times during the run up to the building of the structure model and writing the paper with Crick. They did not in fact need to be aware of the fine details provided in the 'following communications', only the basic parameters of the helix, a knowledge of stereochemistry and base pairing in DNA, and the inspiration, as the cartoon below shows, to build a double helical model (other groups had tried single and triple stranded models). 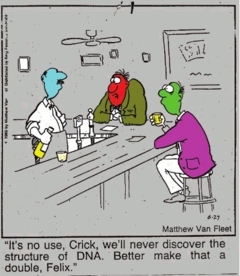 2) Nature has always been known as the elite publishing medium for a broad spectrum of current topics and it is inconceivable that the journal would publish 'little more than a hypothetical structure'. It is no coincidence that the three papers mentioned by Professor Spackman were published concurrently in Nature and one must conclude that this was an editorial decision and the editor did in fact recognise the importance of the interactions of this trilogy of papers. Nowadays groups tend to publish joint papers, with large numbers of co-authors, in order to strengthen the arguments presented. Apparently this was not so back in the 1950's.

3) The question as to 'leaving to you to decide whether the Watson & Crick model could have been devised while being 'not aware of the details' of the crystallographic results' does not arise. James Watson in his own account of the discovery of the DNA structure 'The Double Helix' (Weidenfeld and Nicolson, 1965, London) explains in some detail how it was accomplished. On p172 Watson says 'I started to run through the (known) details of the B form (of DNA) (subject of the famous Rosalind Franklin X-ray diffraction pattern)….the evidence (was) that DNA was a helix which repeated its pattern every 34Å along the helical axis.' On page 175 'Especially important was the meridional reflection at 3.4Å, much stronger than any other. This could only mean that the 3.4Å-thick purine and pyrimidine bases were stacked on top of each other in a direction perpendicular to the helix axis'. [Whilst this of course could not be proved, this vital feature of the model was not simply hypothetical but based on an experimental fact which had already been used by Astbury] 'In addition we knew from both electron-microscope and X-ray evidence that the helix diameter was about 20Å.' Another vital model parameter based on measurement.

Hence the basic geometry of the model depended upon known experimental evidence, albeit not measured by Watson and Crick per se.

The DNA model building itself which was designed to be in keeping with stereochemical principles, depended strongly on several other factors, all experimentally derived:

(a) The geometry of cytidine determined by the crystallographer Sven Furberg.

(b) The nature of the base pairing (Chargaff's rules).

(c) The possible base pairing H-bonding patterns and their geometry. This could be derived from a wealth of crystallographic data, and was revealed to Watson and Crick by Jerry Donohue, a renowned world expert on H-bonding in 1953.

The Watson and Crick model whilst being somewhat rough and ready was consistent with the main features of the B DNA fibre diagram. Ironically Rosalind Franklin from King's College, and afterwards Birkbeck College, London University had better, more detailed data, derived from her beautiful DNA photographs and was working towards a more conventionally derived model, using Patterson functions, but was unable to complete this work due to her fatal illness ('Rosalind Franklin, the Dark Lady of DNA' by Brenda Maddox, Harper Collins, 2002, is a very good read). Other workers had of course tried unsuccessfully to derive DNA models, including Astbury, Furberg, and Linus Pauling. Watson and Crick's model has stood the test of time, including several periods when it came under severe criticism, and is now generally accepted as being essentially correct. As revealed in a BBC documentary Watson and Crick did fail to include some of the finer details and were criticised by Rosalind herself for excluding the biologically important water molecules.