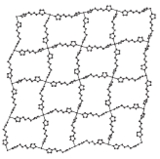 The two-dimensional sheet of the (4,4)-network.

The research in coordination polymers has been rapidly expanding because of their fascinating structural diversity and potential applications as functional material. Much of the work has so far been focused on coordination polymers with rigid ligands. This paper reports on the preparation and crystal structure of a CdII coordination polymer with a flexible ligand 1,1'-(1,4-butanediyl)diimidazole (L). The CdII cation occupies the inversion centre, and is six-coordinated by four nitrogen atoms from four L molecules, and two chloride anions. Each L molecule coordinates to two CdII cations through its two aromatic nitrogen atoms acting as a bridging bidentate ligand. The CdII cations are bridged by four L molecules to form a two-dimensional neutral (4,4)-network. The square-grid sheets superpose in an off-set fashion.