The 21st European Cystallographic Meeting was held at the International Convention Center (ICC) in Durban, South Africa, and was attended by over 500 official delegates and 50 accompanying persons from 49 countries, making it the largest gathering of crystallographers in Africa to date. Approximately 100 students and younger scientists were able to attend as a result of sponsorships from particularly the IUCr, ECA, South African NRF and the South African government (DTI and DACST). 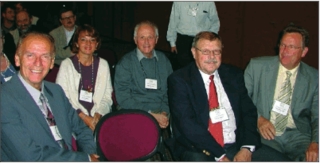 C. Lecomte, President of the European Crystallographic Assn (ECA) formally opened ECM-21 on Sunday evening, attended by different guests of honor, including W. Duax, President of the IUCr, and Mayor Mdladla, of the greater Durban Municipality (eThekwini), who also hosted the opening mixer.

On Monday evening, C. Giacovazzo (Bari, Italy) received the ECA Prize from the President for his contribution towards crystallography. Carmelo then delivered the prize lecture 'Phasing powder data, small- and macro-molecules: a unique project'. 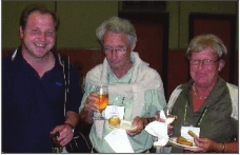 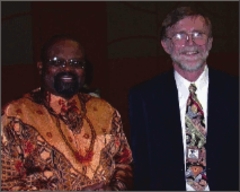 Mayor Mdladla and Bill Duax at the opening Mixer.

Sponsorships provided a backup to the meeting, although it was a bit disappointing that both larger South African and European companies were reluctant to contribute to the meeting – even by just sponsoring individual students from Europe. Nevertheless, the main sponsors of the meeting ensured that we could provide necessary administrative backup to have a successful conference. These sponsors are specifically thanked for these valuable contributions. Furthermore, last minute sponsors for refreshments are also thanked for ensuring that delegates were not overcome by thirst during the poster sessions and tea/coffee breaks in the hot Durban climate.

There were sixteen exhibitors, including stands from our sponsors. We are particularly thankful for all the companies that exhibited to ensure that delegates could access first-hand information on new equipment developments.

Two poster sessions were held on Tuesday and Wednesday afternoons. All posters were displayed for the whole meeting to ensure maximum exposure and interaction between delegates. Although being a bit more demanding on infra structure, in general very favourable feedback on this poster session format was received from the delegates.

ECM-21 was organized by the South African Crystallographic Assn (SACrS), under the auspices of the ECA, and the general commercial aspects were handled by Conference Call, headed by L. Volker. The website and Abstract book were the responsibility of D. Billing (Wits), D. Liles (Pretoria), M. Fernandez (Wits) and J. Dillen (Stellenbosch). Both groups need a special word of recognition for streamlined work and continued dedication.

The closing ceremony and banquet was held on Thursday evening in a large Marquee tent, delegates enjoying a selection of 'spit' barbequed meats and wines amidst traditional Zulu and African Latin dances. Many delegates used the opportunity to try their Zulu war dance techniques, with limited variations of success. 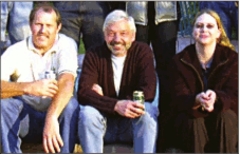 During the closing banquet J. Boeyens gave a brief overview of some aspects of South African Crystallographic history with details on some of the interesting and eccentric people who contributed toward establishing the community here.

Disembarking from game viewing vehicle at Tala game reserve: Leo Kirsten (Joburg) with Elena Boldyreva (Novosibirsk) and Emil Makovicky (Copenhagen, Denmark) in background.
The delegates were given the opportunity to put on their safari jackets to prepare for the game park trip on Friday to Tala Game lodge. They had the opportunity to see different game, the 18 giraffe specifically 'standing out' as well as the close-up on rhinos, and for those who were lucky, appreciating the hippo when the lazy-looking creatures showed a bit more body from the muddy water.

Unique difficulties were experienced with regard to the budget, and eventually it had to be tightened significantly. Thus, we are especially grateful to sponsors committed from the beginning to support us, but also late sponsors enabling a continuous flow of delegates in the exhibition area, without whom we would have struggled to make ends meet.