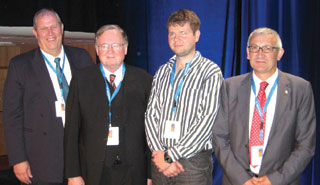 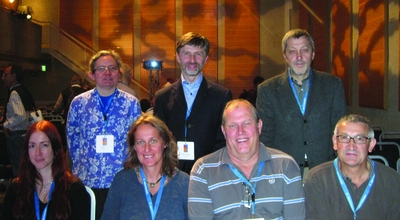 Over 600 crystallographers from 46 countries, including 114 students and 65 exhibitors, attended the 2012 European Crystallography Meeting in remarkably picturesque Bergen, Norway. Over the course of three and a half days, 16 plenary lectures and 44 microsymposia covered the latest advances in all aspects of X-ray crystallography including instrumentation, methods and applications. Plenary lecturers included the most recent winner of the prestigious Aminoff Prize, Mark Spackman (see article here) and former Aminoff awardee, Michael Rossmann. Faced with the difficult choice of which of the six simultaneous sessions to attend each day, this review covers only a small sample of the excellent science reported. Summaries of other sessions would be welcomed by the editors.

The opening session featured a masterful lecture by D. Schwarzenbach (Switzerland) entitled 'The Laue Centennial. The Birth of X-ray Diffraction'. He described how, following the discovery of X-rays by Roentgen, von Laue surmised that crystals would diffract X-rays and that the diffracted pattern would reflect the underlying structure within the crystal, as had been suggested earlier by morphological studies. In 1912, together with Friedrich and Knipping, von Laue demonstrated that his predictions had been accurate and, in the following year, the Braggs reported the structure of table salt. Schwartzenbach covered one hundred years of crystallographic highlights in a most entertaining fashion. 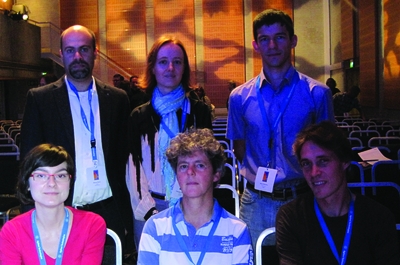 'Dynamics in Crystals' speakers and chairs: (front) A. Kuzmanic, L. Kroon-Batenberg, A. Madsen, (back) N. Pannu, F. Fabbiani and B. Zakharov.

In a session entitled 'Dynamics in crystals – experimental techniques and software', L. Kroon-Batenburg (Netherlands) illustrated how, a century after the discovery of X-ray diffraction, data collected with synchrotron radiation provides a wealth of knowledge about molecules that would have been beyond the imagination of the early pioneers: atomic resolution macromolecular structures; images of subtle crystal fractures; patterns of anisotropic and diffuse scattering related to dynamic and static disorder; incommensurate structures; and the effects of temperature and pressure on structure.

A. Madsen (Denmark) described how differences in the solid-state entropies of polymorphic compounds can be obtained from analysis of anisotropic displacement parameters, information of practical importance to materials and pharmaceutical research. 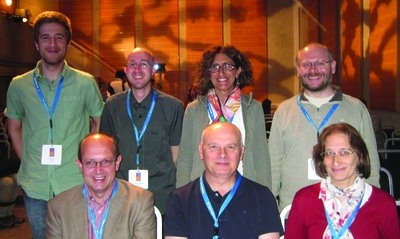 In a session on 'Design, structure and function of multicomponent crystals', F. Topić (Finland) discussed the molecular architecture of chains, channels and walls comprised of urea, thiourea and tetraalkyl ammonium salts, and how they aggregate to produce an array of new types of channel and cage inclusion compounds. A. Lemmerer (S. Africa) described covalent assistance to supramolecular assembly and his battles with referees about the use of the term 'blocking agents' to describe his methods of crystal engineering that involve replacement of hydrogen bonding donors with inert-hydrocarbons. Other talks in the session included co-crystallizing pharmaceutical agents to increase solubility (U. Griesser, Austria), trouble with the nomenclature of salt co-crystals with exotic stoichiometries (G. Coquerel, France) and ZnII complexes with luminescent properties useful in photonics (A. Crispini, Italy).

An innovative session entitled 'How To' addressed a range of important issues, including funding opportunities in the European community (S. Garcia-Granda, Spain), and strategies that produce better lectures (H. Powell, UK) and scientific articles (J. Helliwell, UK, who tapped in to his Yorkshire roots). In this session, A. Bacchi (Italy) described how to survive in academia and had valuable advice for all young crystallographers, especially women. When Bacchi received her PhD and considered applying for an advertised professorship her advisor told her not to bother because the post was earmarked for a man. Twenty years later statistics on women in senior positions in the sciences have improved to some extent but they have yet to achieve parity. Bacchi did point out that women have done better in crystallography than other areas of science. Her advice to young crystallographers was: teach at every level, be passionate about your work, serve the community, network, and be courageous, original and selfless.

E. Boldyreva (Russia) discussed the future of crystallography and teaching. She expressed concern over the fact that most courses in crystallography have disappeared from university curricula. She offered interesting examples of inductive teaching models in which observation generates theories and deductive models in which theory guides experiment. 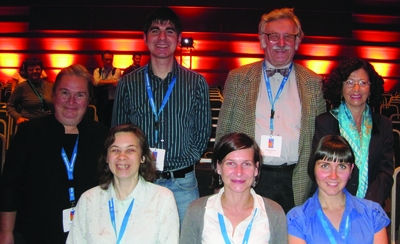 A session on 'Intermolecular interactions at ambient and extreme conditions' revealed how a broad range of studies at non-ambient temperatures and pressures have led to new ways of growing crystals and new information on material properties. A. Olejniczak (Poland) studied 10 polymorphs of a ferroelectric relaxor. These relaxors possess dielectric constants of over a thousand and are extremely effective at storing electricity in capacitors. Olejniczak’s experiments produced hydrated solvates unattainable at ambient conditions and revealed that the high dielectric constants of the materials disappeared at the highest temperature and pressures. Her talk included phase diagrams that were accompanied by beautiful pictures of crystals and structures.

In her plenary lecture on time-resolved crystallographic process in molecular systems, S. Techert (Germany) illustrated the inter-conversion of a low-energy monomer and high-energy dimer of a compound of potential relevance to the development of optoelectronics. The cyclical process of irradiation inducing formation of a stable dimer and heat causing the dimer to revert to the monomer was persuasively illustrated with a stunning movie. She also illustrated the change in the diffraction pattern associated with the transition. 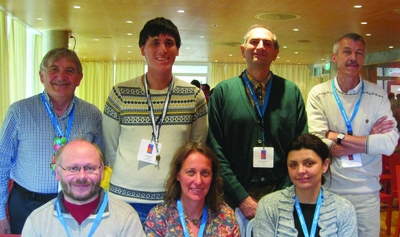 In 'Bioinformatics Informs MX (materials X-ray crystallography)', A. Bacchi (Italy) described the relative stabilities of α-, β- and γ-forms of tetraphenyl butadiene (TPB). The molecule has C2 point symmetry in the commercially available α-form and Ci symmetry in the β- and γ-forms. Bacchi explored the energy landscape of the three forms of TPB in isolation and in crystals by a variety of measures, discovering new properties including a fourth crystal form having two molecules in the asymmetric unit, one with each of the point symmetries, C2 and Ci. The results were illustrated with a movie of a whimsical stick figure dancing across the hills and valleys of an energy landscape. N. Bathori (S. Africa) discussed the profit motive behind the preparation of pure enantiomorphs and contrasted efforts to use inclusion compounds to effect enanantiomorphic separation with the Dutch Resolution Method. In the Dutch Resolution Method (Vries, T. et al., 1988, Angew Chem. Int. Ed., 37, 2349) a combination of two or three homochiral resolving agents with structures related closely enough to co-crystalllize are used to improve enantiomeric isolation. J. Ridout (UK) crystallized isomers of liquid fluorotoluenes at low temperature and high pressure and studied the properties of the resultant polymorphs to gain insight into the factors controlling crystallization. He reported that packing efficiencies were greater for the high-pressure forms than for the low-temperature forms. R. Centore (Italy) gave a lively presentation of single-crystal to single-crystal transitions including a movie of an exploding crystal. 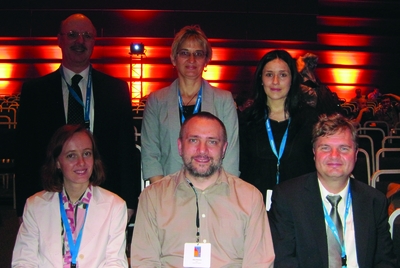