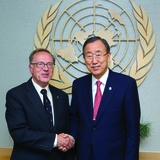 On August 26, 2012, Alex Wlodawer (Macromolecular Crystallography Laboratory, NCI, Frederick, MD, USA) participated in a reunion of a youth group that had previously visited the United States 50 years ago. They came then as participants in Operation VISTA, commemorating the 100th anniversary of the establishment of the US Red Cross. Now and then, they visited both the White House and the United Nations. Although the get-together this year was of a high profile, it had an informal and friendly atmosphere and allowed the participants to establish personal contacts with the UN Secretary General, Ban Ki-moon, who was also a VISTA participant. It is rewarding to see our colleague so well connected, especially in view of the UN resolution that has established the International Year of Crystallography, IYCr2014.