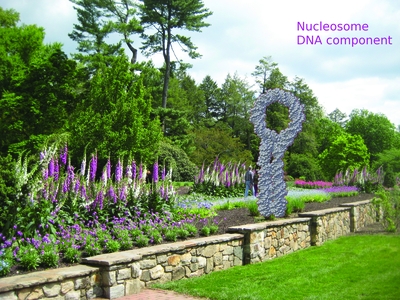 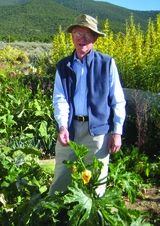 Edgar Meyer in his garden.

Throughout the ages crystals have been admired for their beauty and order. The Laue experiment 100 years ago let us peer deeply into an ordered universe and elucidate structures from salts to macromolecular complexes. Crystallography has elevated our understanding of our world and of ourselves.

But what does the world understand of atomic and molecular structures? Pictures in books and rarely on television suggest collections of atoms or iconic images like the double helix – they are necessary but not sufficient. And what about tomorrow? How many of these images have sustaining and aesthetic value, worth passing on to the next generation?

Recent editions of the ACA RefleXions and several European crystallographic newsletters have addressed current efforts to depict molecular structures as sculptures and animated images. In 1972 Rubin and Richardson used Byron’s Bender to shape muffler pipe to depict the secondary structure of rubridoxin at Duke. I began making precisely scaled wooden sculptures just over 10 years ago. Other examples can be found by searching Google for 'images for molecular sculpture'.

Rapid prototyping has become a facile way of creating desktop models of molecules. Some university or industrial shops have installed such devices; leaders in the field have been the Scripps Inst. (http://models.scripps.edu/) and 3D Molecular Designs (www.3dmoleculardesigns.com/).

While atomic models have been known since 1866, they are rarely found in the world around us – or even in the lab next door. There are monuments to generals and poets, athletes and animals, there are graceful sculptures and amorphous abstractions. Where are the sculptures of molecules? Should not such sculptures be part of a park or public space, part of our heritage, monuments to magnificent molecules, passed down to future generations?

In 2005 the Smithsonian commissioned scaled bronze sculptures (http://molecular-sculpture.com/Castings/Polio-bronze/SI-bronzes/SI-bronzes.html) of the polio virus capsid and the capsid:receptor complex (Hogle lab). In no time, the patina was worn to bronze from visitors feeling the symmetry of the surfaces. Sculptures are meant to be seen, felt, enjoyed. Metal structures weather the four seasons. Children can play on them – they thus will be our legacy to future scientists and the world of art.

But molecular sculptures are static, a snapshot view of a dynamic process. Why not create an animated video, a 'Laterna Magika', that shows how the sculpted structure plays a major role in one or more acts of the drama of life? Multilingual soundtracks could describe to the world some of the joy we know when we absorb the beauty of a new structure.

OK, you really would like to see a sculpture of your most significant structure out in front of your lab building. But how? By seeking industrial or foundation support? Or, many institutions have a provision associated with renovation or new construction to allocate 1-2% of the cost for decorative arts. It would require including colleagues in other fields to support the idea – but imagine the publicity – a bronze that would break the barriers of contemporary art by actually depicting a scientifically relevant image – the public would be amazed, scientists would be astounded, and children would be delighted to be able to play on a nitrogen or carbon atom.

So, to tell the world about the monumental success of our discipline, it will require individual scientists to take the initiative and 'sell' the idea. Future generations will thank you as they think back to this, our 'golden age' of crystallography.