Crystallography in the movies 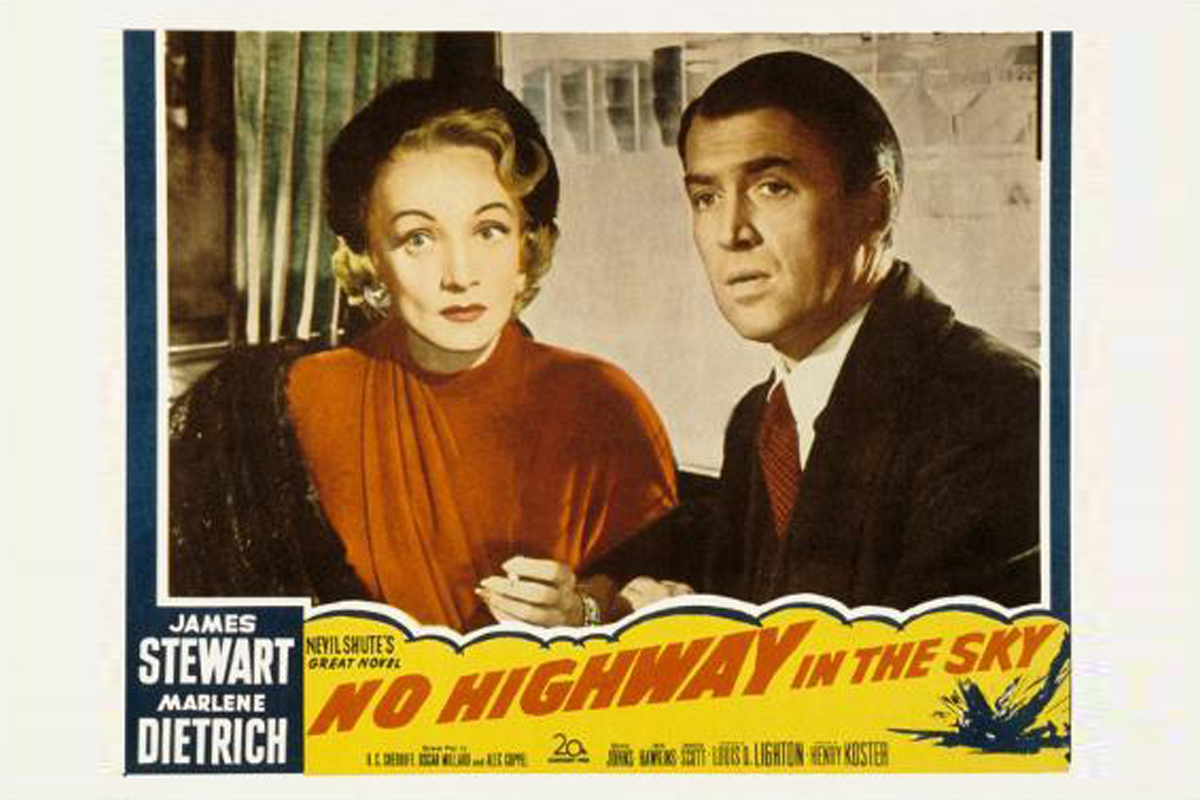 A few years ago, Immediate Past President of the IUCr, Marvin Hackert, drew my attention to a Hollywood movie in which the word "crystallography" is mentioned. The movie in question is "No Highway in the Sky", made in Britain in 1951 by 20th Century Fox, and can be seen, for example, here. The film stars, amongst others, the famous Hollywood actors James Stewart and Marlene Dietrich.

James Stewart plays the part of an aeronautical engineer involved in the design of a new type of aircraft, but he discovers that there is a possible fault in the design that would be catastrophic for the safety of the aircraft. Of course, he is rebuffed by his employers, but to determine if he is correct he takes a flight in the new aircraft along with other passengers, including Marlene Dietrich. The story is rather prescient in that three years later there were catastrophic crashes of the first jet airliner, the de Havilland Comet, caused by structural failure. Anyway, during the flight there is a short scene between Stewart and Dietrich in which they are having a conversation. I had wanted to include a clip here, but on contacting 20th Century Fox, I found that they wanted payment amounting to several thousand dollars (a bit out of the IUCr’s league)! Fortunately, however, I have found the relevant clip on YouTube

and the important part for our purposes is at 1:28 minutes into the clip. For convenience, I have written out below a transcript of the conversation between Stewart and Dietrich here:

MD: Haven’t you any family?

JS: Yes, I have Elspeth. That’s my little girl.

MD: That’s quite a lot to come back to.

JS: Oh yes. Why, that didn’t mean I wouldn’t like to. We are really very fond of one another. But, but I’ve been thinking about that. And… she’s 12 now. Her character has formed, I think. Mary did that, mostly. She,… that’s my wife. I wish it didn’t have to be like that. But she’s developed to such a point I think she is going to be alright. Of course, I haven’t been able to help in a lot of things. She is much more soundly developed than most children her age. She really has a remarkable grasp of crystallography.

JS: Well, it’s quite fundamental. It's always been odd to me that the schools don't teach it.

I love that last line! Now, this is quite remarkable, as the discussion between them really has nothing to do with the rest of the film. There must have been a reason for inserting this into this film, but why?

The clue, I think, is in the date and place of production, 1951. Because of the Second World War, which ended in 1945, Britain was in a severe state of depression. The country owed a huge amount of money and there were still areas of bombed sites. The government at the time decided that in order to lift the spirits of the country they would hold a national festival, 100 years after the Great Exhibition of 1851. Most of the new festival would take place on the South Bank of the River Thames in London, where all that is left today is the Festival Hall. This was called the Festival of Britain, and was intended to showcase all the latest in science and technology, pointing to a glorious future. I recall as a child of 8 years the excitement of going to see it. The Festival was intended to restore Britain’s faith in itself as a productive industrial nation after the ravages of World War Two, to promote better and more practical design in the rebuilding of the country’s towns and cities, and to celebrate innovation in British architecture, design, industry and the arts. More than 8.5 million people visited the Festival’s newly developed main site on London’s South Bank ­– those that came to dine at the event’s Regatta Restaurant were exposed to textile and furnishing patterns that came from a hitherto unexplored source: the molecular-scale images of X-ray crystallography. 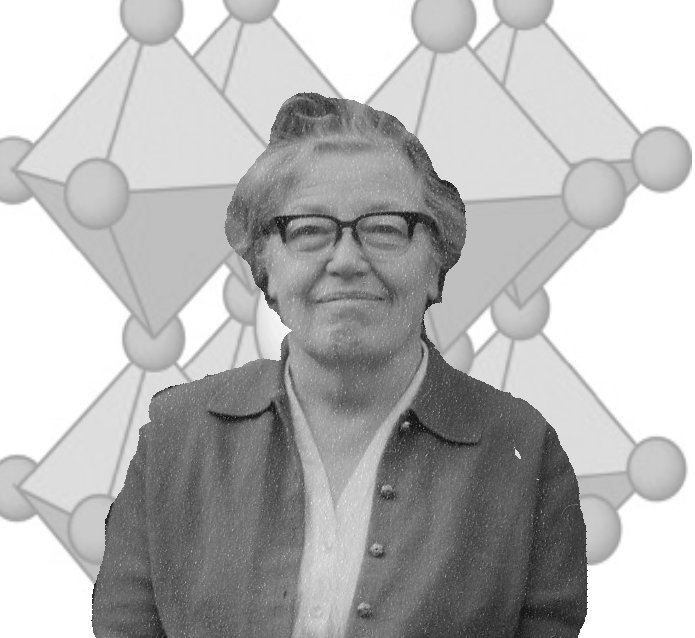 Figure 1. Helen Megaw, queen of the perovskite structure.
The crystallographer Helen Megaw (Figure 1), in 1946 at Birkbeck College, London, and later the Cavendish Laboratory, Cambridge, had the marvellous idea of suggesting crystallographic designs to the Director of the Design Research Unit: "I should like to ask designers of wallpapers and fabrics to look at the patterns made available by X-ray crystallography. I am constantly being impressed by the beauty of the designs which crop up." This later led to the formation of the Festival Pattern Group. With the cooperation of Lawrence Bragg, Kathleen Lonsdale, Dorothy Hodgkin and others many designs were suggested to be used as curtains, carpets, restaurant items etc. Helen Megaw was officially invited to act as scientific consultant in August 1949. The result was that throughout the Festival site, many designs based on crystallography appeared. Some examples are shown in Figures 2 and 3. 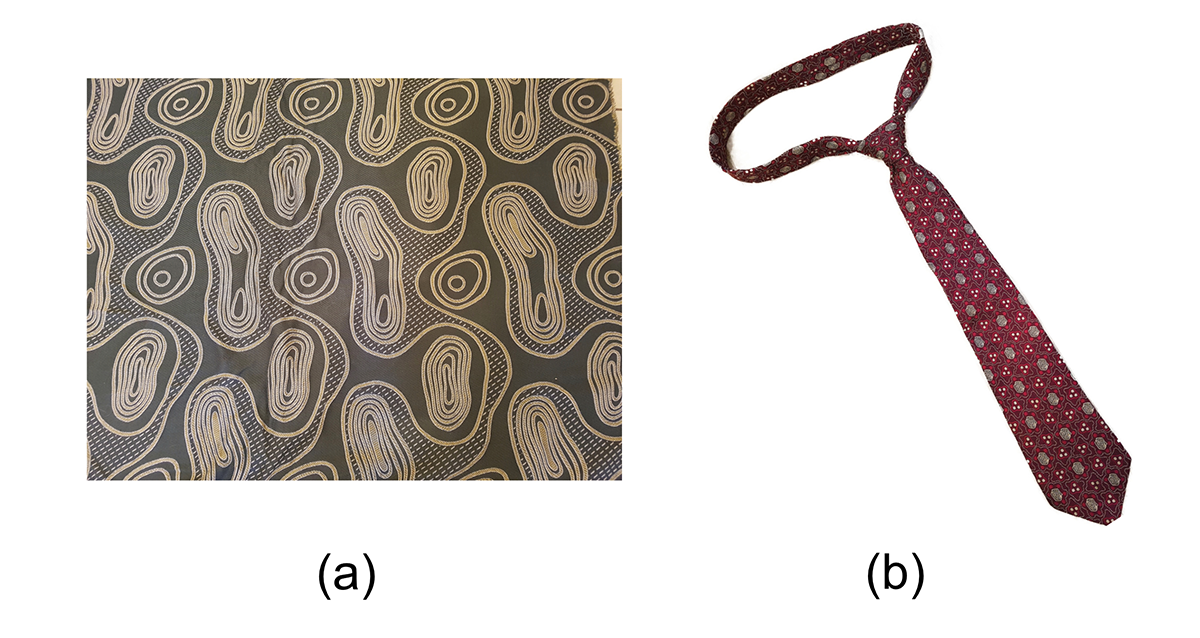 Figure 2. (a) Cloth with design based on Megaw’s afwillite structure. (b) Tie based on Dorothy Hodgkin’s insulin structure.

Figure 3. (a) The Regatta Restaurant at the Festival of Britain showing several crystallographic designs. (b) Cups and saucers. (c) Menus.

Out of interest, you can find many web pages, including film shots, that describe the Festival, for example

It seemed that crystallography was the "in" science of the time pointing to the future. After the Festival closed most of the design materials were lost but then eventually rediscovered and exhibited in 2008. I believe that many of them are now in the Victoria and Albert Museum in London. If you would like to learn more about crystallography and the Festival of Britain, I can strongly recommend getting hold of the beautiful book From Atoms to Patterns by Lesley Jackson.

So, going back to the movie, I can well imagine that the producers or the director at the time, filming near London, must have been well aware of the Festival of Britain during that summer of 1951, and, I assume, decided to add a comment. I do wonder if perhaps Helen or another crystallographer might have mentioned this to the movie makers.

If you know any other examples of crystallography in the movies, do let me know.