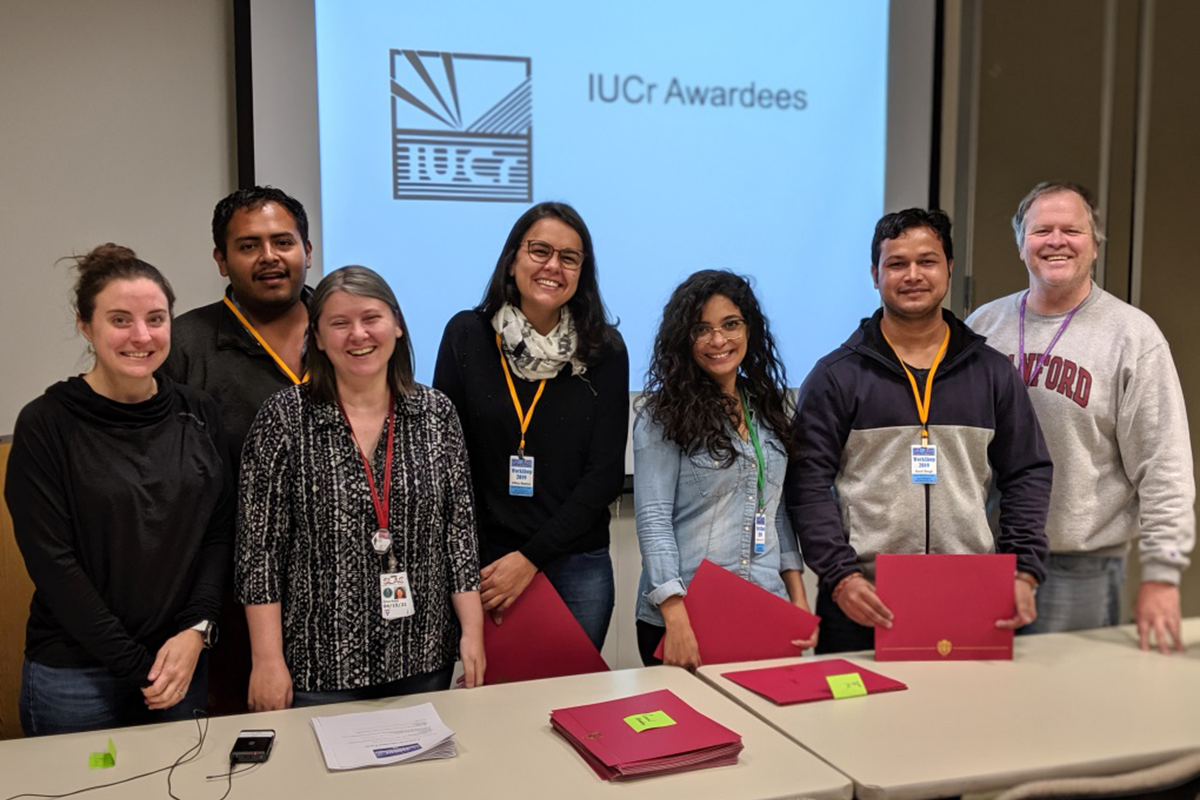 The RapiData@SLAC students consisted of a diverse class of 42 national and international students, ranging from undergraduate and graduate students to postdoc scholars and research associates. One important mandate for all the previous RapiData courses has been to encourage attendance by young scientists from Latin America with the assistance of scholarships from the IUCr. As always, this IUCr support is critical, as the amount of funding available to research institutions in Latin America, Africa and South East Asia for student travel grants has severely diminished over the years. Moreover, as with last year, we have had to substantially increase the size of the awards in order to facilitate attendance of participants from this region. We awarded four scholarships to pay for accommodation and/or travel and subsistence expenses to attend RapiData 2019. The recipients were selected based on a letter of recommendation by their supervisor stating how the student would benefit from attending the course and how their attendance will allow for the dissemination of the practices taught at the course in their home laboratories. The awards were presented during a ceremony on the last day of the course. The co-organizers are also very grateful for the support Stanford Bio-X, MiTeGen and Dectris provided for the program.

At the start of the workshop students attended lectures about macromolecular crystallography and the complementary structural biology techniques of cryoEM and BioSAXS, as presented by Wah Chiu (Stanford) and Thomas Weiss (SSRL-SMB), respectively. The second half of the workshop was split into nine separate tutorials taught in small groups that focused on hands-on data collection at the beamlines and data processing and data analysis with experts in small classroom settings. Additional instructors for the hands-on tutorials included from the Phenix group (Li Wei Hung, Billy Poon, Nigel Moriarty), CCP4 (Andrey Lebedev), Global Phasing (Claus Flensburg) and HKL (Ivan Shabalin), and from SSRL and Stanford University (Aina Cohen, Tzanko Doukov, Edgar Estebanez, Daniel Fernandez, Artem Lyubimov, Irimpan Mathews, Tsutomu Matsui, Ivan Rajkovic, Silvia Russi, Clyde Smith and Jeney Wierman). Students were invited to bring their own crystals to learn the tips and tricks of data collection specific to their own research. Students were given access to the novel data collection capabilities at SSRL, such as controlled humidity data collection and complementary UV–visible absorption microspectrophotometry. Here, the tutors could focus on individuals and answer more personalized questions, such as, “how do I process my challenging dataset?” Although the lecture and tutorial schedule was jam-packed from sun-up to sun-down, it was only natural to include much-needed breaks to give students and experts time to casually mingle and continue mentoring over meals and coffee.

Beyond having crystallography experts gathered in one place, an added benefit of being hosted at SLAC was direct access to experimental facilities at both SSRL and at the Linear Coherent Light Source-II (currently under construction). Students toured the SMB beamlines and both the Coherent X-ray Imaging (CXI) and the Macromolecular Femtosecond X-ray Crystallography (MFX) instruments at LCLS-II [thanks to tour guides Aina Cohen and Meng Liang (LCLS-CXI)]. The co-organizers added a new feature to the program this year in the form of two prominent guest lecturers on separate days. These two experimentalists, who have collected data at SLAC’s LCLS and SSRL, gave pre-dinner lectures drawing direct connection between the experimental techniques being taught in the course and the impact of their results. The guests were then invited to dine with the students and tutors at a catered dinner. The first guest lecturer, Brian Kobilka of Stanford University, rounded out the first day of tutorials with a captivating presentation on structural approaches to understanding G protein-coupled receptor (GPCR) signaling. Armed with humorous quips about the ups and downs of data collection, Professor Kobilka related his past GPCR experiments and framed the place of GPCR signaling, not only in history, but also in biology – a look into the work that awarded him a Nobel Prize in Chemistry in 2012. As approximately half of all medications used today make use of GPCRs, his lectures underlined the importance of the X-ray data collection toolbox the students were learning and mastering through the RapiData@SLAC course. As a wonderful conclusion to rapid-fire five day lecture and tutorial circuit, James Fraser of University of California San Francisco presented an intriguingly titled talk, “Conformational Change We Can Believe In!". His animated presentation described the influence of conformational change within protein structures at varying temperatures and highlighted the recently renewed interest in room-temperature data collection. Here was a direct tie to the newly added room-temperature data collection lectures and tutorials within the RapiData@SLAC circuit.

As in previous years, the organizers presented the IUCr and Stanford Bio-X travel scholarships to students on the final day. The organizers, instructors, tutors and students all shared their satisfaction and enthusiasm for the course, and look forward to continued RapiData courses. With that in mind, planning is underway for the 2020 edition of RapiData@SLAC to be held from 30 March to 4 April.