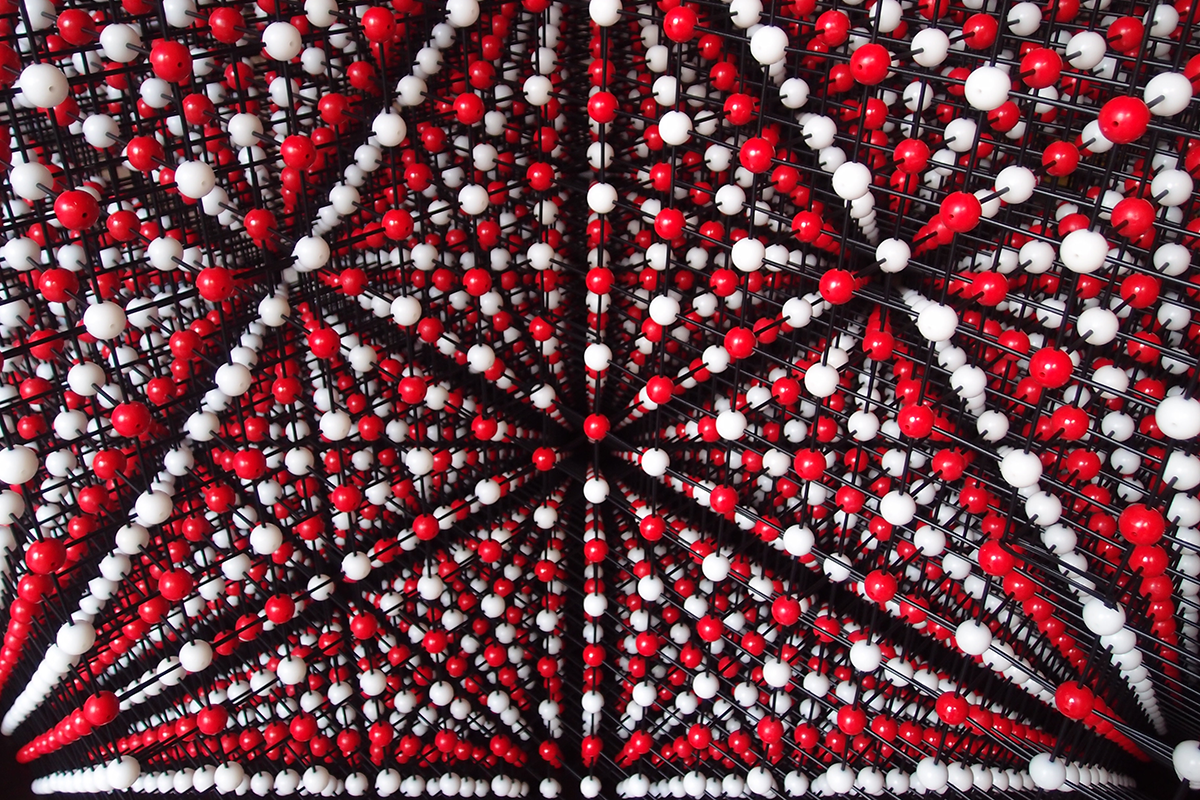 View of the NaCl model down a threefold axis.

Participants in the recent European Crystallographic Meeting (ECM) at the University of Vienna, Austria, had the opportunity to witness a very special exhibit: an over 3-m tall model visualizing the periodic arrangement of atoms in crystals of the NaCl structure type, built from 40,110 red and white balls and, when put side by side, almost 11 km of connecting sticks, glued together with almost 500 tubes of glue. This is the largest ever physically modelled section of the arrangement of atoms in a crystalline solid. Previously a smaller precursor was confirmed by Guinness World Records as an official world record. Looking at the markedly bruised limbs of the tired person standing next to it giving information on how he built the model in several years of work, one may rightly ask: "Why on earth …?". Well, there are several reasons.

The first one is to do with an educational nature. I am an academic crystallographer who has dedicated his life to research and especially to science communication. The model was built to explain the concept of a crystal and to visualize the atomic arrangement of atoms in such a solid – not only a unit cell, but also one multiplied by translational symmetry! – to the general public. Indeed, this was very successful: from assembling in a public space and speaking to many school classes, kindergarten groups and members of the public from over 70 countries who visited the model to giving lectures on crystals and science history. Furthermore, parts of the model (which can be disassembled to modules to fit any required space) were shown at different educational events, museums, exhibitions and conferences. Some of you may remember the "small" part that was shipped to India to serve as an exhibition highlight at the 24th Congress and General Assembly of the IUCr in Hyderabad. Owing to its periodicity, the model provided not only amazing optical effects that served as very popular photo motifs but also a teaching tool for finding symmetry elements and crystallographic planes. 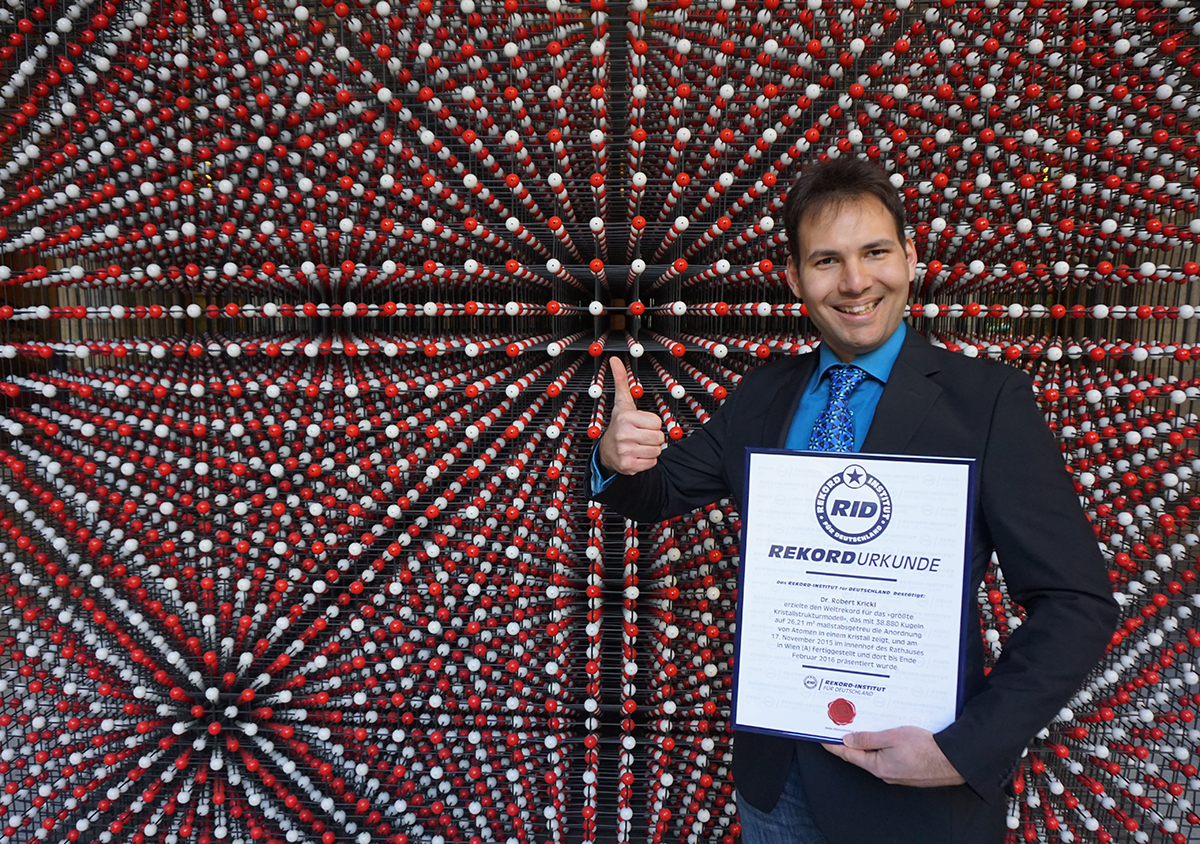 Robert Krickl with an official certificate for the World Record.

The second reason for building the model was to pay tribute to some great achievements in the past. The bulk of the model shown at the ECM in Vienna was finished in 2015 (consisting of 38,880 balls, which was officially registered as a world record back then). That year saw many anniversaries of important milestones in science history, especially connected to crystallography. Nearly 150 years ago, Wilhelm Conrad Röntgen began his academic studies that culminated in his discovery of X-rays, which happened exactly 120 years ago. Over 100 years ago, Max von Laue was awarded the 1914 Nobel Prize in Physics for discovering the diffraction of X-rays by crystals – proving that the latter exhibit a periodic arrangement of atoms. This is exactly what is visualized in the model. Also, following Laue’s work, the father and son team William Henry Bragg and William Lawrence Bragg were awarded the Nobel Prize in Physics for 1915 for the first crystal structure determinations via X-ray diffraction. This had a major impact on science and our understanding of the world. One of the very first structures solved was the one of NaCl – the one shown in the model. 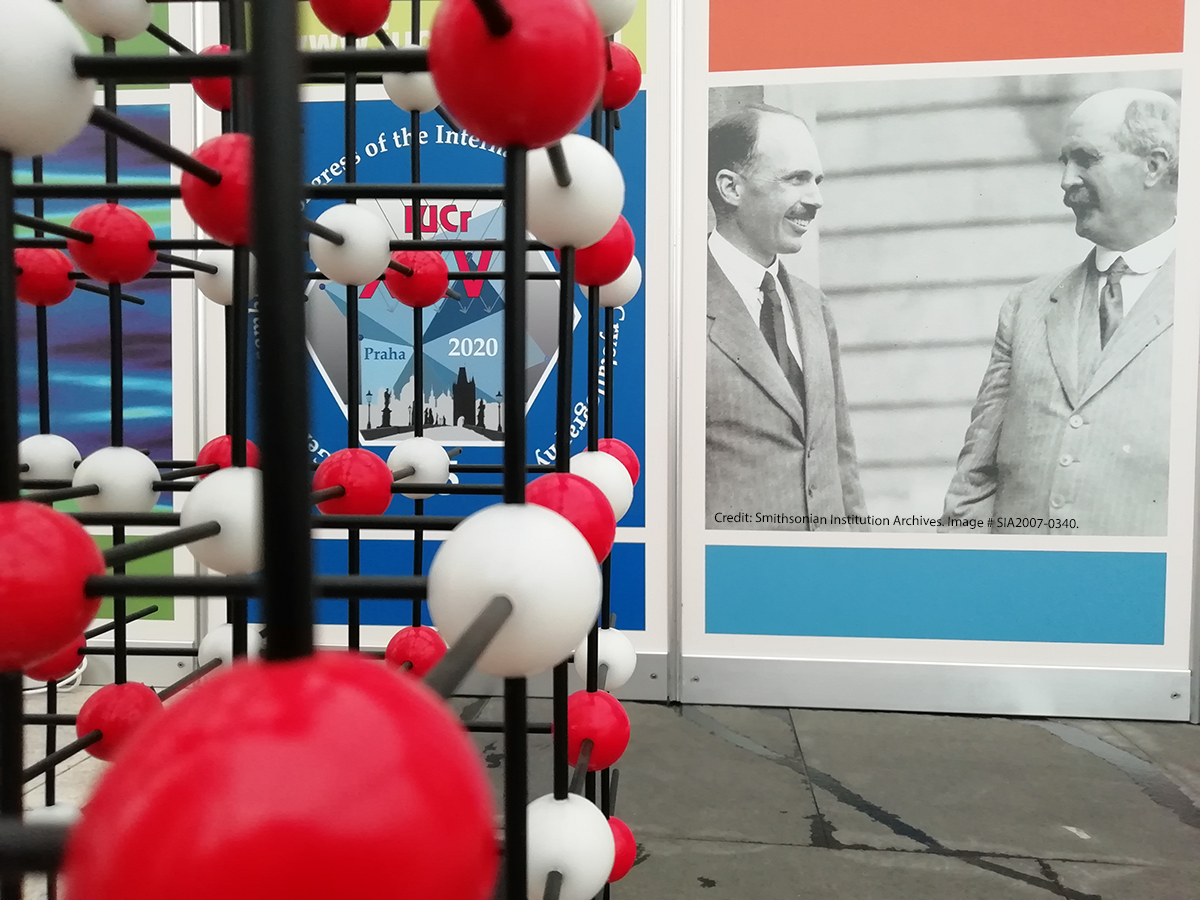 The model served as a place to celebrate the above anniversaries of science history. I was moved to tears on receiving a message from the descendants of W. H. and W. L. Bragg, who had heard about it via BBC coverage of the model. The following sentences are taken from a letter they sent, to be read out loud to the public and scientific community at the official record-setting festivity:

"Congratulations on your great achievement. My sister and I, the two daughters of William Lawrence Bragg, have been thrilled by your tribute to our father. He himself would have loved the whole idea. He was such a visual person. You could not have found a more original and satisfying way to celebrate his scientific legacy. […]"

They also took a unique chance offered in the course of the project: everyone can immortalize themselves or their loved ones by sponsoring balls, which will henceforth be dedicated to that person with any individualized wording (these have even already been used as very special presents for weddings, birthdays and other occasions). There have been dedications to other famous crystallographers too. Companies can also participate. All are visible on the project's homepage and at the site where the model is displayed.

Further reverence was provided via philately. There was a special Austrian postage stamp issued on the world record model in 2015. It was given out at the site of the model on different special envelopes with special stamps, mostly on the occasion of the above anniversaries of science history. Apart from a first- and last-day cover, there was a special one on von Laue, Röntgen and father and son Bragg, as well as on the ECM (you can find all the information here). 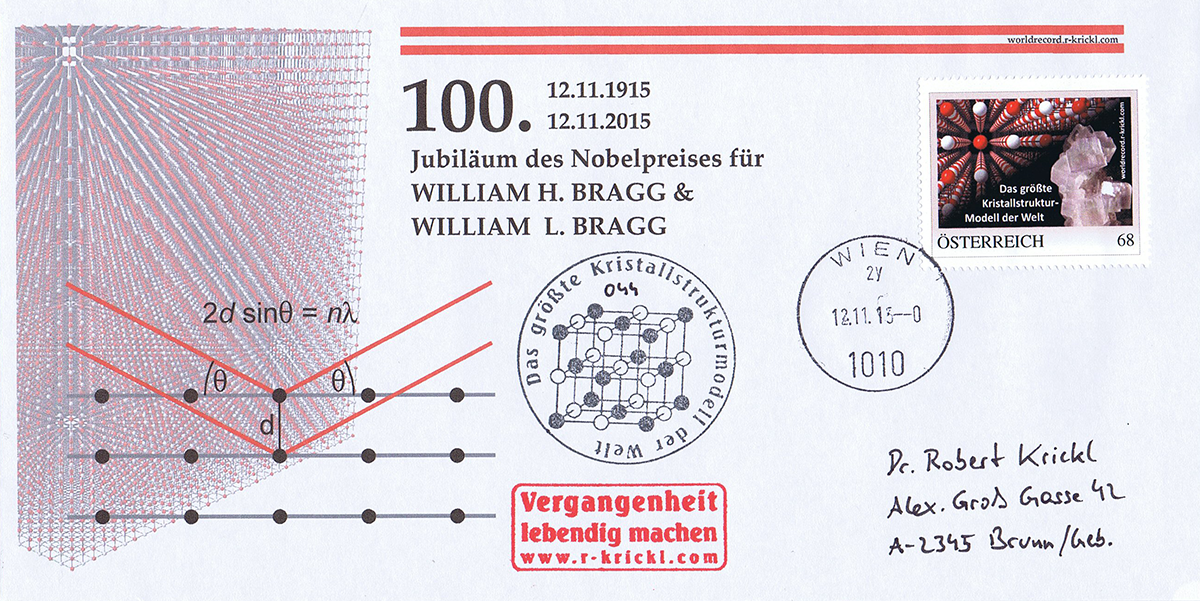 First-day cover in honour of the Braggs.

So what happens next? The record has been achieved, but the project goes on. The model was built for educational purposes, i.e. to communicate science and visualize the nano-universe. It had to be removed from the University of Vienna but some modules are still being shown in different museums, schools and exhibitions. Everyone who wants to exhibit a part of or the entire model, is gladly welcome to get in touch ;).

In the end, the huge experience gained in the course of the construction was not wasted time. The balls were specially produced for this project in order to fit the stringent requirements of statics, durability and precision (bond angles and lengths have to be very, very accurate – otherwise you soon get a problem when stacking dozens of balls). Much investigation and testing took place to find a material and design with the best properties. I want to share this so one can experience the building of crystal structures oneself. I have developed special kits, which can be used at schools and universities, to easily build many different crystal structures – also huge ones. This fills an existing gap in teaching aids on inorganic chemistry, physics and crystallography. With the model and the new kits, I hope to contribute to the communication of science and the beauty of nature at all scales.

You can find more pictures and information on the model at the following: